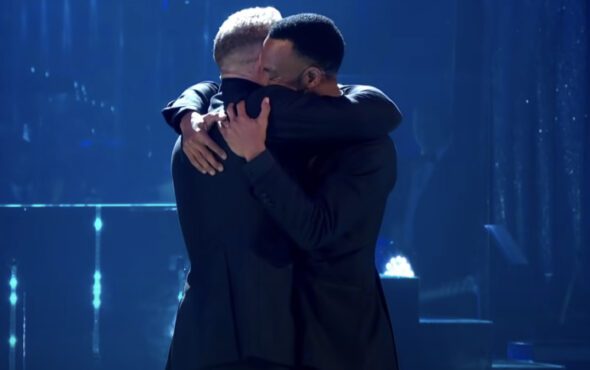 John Whaite and Johannes Radebe stunned the Strictly Come Dancing audience with their first dance this past Saturday (25 September).

Hitting the stage to New Order’s Blue Monday, the two talents gave an enthralling performance of passion, intensity and precision.

Soon after the dance concluded, the couple received a standing ovation from judges Motsi Mabuse and Shirley Ballas.

The two were also awarded 30 points for their routine, which made them the second-highest scoring couple of the evening.

Ballas praised the duo during her critique, stating: “I feel this is a testimony to the same-sex couple. Absolutely brilliant. To go from leader to being led is so hard. Beautiful choreography.”

Anton De Bekeke echoed similar sentiments to Ballas and applauded the couple for performing a “stylish, clean and powerful” dance.

“Last week you said you wanted to make it about dancing and you absolutely made it about the dancing. Just carry on like that and I’ll be delighted,” he said.

On Sunday (26 September), Whaite took to his Instagram Stories to thank fans for their supportive messages.

“I don’t know if it’s the slight hangover, but I’m crying reading all your lovely messages, he said.

“But mostly I’m so proud of Johannes Radebe. His courage to be unapologetically himself will inspire so many – he certainly already inspired me.”

He went on to say that he couldn’t reply to all the messages, but is grateful and thankful for everyone’s kind words.

A week before their incredible debut dance, Whaite and Radebe opened up about the potential impact that their partnership could have on viewers.

“I think for me it’s a case of inspiring young people to not feel afraid or ashamed of who they are. It’s as simple as that really,” Whaite explained to PA.

“When I was growing up, I think if I’d seen two women or men dancing on TV on a Saturday night on a mainstream channel, I don’t think I’d have grown up with quite so much shame.”

Radebe echoed similar sentiments to Whaite and praised the series for being more inclusive.

“Seeing how fast Strictly Come Dancing has come in the years… it just makes me feel proud to be part of the show. And I am so proud of him to allow himself to do this.”

Whaite ended the interview by explaining that their partnership is what the “LGBTQ+ community needs.”

“We have to have it because it’s a representation of true life. It’s not about flag flying it’s not about shouting from the rooftops, it’s about saying this is a reflection of reality,” he explained.

“Because why should it be questioned anymore, you know? We’re just living, and loving, and laughing.”

Check out their full performance here or below.