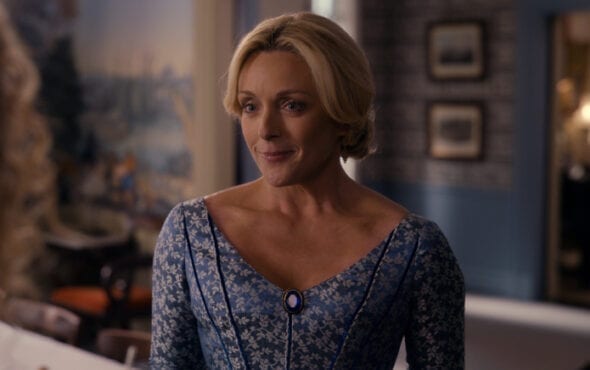 Beloved LGBTQ+ icon Jane Krakowski says she is “honoured” to be a part of the queer retelling of Emily Dickinson.

Jane Krakowski has taken the role of pushy, traditional mother in the Apple TV+ series Dickinson and we love it.

The actress is once more on the small-screen and has effortlessly brought the high-strung role of Mrs. Dickinson to life.

Speaking on the new series, Krakowski admitted she was drawn to the show for it’s feminist takes and modern perspective on Emily Dickinson’s life.

“The scholars of Emily Dickinson believe in her relationship with Sue, and the sort of coming out of that relationship and the adjusting of the true story,” she said in an interview.

Dickinson, a period comedy-drama, deals with a young Emily Dickinson (Hailee Steinfeld) who seeks to write poetry as a respected female author in the 1850s.

The show follows her determination to be recognised as documentation her historically accurate relationship with her sister-in-law Sue Gilbert (Ella Hunt).

In what she labels an “adjusted the true story”, Krakowski believes Dickinson honours the memory of the famous poet and her series’ team does well to authentically honour her legacy.

“We have such a diverse LGBT+ community [behind the scenes] and I love that. I think we not only talk about it on the show, but we’re living it backstage too, and that is a wonderful world to be a part of,” she explained.

“I do feel that Emily Dickinson was a very early feminist of her time, and although she never really left home and never married per se, I think those were all very modern woman stances to take at that time.

Obviously, we see that very strongly in Dickinson season one, where she is not following that path that her mother would like her to take of what traditional women and conventional women would have followed in a patriarchal society at the time.”

Season 2 of Dickinson is out now on Apple TV+ and you can watch the trailer here and below: