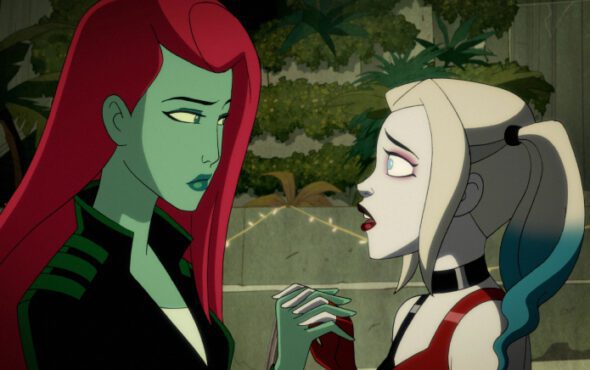 For the last two years, comic book fans have flocked to HBO Max to follow the anti-hero’s violent yet hilarious quest for supervillain stardom.

While the series has earned critical acclaim for its creative storylines, fans have also praised the show for exploring the popular Harley and Ivy romance.

After a series of “will they won’t they” moments, the two villains finally cemented their romantic relationship in the action-packed season 2 finale.

In an interview with AV Club, Harley Quinn showrunners Justin Halpen and Patrick Schumacker discussed the popular couple and revealed that they’ll never break up in future seasons – despite some fan outcry.

“For me, we still have the occasional fan reaction of ‘I don’t like Harley and Ivy together. She should get back with the Joker,’ which we’re never going to do,” Schumacker said.

“Harley and Ivy will never break up in the series as long as we have a say. That’s something that we never want to touch again.”

A post shared by Harley Quinn on HBO Max (@dcharleyquinn)

Elsewhere in the interview, the two creatives discussed the slow-burn romance between the two characters, stating: “It was always a place we wanted to get to, but we wanted to make sure that we were telling a story first.

“How is Harley figuring out her own identity? What sort of self-discovery is she doing after this relationship with the Joker, right?

“And so if you just had her jump right back into another relationship right after that, because the fans are like, ‘Why aren’t they together right away?”… would you want that.”

Towards the end of the interview, Halpen and Schumacker credited the show’s acclaimed LGBTQ+ content to the talented queer creatives in their writer’s room.

“We would credit probably Sabrina Jalees, who was a writer on season two and is queer, for being the one to tell us, ‘Please don’t do a coming out story.’ I think that was maybe our initial instinct,” Schumacker said.

Halpen added: “Which is a perfect example of why you populate a room with other voices who aren’t afraid to tell you what you’re about to do is stupid, your show just comes out better. Probably left to our own devices, we would have fucked it up.”

You can watch the first three episodes of Harley Quinn season 3 on HBO Max in the US.