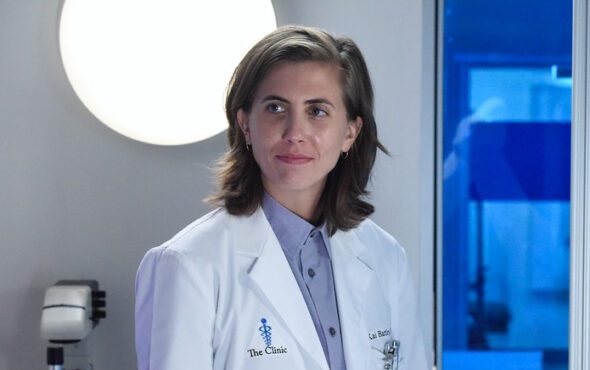 Grey’s Anatomy is continuing to break boundaries by introducing its first non-binary doctor to the series.

On the latest episode of the long-running medical drama, non-binary actor E.R. Fightmaster made their debut as Dr Kai Bartley.

During a trip to Minnesota, Meredith and Amelia meet Kai at a well-funded hospital that’s researching a cure for Parkinson’s.

In an official character blurb from ABC, Kai is described as “dedicated to their craft and extremely talented at what they do.”

The description also gives us a sneak peek into their relationship with Amelia Shepherd, who appeared to know all about Kai’s research in the episode.

“Confident as hell and able to make even the most detailed and mundane science seem exciting and cool, Kai and Amelia bond over their shared love of medicine and the brain,” the description continued.

After the release of the episode, fans took to Twitter to point out the undeniable chemistry between the two characters.

Another user tweeted: “The way Kai tried to guide Amelia in meditating SCREAMING CRYING BUTTERFLIES IN MY STOMACH.”

According to a report from Variety, the new fan favourite will be a recurring character across several upcoming episodes.

This isn’t the first time that Grey’s Anatomy has featured LGBTQ+ actors in leading roles.

Trans actor Alex Blue Davis also made history as the first transgender doctor on the series during his three-season run.

Grey’s Anatomy is set to return on 11 November on ABC.

OMGGGGG AMELIA AND DR. KAI!!! WE ARE DEFINITELY WINNING!!! #GreysAnatomy

am i the only one who got those flirty vibes from BOTH amelia AND kai? just by the way they look at each other! it gives me “love at first sight” vibes lol i’d give (almost) everything to see them become a thing #GreysAnatomy pic.twitter.com/1ftxm2aHnb

So what is Amelia & Kai’s ship name?? 👀👀 #GreysAnatomy #greys pic.twitter.com/Je0ND3DjYn

That scene with Amelia and Kai… 🔥🔥#GreysAnatomy pic.twitter.com/HGlqdF1uFI

Amelia Shepherd needed that Ice pack on her neck because of Dr Kai Bartley being so freaking HOT across the FACETIME call #GreysAnatomy pic.twitter.com/6paWZc8CsI

Amelia and kai on video call 😫😫😫😫 is it hot in here #greysanatomy pic.twitter.com/cUwfjeg70G