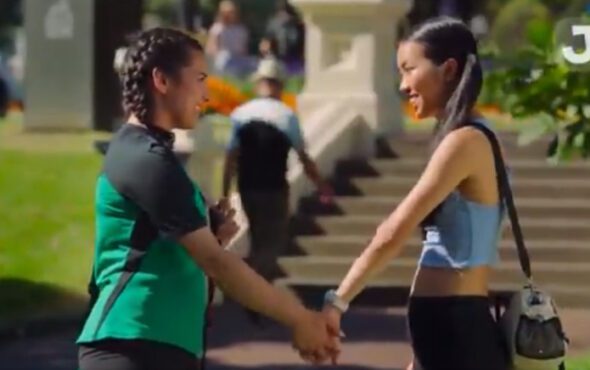 Power Rangers has made history by introducing the series’ first LGBTQ+ character in an upcoming episode.

The other characters are shown discovering her sexuality, but the episode depicts being part of the LGBTQ+ community as a normal aspect of her life.

There is no major coming out scene or big reaction from the other Rangers, but instead just an intimate moment of her walking with her girlfriend.

Simon Bennett, the show’s executive producer, took to Twitter to share his excitement over the historic scene.

“Very happy with the reaction to Power Rangers #dinofury episode 13, which has just aired in France,” he wrote. “Really looking forward to when it is available in the US, and I can jump into discussions.”

Bennett also responded to a fan who called the scene a “marketing ploy” to acknowledge that Power Rangers should have included LGBTQ+ representation a long time ago.

“I assure you, it was no marketing ploy. And yes, well overdue,” he said.

Very happy with the reaction to Power Rangers #dinofury episode 13, which has just aired in France. Really looking forward to when it is available in the US, and I can jump into discussions.

Responding to another fan, who was elated by the episode, Bennett shared that he is “very pleased” and that it is “about time” the show became more inclusive.

The scene occurred during episode 13 of Power Rangers Dino Fury’s 28th season, which is currently airing on Nickelodeon.

Izzy’s character makes history as the first LGBTQ+ representation in a mainstream Power Rangers television series, but it is not a first for the franchise as a whole.

In the 2017 Power Rangers movie’s second act, Yellow Ranger Trini Kwan (Becky G) is seen struggling to come to terms with her sexuality.

“For Trini, really she’s questioning a lot about who she is,” scene director Dean Israelite said at the time. “She hasn’t fully figured it out yet. I think what’s great about that scene and what that scene propels for the rest of the movie is, ‘That’s OK.’ The movie is saying, ‘That’s OK,’ and all of the kids have to own who they are and find their tribe.”