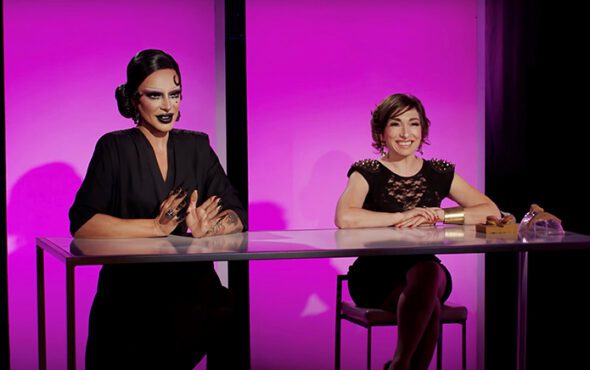 Naomi Grossman will be making her debut as a guest judge on Painted with Raven in this week’s episode.

In an exclusive clip shared with GAY TIMES, the actress talks with Raven about all things makeup and American Horror Story.

The star played fan favourite Pepper in both Asylum and Freak Show, which she revealed took a lot of makeup.

“So this is the Pepper face,” Naomi says as she gets out the prosthetic mask she would wear on set as the character.

She proceeds to place it on her face, instantly transforming her into Pepper as she explains that the eyebrows were handsewn.

“I mean this costs more than me,” Naomi tells the Drag Race star. “Pepper’s makeup is infinitely more expensive than her acting, I’m sure!”

Raven then reveals that when she first watched American Horror Story, she “didn’t realise it was a prosthetic” because of how “seamless” the makeup and acting was.

“I thought, ‘Wow! What an odd looking person,’” she explains.

Naomi adds that during filming, there were people on set who struggled to make eye contact with her because of her appearance as Pepper.

“People’s reaction to your character speaks to the power of makeup,” Raven tells the star.

With only two episodes left and just four points separating the top four competitors of the season so far, it’s all still to play for on the show.

Painted with Raven sees the queen search for the next makeup artist sensation as they compete from the comfort of their own homes.

“Every single one of these artists is completely different and they all bring such wonderful takes on each challenge that’s presented and I think that’s what I’m most excited about,” Raven previously told GAY TIMES in an exclusive interview you can read here.

The full preview of Naomi’s appearance on episode seven of Painted with Raven can be found below or by clicking here.

Watch Painted with Raven exclusively on the streamer of all things drag, WOW Presents Plus. Subscribe by clicking here.