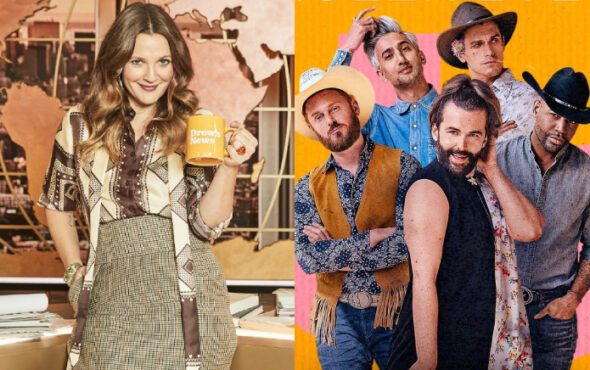 Drew Barrymore has revealed that the Fab Five from Queer Eye inspired her to date again.

In an interview with ET, Barrymore revealed that the Netflix stars gave her a gentle push into the dating scene.

“Things do not magically fall out of the sky onto your lap. We all got to get proactive in our lives and I have been apprehensive to ever do anything virtual, the dating apps,” she revealed.

Back in 2016, the Charlie’s Angels actress filed for divorce from her then-husband Will Kopelman.

Over the years, the mother of two has remained single while figuring out how to date as a single parent.

“A lot of us out there who stay single for a really long time can start to get an inner dialogue of, ‘Maybe there is something wrong with me,’ rather than realizing it can be an empowered choice,” she said.

“And in my case, I really wanted to honour raising two daughters.”

A post shared by The Drew Barrymore Show (@thedrewbarrymoreshow)

But it was wise words from Berk that changed the course of Barrymore’s romantic outlook.

“What Bobby said to me, which honestly was one of the most healing moments I have had in the last decade, is he said, ‘Your apprehension and cautiousness is what helps make you a good parent,'” she said.

She went on to say that hearing those comforting words from Berk was a “real gift” in regards to her worries about dating affecting her parenting priorities.

“To have him say that to me, was something that I really think I needed to hear,” she said.

Later in the interview, the talk show host praised the Fab Five for helping with her virtual date with Top Chef star Sam Talbot.

“It was so fun. I had Jonathan [Van Ness] holding up, like, silly questions and naughty signs making me giggle. I had Tan [France] saying, ‘Hey, I notice something over there,’ like, ask him about that,” she explained.

“I had Antoni [Porowski] tell me, ‘You are doing a good job’ and I had Bobby going, ‘Hey, I see plants and dogs, see how he is a caretaker,’ it was, like, every person. I do feel like I was on their show.”

The exchange comes a few weeks after the sixth season of Queer Eye premiered on Netflix.

In the latest series, the Fab Five head to Texas to help out an array of heroes including a honkey tonk owner, a no-nonsense rancher, a transgender powerlifter and a high school prom committee.

Check out the heartwarming collaboration and the chaotic date below.