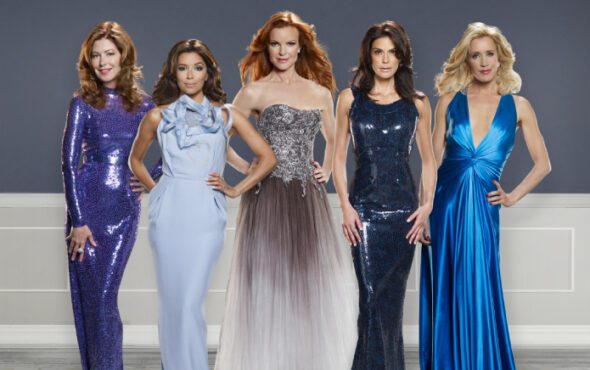 Desperate Housewives could be making a long-awaited return sometime in 2022, exactly a decade after it aired its final episode.

After ending the show on the cliff-hanger of what secret new neighbour Jennifer (Lindsey Kraft) was hiding, fans could be about to get answers.

Alongside the message was a seemingly brand new photo of the four original housewives alongside Katherine Mayfair (Dana Delany), reminiscent of the promo shots that used to be released ahead of each new season.

The five can be seen standing fiercely in floor length gowns, ready for whatever is coming.

Details beyond that remain scarce, most notably whether or not Vanessa Williams will be reprising her role as Renee Perry should the show be making a comeback.

Although the message may seem insignificant, the official page has rarely been used since the end of Desperate Housewives – with just one tweet being sent out from it in 2020 and the latest update being just the seventh posted in 2021.

The account is now typically used to promote other shows or reminisce about past Desperate Housewives moments, with this being the first hint at the revival of the series since its end in 2012.

The return of the original housewives is also plausible as Eva Longoria, the actress who played Gabrielle Solis during the show’s original run, previously told Radio Times that she would be “the first to sign up” for a film or reboot.

“I mean, we ended the series with [Gabrielle] going off to start her own business. So I’d love to pick up and see like how she’s grown that business,” she told the outlet. “Is she, you know, Kris Jenner? Just fabulous and flying all over the world and managing all of these businesses.”

When viewers last saw the ladies of Wisteria Lane, each of them got the happy ending they deserved after years of drama, scandals and affairs on the street.

In a time jump spanning decades, it was revealed that Lynette Scavo (Felicity Huffman) became a CEO and moved to New York with husband Tom (Doug Savant) where the two happily lived out the rest of their days with their grandchildren.

Gabrielle set up a personal shopping website that eventually became a TV show, resulting in her family moving to California where she “argued happily ever after” with her husband, Carlos (Ricardo Antonio Chavira).

Bree Van de Kamp (Marcia Cross) ended up marrying the lawyer who defended her during her murder trial during the show’s final season and the two eventually move to Louisville, Kentucky where Bree became a member of the state legislature.

The fate of Susan Delfino (Teri Hatcher) was, however, never revealed to viewers – making it possible that this could be the plotline bringing the show back after all these years given that the ladies no longer live on the beloved street together anymore.

Desperate Housewives ran for eight seasons from 2004 until 2012, making history as the hour-long television series featuring all-female leads with the most episodes (180 overall).