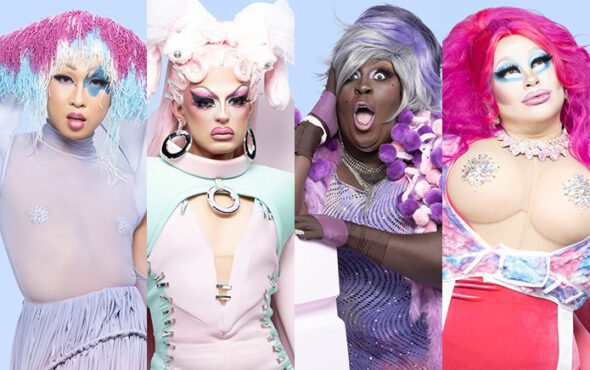 The 12 fierce drag queens competing on season two of Canada’s Drag Race have been revealed by World of Wonder.

Brooke Lynn Hytes has been confirmed to return as the series’ main host, which will see her judge the contestant’s charisma, uniqueness, nerve and talent once again.

The drag superstar said she’s “thrilled and honoured” to return for season two, before hailing it as “fresh, fierce and fabulous”.

Also joining the Drag Race US alum will be actress Amanda Brugel and style superstar Brad Goreski in place of Stacey McKenzie and Jeffrey Bowyer Chapman.

Traci Melchor has also been upgraded to a permanent judge after spending the first season mentoring the queens in the format of a “Squirrel Friend”.

“Joining Canada’s Drag Race as a judge is a dream come true,” Melchor explained. “I’ve been invested in this franchise since the beginning, and every season I see its impact in the lives of the queens it features and the community it celebrates.”

“There’s no other show that brings the funny, the fabulous, and the family together quite like Drag Race!”

The show will follow the same format as its debut season, with one queen being eliminated at the end of each episode until Canada’s next Drag Superstar is crowned.

They're serving you sugar and spice. Feast your eyes on the queens of #CanadasDragRace season 2! Coming to @CraveCanada October 14. 🇨🇦 pic.twitter.com/pG0qqZ24UD

Season two will air exclusively on WOW Presents Plus from 14 October, just over a year after Priyanka was crowned as the first winner of the show.

This year’s queens will see the queens battle it out for a $100,000 cash prize and all of their introductions can be found on WOW’s YouTube channel now.

“I’m so excited for these QUEENS,” Brooke Lynn wrote on Twitter.

Canada’s Drag Race season two will air weekly from 14 October exclusively on the streamer of all things drag, WOW Presents Plus.