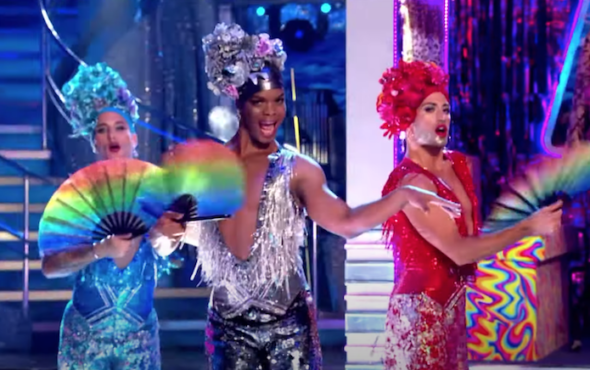 The BBC has responded to over 150 complaints received over Strictly Come Dancing’s drag routine.

One of the nation’s favourite prime time series, Strictly Come Dancing has become a much beloved TV staple. This year we have seen the show broaden its horizon with the inclusion of same-sex dance partners which was widely praised by viewers and contestants.

Dressed up in incredible outfits and drag make up, the dancers offered a stunning tribute the musical Priscilla, Queen of the Desert.

However, while the performance received a brilliant reception from both judges and on social media, the opening number received close to 150 complaints to Ofcom.

In a statement, the BBC defended the performance, saying: “Strictly Come Dancing’s theme weeks prove very popular with viewers and to kick off this Musicals Week special the professional dancers pulled out all the stops and paid homage to the musical Priscilla, Queen of the Desert, which has received universal acclaim.”

The statement continued to emphasise the fun and appropriate nature of the routine.

“It was intended to be a fun and entertaining musicals dance for our viewers who are used to and expect Strictly to be glamorous.

“We feel that it’s important to allow the choreographers and professional dancers to exercise creative freedom when putting together routines for a programme of this nature. Strictly is an inclusive show and we always ensure that the programme’s content is appropriate.”

Strictly Come Dancing judge Craig Revel Horwood also called out the high number of complaints following the dancers’ routine, declaring: “If you can’t grow with society then turn it off.”

On Tuesday (December 8), Craig commented on the situation while speaking to TV host Steph McGovern.

“I think it’s madness,” he admitted. “It’s a form of theatre. They’re artists, they’re dancers and they are involving themselves in characters.

“I was just really sad that I didn’t make an entrance. I was so jealous, I wanted to be in there with a big blue emu on my head!”

Continuing, Craig went on to elaborate further on the complaints received: “I think it’s mad for people to complain about something like that… It’s theatre. It’s from a show called Priscilla, Queen of the Desert. If you haven’t seen that movie, I suggest you go and watch it and see why they were doing what they were doing.

“It’s not just for fancy dress, they were representing a very real movie and a musical on stage. I think it’s crazy, and I think the people that are complaining just need to turn onto another station.”

Priscilla, Queen of the Desert is a widely acclaimed comedy-drama that is familiar with most in the LGBTQ+ community. The film follows two drag queens and a transgender woman on their journey across Australia.

Watch a snippet of Saturday’s sparkling drag performance here or below:

Serving body, serving face, serving sequins for days ✨ Our #Strictly Pros know exactly how to bring it to the Ballroom! pic.twitter.com/sbiPrF9kk1