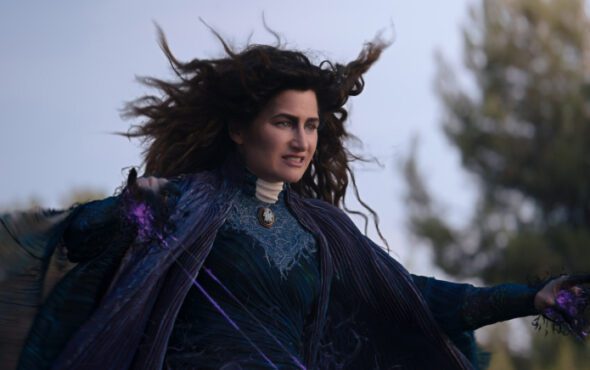 Disney Plus is reportedly developing a WandaVision spin-off that will follow everyone’s favorite witch Agatha Harkness.

According to Variety, sources have revealed that Kathryn Hahn has been confirmed to reprise her iconic role.

Details surrounding the plot have been kept under wraps but the series has been described as a dark-comedy.

Jac Schaeffer, who was the head writer on WandaVison, is also set to return as the writer and executive producer for the new show.

Harkness was first introduced into the Marvel Cinematic Universe as Agnes, Wanda and Vision’s nosey neighbour.

At the end of the series, it was revealed that Agnes was really Agatha Harkness – a survivor of the Salem Witch Trials and one of the Earth’s most powerful witches.

Wanda later trapped Harkness in the town of Westview under the influence of her fictional Agnes persona.

Since her introduction into the MCU, Hahn has been praised for her hilarious and multi-layered performance.

Her portrayal even earned her an Emmy nomination for Best Supporting Actress in a Limited Series category.

Alongside her upcoming MCU spin-off, Hahn is also attached to star in a limited series following the iconic late comedian Joan Rivers.

The project, which is titled The Comeback Girl, is set to follow Rivers’ life after the cancellation of her 1980’s late-night talk show and the death of her husband Edgar Rosenberg.

Her other upcoming projects include the Knives Out sequel and the upcoming Apple series The Shrink Next Door.

Check out some of the fans reactions to the spin-off news below.

Monica Rambeau show and Agatha Harkness show are coming .all i can say is that they are going to EAT . pic.twitter.com/x7ltnAJhSN

I see there is going to be a spin off show of WandaVision with Agatha Harkness on Disney+. That sounds like fun 😁👍🏼 pic.twitter.com/RkoUtME0h7

I’ve been ia for a while and now we’re getting an Agatha Harkness show?!?! AAAAAAAAA 💜💜💜 pic.twitter.com/fN8AnbtHWI

I need this Agatha Harkness show to have the same TV time hop premise as WandaVision. Kathryn Hahn as lead is going to be funny and iconic af 🔥 pic.twitter.com/HUhNGHx7oU