Wolf Cub is a captivating coming of age tale – review 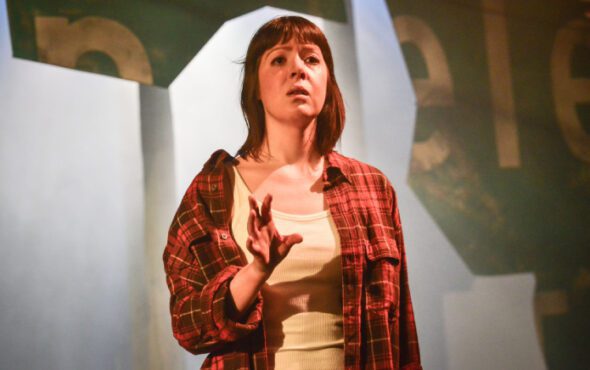 Written and directed by Ché Walker, Wolf Cub is an 80-minute monologue written in the wake of Trump’s election and focuses on a dark side of American culture and politics. Set during the Reagan administration of the 1980s, it tells the story of Maxine – played by the captivating Clare Latham – as she grows up, initially in the rural Deep South but relocating to urban Los Angeles and learning to adapt and survive. It’s a fascinating coming of age tale; difficult to watch at times, but engrossing nonetheless.

It tackles a wide array of tricky subject matter. From a personal perspective, our protagonist is having to deal with being abandoned by her mother, suffering at the hands of her abusive father and navigating a dangerous and violent outside world all at a very young age. The action unfolds against a backdrop of major social and political events from the 1980s and early 1990s, ranging from Nicaraguan Contras to the LA uprising and the Northridge Earthquake. There’s a lot to take in.

The subject matter may be relentlessly serious, but there’s a lot of dark comedy to be found here. Latham is a perfect fit in the role, playing nightmarish scenarios for laughs with a knowing look. As enchanting as her humour is, however, this is a performance with real range – she never lets us forget that she is also a feral hunter who will do anything to survive the hand she’s been dealt, as the play’s title implies. Throughout the show we have mini dreamlike sequences where Maxine imagines herself transforming into a wolf; this may sound a bit of a stretch given the play’s otherwise gritty realism, but it works surprisingly well.

We were completely captivated by Wolf Cub – it’s an intelligent monologue performed brilliantly by Clare Latham. Throw in some music from Olivier-winning actress Sheila Atim – which really adds to the atmosphere – and what we have is a captivating monologue which really flies by. Impressive stuff.