Todrick Hall on Chicago, All Stars 4, and who his bestie Taylor Swift would stan on Drag Race 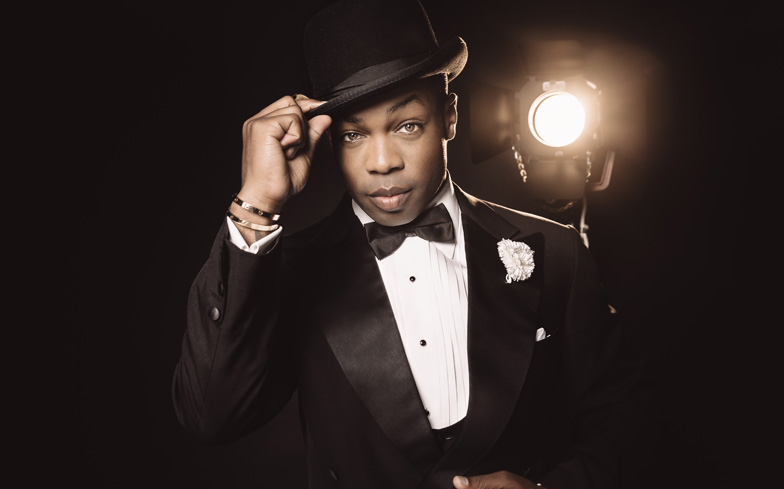 The YouTube sensation and now West End leading man on turning dreams into a reality with his latest project, and who his bestie Taylor Swift would totally stan on Drag Race.

He’s the RuPaul’s Drag Race judge that taught us about Dem Beats via his addictive solo music and how to totally serve it up in a pair of killer heels. Now, he’s taking killing to a whole new level as he joins the six murderesses of Chicago to make his West End debut in musical Chicago.

But what brought Todrick Hall from the famously fabulous Hollywood Hills to the bright lights of London’s Theatreland? What can we all expect from All Stars 4? And when can we expect his bestie Taylor Swift to be a judge on Drag Race?

Strap in hunni as we found out.

How has it been making your West End debut in musical Chicago? Has London been kind?
I’m so completely blown away, flattered and in awe every single day that this is a true chapter of my life, and that I’m getting to live here in London. My first ever boyfriend lived here. I was so poor growing up that it seemed like some type of whimsical antsy that I would be able to come here, and for me to be living here and my fans to be able to come to the show is really surreal.

This isn’t your first time in this role having played Billy Flynn on Broadway. What made you want to return to the role?
If I’m being completely honest, it’s more the show than it is the role; the experience to come to London and spending time here. As an artist, sometimes you search, you’re grasping at straws for things that will inspire you to write new music, and I want to write a Broadway musical and a book. There’s so many things that I’m excited about and I love this show and the message. I think it’s so cool that the sense of humour the writers had and the fact it’s a show where you’re actually rooting for these two murderesses to get off. What other type of show could that happen in? I also feel like the world has become so extremely over sensitive in some ways that if this show was written today and wasn’t the Broadway classic that it is, this amazing story might not even be able to be told. I love the fact it has existed, it’s already a classic that will always be around, and I’m excited to be able to play it – even though I think I’d have more fun playing Mama Morton or one of the murderesses.

Were you in the producers ears asking for them to let you have a crack at either of the leading female roles?
No, I wasn’t because I’d just done so many videos where I was androgynous or in drag of some sort, and I’d just played Lola in Kinky Boots and have been Billy Flynn on Broadway before. A fun fact is that I did come in to audition for the role of Mary Sunshine, but when I got there they asked for me to sing through Billy Flynn. I didn’t think it would be a real possibility and never imagined myself to be him. I was super insecure about taking on the role as I never want to be that person who is completely content at taking away jobs from working actors that would normally be more fitting for the job just so I can sell a ticket. The producers assured me that’s not the reason why I was going to be in the show and they thought I could bring something new and fresh and more contemporary to him.

So what is your take on Billy Flynn like?
I imagine he’s a guy from the hood where I grew up but he has learnt all these street-smart things that are skills that help him manipulate and weave his way through life. He’s also still poised to stand in front of a court and convince them of something they themselves know is not true. Basically, he’s a person who is paid good money, $5000, to be a scam artist and I think that’s kind of brilliant. He’s found a way to legally find a way to do what he learned how to do on the street.

urder charges aside, it’s great to see a show that champions the strength of women.
I do think that is really powerful and while I don’t condone women shooting their husbands, especially for the reasons these two women did, I do think it’s awesome they took power into their own hands. There’s so many stories of women who sat around and did nothing about their husbands abusing them, cheating on them and treating them poorly. I do think that it’s really important to have powerful women on stage telling stories that really make women feel confident in the clothes they wear, the way they are unapologetic about how they feel and what they did – and they totally felt like he had it coming, that he deserved exactly what he got, and in some cases these men were being complete assholes and unfortunately in the case of Fred Casely, Roxie – who is my favourite character in the show – is probably the most guilty of being
somewhat crazy.

How do you think the West End and Broadway does in regards to tackling homophobia?
Being someone that’s writing a musical that deals with the subject matter, I’m a little bit nervous at times. You ask yourself as a businessman vs an artist if it would be wise to tell a story that would be digestible by a family audience. Hopefully very soon a family will be able to digest a story that’s about a gay couple just as much they will a straight couple. I had no issue falling in love with Noah and Allie in The Notebook, even though I knew that wasn’t going to be my story. There were not really even people who looked like me in those stories, except for dancing or in the band, but I still felt the love and knew I was never going to marry a girl like they were. Love is such a powerful thing that people can look past their ego and look at what a beautiful thing it is when anybody falls in love. We can watch a fox and a hound or Disney characters or inanimate objects which are just drawings fall in love and feel it, but when we see two men or two women, there’s a block that’s been taught to us. I know it’s going to happen, I just hope I’m alive to see it happen.

I’d also like to point out that I’m an openly gay man. When you look me up on the internet, you’re bound to find pictures of me dressed as a woman and in heels. For the casting team at Chicago, that was never something that was brought up or anything they’ve come to me giving notes about Billy being too feminine or ready to walk on the runway at RuPaul’s Drag Race All Stars. That’s progressive in itself because, a time not too long ago, a producer would have said that somebody that’s so publicly gay is not going to be a leading man in this musical. Even though my fans come into the show knowing I’m gay, and he has no love interest in the show, women are flirting with him and pinching his butt – which he’s into.

To flip it around, what are your thoughts on straight actors playing LGBTQ roles?
It’s difficult for me sometimes to see the conversations online about straight guys being able to play gay characters or vice versa. We’re in a really cool place politically where people are totally down to stand up for trans people having the right to play trans people on television, but I think that we need to take it a step further and I don’t think anybody would be offended if a trans woman played a cis woman in a movie – that hardly even happens. I’m in the small percentage of people, and I hope I don’t get dragged for saying this, and I have no issue with a straight man playing a gay character if he’s a great actor. I thoroughly enjoyed Call Me By Your Name. I would like to challenge the casting directors to allow more gay people to play straight characters if they’re going to take the very limited amount of roles we get to play and give them to straight people. I’d like to see it on both sides.

So… are you excited about All Stars 4?
I’m so excited! I’m the biggest RuPaul’s Drag Race fan so it’s the hardest thing I’ve ever done to not spoil the show and not leak something I know in advance. Every time you see a cast list, you say who you think is going to go far and when you watch the first three episodes you think you’re going to win. At the end of the day, you never know. You don’t know and these drag queens are unpredictable. It’s those eliminating each other so the best woman may not necessarily win, but I think the top four is awesome with some people who are expected and some that will shock.

I’m #TeamLatrice all the way. It’s got to happen.
I love me some Latrice!

I don’t understand why your bestie Taylor Swift hasn’t been on the show yet?!
I know Taylor Swift is a huge fan and champion of the queer community but she hasn’t actually watched episodes of RuPaul’s Drag Race yet. I feel that it’s my responsibility to make her sit down when she’s here in London and watch a few episodes. In fact I’m going to text her after this interview and say this has to happen. I know her so well and I know she will absolutely fall in love with all these queens. I’m a little nervous I’m going to be replaced by one of these people because there’s so many I know she would fall in love with.

But who would be her favourite queen?
If I could pick who her favourite drag queen would be? I would think it would be somebody like… either Adore or Trixie. A Taylor Swift song would be epic for a lip sync – but which one? I would love to see a lip sync to Style where people have to do a costume reveal and change their fashion. Obviously Ready For It? would be a banger.

Outside of theatre, Drag Race and being a bestie of Taylor, do you have plans for a new album?
I don’t know if there will be a new album but there’s definitely new music. I’ve been writing here. Part of the reason I took this job was to spend every single hour not on stage writing music and I’ve been doing that. Being inspired by this amazing city, I’m excited about and feel different to what I’ve done but while still on brand. It won’t be a visual album in that there won’t be a story or strong narrative, just a collection of bops.

Oh good, because if I play Dem Beats one more time, my boyfriend will break up with me.
Don’t make him break up with you! I will put out new music that you can then annoy him with.

More information on Chicago can be found here.