We can’t wait for the return of Olivier-nominated gay play Cruise to the West End – we caught the original production last year at the Duchess Theatre, and now it’s returning later this summer for a short run at the Apollo Theatre. Set in Soho in the 1980s, the play introduces its audience to Michael, a gay man who is diagnosed with HIV in 1984 and is told he has four years to live. With the clock ticking, he decides to make the most of the time he has left. Cruise was one of the first plays we saw post-lockdown, and we described it at the time as “a potent reminder of the power of live theatre” before awarding it a perfect score.

Cruise will play at the Apollo Theatre from 13 August to 4 September this summer. Ahead of this run, we caught up with playwright Jack Holden to find out a bit more about the show and what inspired it. So, what’s it all about?

“Cruise is based on a true story I heard when I volunteered at Switchboard, the LGBT+ helpline, in my early 20s,” says Jack. “It was a call from a guy who had been in his 20s in the 1980s: he had moved to Soho, discovered the gay scene at the time, he’d fallen in love, really found his home and his tribe. In 1984 he and his partner both got diagnosed with HIV, which at the time was a death sentence as there was no effective medication. They decided to go out with a bang! They spent all their money, sold the flat, ran up huge credit card debts, bought everything, went out every night – ‘dance to their death’, that was their plan.”

There’s a big focus on music on the play. “It’s a history of music from 1980 to 1989, focusing on Soho which was – and still is – a cultural melting pot, but especially so in the 1980s. This kind of countercultural, seedy underground Mecca for queers. It isn’t a one person show, it’s a two person show because without John Elliot it would be less than half the show it is. I asked him if he would put some ’80s music together for this story; the whole thing evolved into this winding musical spoken word odyssey.”

Music is still so important to the bars of Old Compton Street and the surrounding areas today. “Walking through Soho, a lot of the action takes place in the different bars and clubs of Soho and it’s such a good way to give each of those an identity, and give the audience a sense of their atmosphere by them each having a musical tone and setting. The story goes from 1980 to 1989 and there’s a huge evolution of music in that time because it’s the real rise of electronic music. That led to some awful mass-produced pop! But it also led to some interesting alternative music which often came from queer, black, under-represented communities, like Chicago or Detroit house, or some of the electronic music coming out of Berlin, and even from East London at the time.”

Jack wrote Cruise during lockdown – we were keen to hear about how the story came together and explore his writing process a bit more. “I heard this story in my early 20s and just held on to it for years and in the first lockdown I was like – yeah, better sit down and actually do this! That phone call was only very short, it makes up the core of the story but I’ve changed the details enough so the person who rung wouldn’t identify themselves in the story; I added lots, embellished lots, and I did a lot of research.”

As someone who grew up in the 1990s, we were intrigued to find out how Jack developed such a rich and detailed knowledge of 1980s gay London. “The turnover of bars and clubs is so fast in Soho, especially recently, but there are some odd corners of the internet where you can find people reminiscing about a bar or club, which is really great. I spoke to a few older gay friends who were going out in Soho in the ’80s or were in the vicinity. They weren’t scene kids, but that’s almost better – they just have very particular memories about certain places, the dive bars, or which places have no atmosphere, it’s such useful texture.”

Given the influence that music has on Jack’s work, we wanted to find out a bit more about the songs he likes. “I think the best music is the kind of music that you can dance to and cry to. A perfect example of that in recent times is Robyn’s ‘Dancing On My Own’ – it’s just heartbreaking, but also life affirming. That’s what the show is – a whole dance song where you feel the heartache in it. Or Womack & Womack’s ‘Teardrops’ – teardrops on the dance floor, it’s such a good song because it’s about someone crying but dancing in spite of it. While an audience will be taken somewhere that’s very moving and very educational, they’ll also leave dancing into the night.”

How does the Soho of today differ from the one we see presented in Cruise? “The most perfect example is that shop fronts in Soho now are all glass, it’s all so glossy, everything’s on show. Back then, it was all tiny windows, usually blacked out, doors with little hatches and you used to have to knock to get let in. It had a much more seedy, naughty, riskier, dangerous vibe to it, which I guess is partly to do with the general attitude towards sexual non-conformity or gender non-conformity at the time. It gives such a different atmosphere to a place – hard to imagine given what Soho is like now, especially around Pride when it’s so jubilant.” 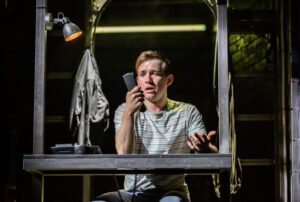 Tell us a bit more about that Switchboard conversation? “I talk about a younger version of me who received this call from an older gay man – initially we’re at odds with each other because we weren’t speaking the same language. One of the great benefits I got from Switchboard was meeting queer people of different ages and from different walks of life. If we want inter-generational queer relationships, we have to work at it as queer people, as we obviously don’t have that family line. I think it’s so important to keep those stories alive, because historically it’s been an oral history that has not been well documented. That’s changed for the better in recent times, but it’s so important to have inter-generational queer relationships.”

Are there any changes this time around? What’s new for Cruise for 2022? “There were a few references to the pandemic that we were just coming out of, so those bits were very current, I have reworked a few bits of it. Also, it’s always a dream as an actor to come away from something and then come back to it with a new perspective, because you always leave an acting job going ‘oh I wish I’d done this’ – and now I can do that! It’s going to be pretty much the same, but with a few more bells and whistles.”

Since live theatre returned after lockdown, it’s been a real privilege seeing so many LGBTQ+ shows – we wondered whether Jack had managed to see any? “I went to see The Normal Heart at the National Theatre and I loved that, in particular I thought that Danny Lee Wynter was… well, he got nominated for an Olivier! There’s quite a lot of plays on the AIDS crisis from an American point of view and actually not many from the British point of view, I guess that’s where Cruise slightly sets itself apart. But I thought The Normal Heart was fantastic.”

Jack makes a valid point – many high-profile queer plays in London in recent years, like The Normal Heart or The Inheritance, focus on the crisis from a New York perspective. “I certainly know about that period of history more from an American lens than from a British lens, so it was very interesting in researching the period and speaking to people at the time. I present the play as a journey back in time to the 1980s – as if that’s ages ago! As a kid when I was growing up in the ’90s, it was a handful of years ago, and the AIDS crisis was still raging, and of course that played into how my parents viewed a gay life. They thought, ‘well, that’s a life of danger and poor health’, so of course they were very scared about what kind of life I would lead. It’s very recent history.”

It is still relatively recent, yet there’s been a lot of progress since then – we now have all the tools we need to prevent new cases of HIV here in the UK. “I had a rage the other day because it was the 40th anniversary of Terrence Higgins’ death and I thought – this is crazy. It’s absolutely ludicrous that HIV is still endemic in this country. It’s one thing to let Covid-19 reach an endemic level when, by and large, you get it and then you lose it after a few weeks. But HIV is a lifelong condition when you get it – obviously it’s liveable now, it’s a chronic condition which you live with, but it’s crazy. I can’t help but think it’s because it only affects marginalised groups, or disproportionately affects marginalised groups. I had a moment of rage about that.”

Just before Cruise originally debuted in 2021, It’s A Sin hit our TV screens and brought the story to a huge audience. “It’s so great that came out and was such a big hit. It really told the story of that crucial time in gay history in particular, but queer history in general. I’ve always struggled with – should we just keep telling the story of this time? There’s always a desire as a queer story maker to tell stories of positivity and hope, and looking to the future. While Cruise deals with an awful time in queer history, and a very important time, it’s hugely uplifting as well. In looking back, it provides hope, and it’s a story about resilience and community.”

It’s been inpirising speaking with Jack on a range of pretty serious issues – we thought we’d end on a slightly more lighthearted note: how great the theatre is on a summer’s day. “If it’s hot in August, the Apollo Theatre has extremely good air conditioning. People hate booking theatre when it’s hot and I’m like – no, you should rush to the theatre for the air con!”

Cruise plays at the Apollo Theatre 13 August to 4 September. More information can be found here.