The View UpStairs writer: ‘Straight critics with a stick up their ass don’t get it’ 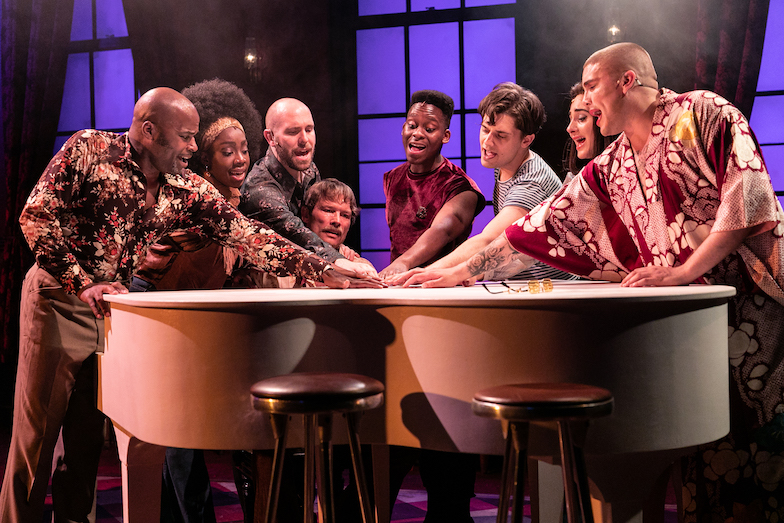 For Max Vernon, ‘polarising’ is not a dirty word. In fact, he’s kind of happy that the European premiere of his musical The View UpStairs has divided the critics as much as it’s been delighting and igniting audiences.

“And I’m kind of blown away by it,” he says of the Jonathan O’Boyle-directed production currently playing at the Soho Theatre. “I think it is equal to the New York production or even better.”

The LA-born/NYC-based Vernon first put on the show – inspired by the 1973 arson attack on New Orleans gay bar The UpStairs Lounge in which 32 people died – as a 2013 concert. Four years later, it was fully-staged Off-Broadway and has been performed at numerous regional theatres around the States before reaching London.

We caught up with its composer-lyricist-writer to talk about the story’s place in queer history, making a “cunty” character the show’s protagonist, and how there needs to be more diversity in queer theatre. How do you feel the show has gone down in London so far?
Having seen the reviews, it’s totally polarised people the way I thought it would. When I walk down the street I myself polarise people. Some look at me, they snap and go ‘Yes, honey!’ and others grimace. I think that’s true of the work too. We’ve had standing ovations at every performance. We’re flooded with tweets from people saying they’ve never seen a piece of theatre like this, they feel seen by the show, they were moved, they were crying, they were laughing, whatever. Then you have some older, straight critics with a stick up their ass who don’t get it.

When did you first learn about the 1973 arson attack on the UpStairs Lounge?
Growing up, I was bullied for my identity, I didn’t have any mentors and I didn’t feel I had any connection to my history so I thought ‘If I’m going to bullied for this identity I should learn a bit about it’. I did queer studies as an undergraduate and in a random chatroom someone wrote ‘Next month is the 30th anniversary of the UpStairs lounge fire where 32 people died’. I was totally shocked by that because I thought I knew everything about queer history and I’d never heard of it. I sort of flagged it in the back of my mind, thinking ‘One day I want to shed some light on this event in some way’. Growing up, I loved musical theatre and I was attracted to the weird cult hits like Hedwig and Rocky Horror so I thought ‘I’m going to write a queer rock cult musical that uses this fire to have an inter-generational conversation about the ways in which we have made progress but not enough progress’. [Laughs] I also wanted to use it as an excuse to have a fashion show. What was the inspiration for having the character of Wes – a present-day twenty-something fashion designer and influencer – go back in time to the venue just before the fire happened?
It comes from a place of wanting to be authentic. I was not alive in 1973 and I didn’t just want to put words in the characters’ mouths, I wanted to contextualise it from a millennial perspective showing what someone from today might experience in the early 70s and things they’d take for granted. Wes is a bit like Ebenezer Scrooge if Ebenezer Scrooge were a cunty millennial fashionista. A lot of people have trouble liking him but you’re not supposed to like him. He represents the world we’re living in right now and I don’t know about you, but I don’t like the world we’re living in right now. He needs to be this complicated protagonist because that frames the past and we understand what’s been lost. He’s a flawed person but then this current world is flawed and he’s going to learn from the past. What was your research process?
I went to the library and did a bit of microfiche-ing, looking up stuff in newspaper archives. But there wasn’t a ton to be had because it was kind of in and out of the papers and that’s what the show gets into – the fact this attack happened and no-one really cared. Politicians and religious figures didn’t speak out about it, no-one was ever arrested or persecuted for the crime, so there was a dearth of information. But I took what I could find from researching people who were actually at the bar and my undergrad degree came in very handy because I’d done a ton of research and essays into the pre-AIDS community in the 70s in particular. That was also partly the reason I wanted to write this show because there’s a certain generation of queer theatregoers where all of our stories have to be centred around the AIDS epidemic. I understand that, because it’s an impossible trauma to ever really grasp, but I feel there’s such an enormous body of work about it that I’m more interested now in creating queer theatre, and theatre in general, that’s about pre- and post-AIDS. Do you feel how the 2016 Orlando nightclub shooting was addressed and reported represented progress?
Certainly it was progress in that there was visibility and people were able to publicly say ‘I think this is awful’ whereas before there was silence. But what my show gets into is the fact you take two steps forward and one step back. There’s never as much progress as you want because people are always fighting against it. Unlike then, when politicians were completely silent, we have politicians now who are more than happy to do a photoshoot at a gay Pride parade but what are they actually getting legislated in congress to make things better? It’s a bit insincere to me. And yes, there’s tangible progress but now we’re also seeing a tangible backlash where, you know, protections are being stripped away from LGBT+ students in schools and transgender people are banned from bathrooms in the military. Do you think there are enough queer stories being told on stage?
I think there’s a fair amount of queer stories but I don’t think there’s diversity within that. I feel theatres are interested in programming gay and queer stories – or actually more typically gay stories, not queer stories because I think there’s a distinction between those – but they often focus on wealthy, white, property-owning gay people who are more acceptable and less often on the fringes of the gay community. This show is an exciting opportunity to depict different aspects of that community who are maybe not represented on stage, certainly not in musicals. I want to see more stories about queer people of colour, I want to see more stories about the trans community and, more importantly, when those stories do surface I want to see them being written by the people who are actually from that community.

The View UpStairs is at the Soho Theatre until August 24th.