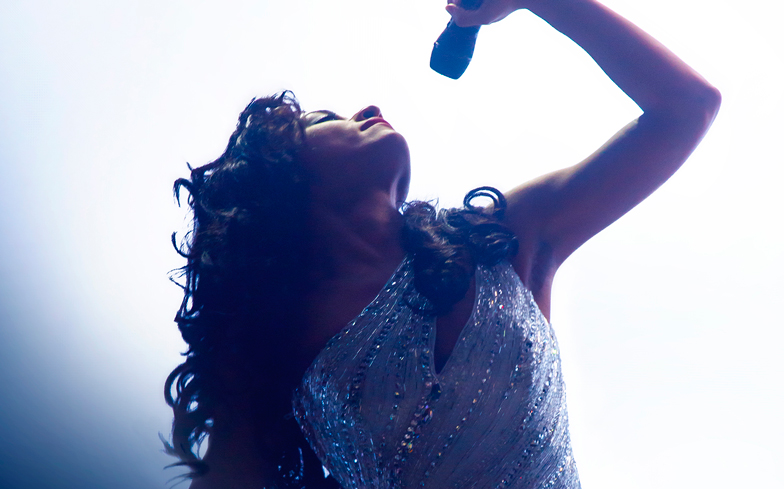 …and why she isn’t here for any of your toxic labels.

The question of whether Black History Month has a special resonance for the LGBTQ community brings a resounding: “Of course. Let’s be real, when was the last time you read about a queer black woman in the history books or a gay black man?” Speaking in more general terms, the actress – who was in the original Hamilton ensemble – adds: “It’s very rarely mentioned that Alexander Hamilton had sex with men. In my opinion the LGBTQ community is thriving and in order to celebrate us why wouldn’t we want to celebrate the stories that have come before us? It’s a very tragic story but the fact we’re able to talk about Whitney Houston and acknowledge she loved a woman – that’s amazing.”

27-year-old Ariana happily came out publicly a few years ago and, speaking down the phone from her Manhattan home, declares: “I feel I have absolutely nothing to hide about who I’m with and who I love. But being a black queer woman can be complicated. In fact, I walked down the street earlier today holding someone’s hand and this older African-American gentleman looked at us and was like ‘You gay bitches, go to hell’. It’s fascinating to me that that’s what you still get from a certain faction. I live in New York City, which is meant to be one of the most accepting cities in the world, yet things like that still happen.”

How did she react? “You have a choice; today I chose to ignore it, tomorrow perhaps I will choose to have something to say about it. But the only way I can lead is by example. I choose to be open and I don’t accept anyone else’s truth about me. That’s his view and it has nothing to do with me.”

Having trained as a dancer in her home state of North Carolina and competed on So You Think You Can Dance? before breaking into musical theatre, Ariana feels the arts are a haven for the queer community. “I’ve always felt really safe to be myself,” she says, “so when I started dating women publicly, it wasn’t a thing. Coming out to me wasn’t a big deal. I was just living my life and living my truth. Because of the nature of our work in the arts, we are very loving and very accepting and that’s why I often say ‘If you want real change you should start with the arts’ because that sort of hate doesn’t breathe within our community.”

If Ariana doesn’t label herself as gay it’s because she doesn’t like labels in general. “I work in a business that constantly tries to put me in a box, like ‘You’re just a dancer’ or ‘You’re just this or that’. Also, my mother is white, my father was Puerto Rican, so I don’t identify with any specific ethnicity either. When I walk down the street, I present as black and I do have African-American lineage, but I’m also part-Italian. “If I choose a term it’s ‘human’ because I believe humans should be allowed to love who they choose regardless of gender. For me, it’s about energy and conversation and that tangible but elusive thing of chemistry that you can’t quite put your finger on. It could be a man, it could be a woman, I’m just interested in knowing and loving a human.” Since coming out she’s been offered a few “queer-identifying roles” and has an interesting take on that. “I think it’s more about trying to find the person who is comfortable within that type of character. I will say, I’ve watched plenty of television series and plenty of movies where I’m watching a character who is supposed to present as gay and I don’t buy it for a minute. I’d rather put myself forward because I’m comfortable with women and comfortable with presenting that type of story and I know it’s gonna be honest rather than watch something inauthentic.”

In the Summer musical, Ariana is Disco Donna to Storm Lever’s Duckling Donna and LaChanze’s Diva Donna. Signing on for the show about the Queen Of Disco, she didn’t know much about Donna’s backstory – which, the play reveals, included sexual abuse, drug addiction, even near-suicide. “I only knew her name and her voice so I was intrigued. I also found I could identify with her. The impression I got is that she often felt underestimated and I’ve felt that in certain phases of my career. It’s important that in 2018 we pay attention to stories like Donna’s and that we don’t backtrack. She came up at a time when you didn’t speak up for yourself and you literally did what you were told, but she fought for what she wanted.”

Then there’s the fact Donna was a role model for women of colour. “She was a female artist of colour who appeared to be sexually free,” Ariana says of a woman who recorded Love To Love You Baby as if she was having a 17-minute orgasm. “ She wasn’t like Diana Ross and the Supremes. She was her own thing. She did things no other woman had done before her.”

LGBTQ fans flock to the show and the stage door, suggesting that all is forgiven when it comes to Donna’s alleged homophobia. As addressed in the show, the born-again-Christian apparently made an odious remark about ‘Adam and Eve, not Adam and Steve’.

“And that’s something I wrestled with, whether we should include it or not,” Ariana admits, “because although she wrote a letter to ACT UP afterwards, she didn’t actually apologise. She quotes scripture and says ‘I love you, Donna’ but that’s not really an apology.

“But through talking to her family I learned that as her life was coming to a close, she saw things a bit clearer. My conclusion is that while she was an icon she was also a human and we all make mistakes. Part of telling her story is admitting she was human and you can love someone and not always like the things they do. That’s where I landed with that.”

More information on Summer: The Donna Summer musical can be found here.