The cast of Netflix’s Heartstopper covers GAY TIMES: ‘It shows the beauty of queer love’ 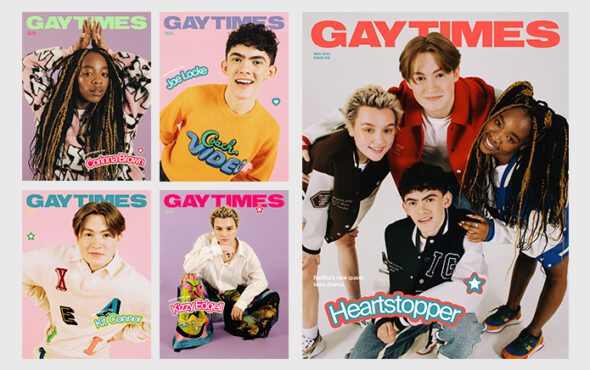 All four stars can be seen in Netflix’s highly-anticipated queer teen romance, Heartstopper, based on Alice Oseman’s championed webcomic and graphic novel of the same name.

Following the love story between the openly gay overthinker Charlie Spring (Joe) and buoyant rugby player Nick Nelson (Connor), the series is a light and joyous watch featuring little in the way of trauma and conflict, and that’s exactly what young queer people coming to terms with their sexuality or gender identity need to see.

Joe, who makes his acting debut with the series, praises Heartstopper’s relentless optimism and enchanting depiction of the queer experience.

“The elements of bullying and of sexual assault are in [Heartstopper], but it’s a miniscule part of a really happy story, which I think is really important to show younger, especially queer kids, that your life isn’t going to be just bullying,” he tells GAY TIMES. Kit agrees, saying it “shows the beauty” of queer love. Heartstopper also puts queer female love on display with Corinna and Kizzy’s characters, Tara Jones and Darcy Olsen – Higgs’ resident lesbian couple. The former says the show is “long overdue” and will be “relevant for all audiences – “no matter how old you are – young, old, queer, not queer. It’s for everyone.”

“I think it’s a good way to introduce kids to the concept of being queer,” adds Kizzy. “It’s not like there’s a video that you can put on and show kids to teach them how to be towards queer people, or if they are queer, to figure it out. There’s not many kid-friendly ways to do that so I think it’s helpful.” The issue also features Alice, who served as lead writer and executive producer. For them, it’s important for the series to “spread joy” and “be this show that young LGBTQ+ people can watch when they just want to feel happy and seen.”

Heartstopper has always been a personal project for Alice, they admit, and they’ve always had “complete control” over the universe – which is why Netflix’s enthusiasm for the author to be heavily involved in the making of the series felt like “the perfect fit” for her and fellow producer Patrick Walters. “We care so much about the story and the characters and Netflix could see that, and they were happy for us to hold onto that and not take away what we were doing,” explains Alice. “I think the fear for me, and SeeSaw, was that control over the creative would be taken away. But Netflix has been so supportive and let us do what we want with it. I still can’t believe how positive a TV experience has been for me!”

You can read our full interview with the cast of Heartstopper and Alice Oseman from 15 April via the GAY TIMES app, Apple News+, Readly, and Flipster.