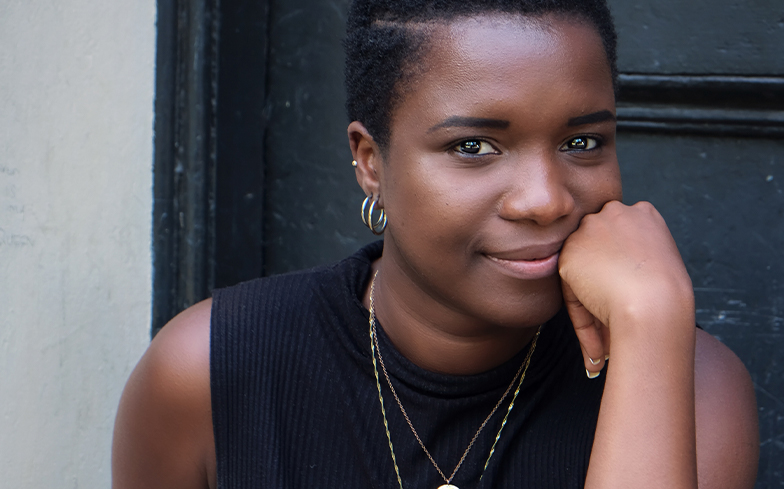 “I wanted to start writing plays because of a desire for autonomy, to have more control”, says Temi Wilkey, with the infectious warm energy so distinct to her aura, yet the confidence and surety that I have always seen in her.

Having been in her orbit throughout the many facets of Temi’s creative practice, hearing this makes perfect sense to me. Although we are sitting here, in Soho Theatre bar – having a far-too-early prosecco to celebrate her Debut Play, The High Table, opening at The Bush Theatre in two weeks – I first met Temi as an actor where we played on-stage Best Friends Amyl and Mad in Jubilee, at the Royal Exchange and Lyric Hammersmith. This desire for autonomy and control that Wilkey mentions she gets from writing is something I had seen before in the room of Jubilee. I remember a particular moment in the show, Wilkey had decided to help write a text for her character that tackled colonialism, empire and slavery, and with that moment: writing part of herself into the work. It was not an option for Temi to not write herself in, it was integral to the truth of her role. It seems to me that the determination for authentic stories fuels much of Wilkey’s work.  “Let me for once tell my story” is a quote from Michaela Cole that Wilkey tells me is up on her wall, “it’s that hunger to just finally tell it that’s driven me to write”. Although Temi says it feels like a quick momentum to be landing at her debut opening this February, it is clear that through not only mentors such as Tom Wright, Rikki Beadle Blair, the Royal Court Young Writers Group, coupled with this burning need to tell her story, that The High Table has was always going to come into existence.

Yet none of this sounds like just any story. The High Table is described as an epic. A Black and queer and distinctively Nigerian drama, where we met Tara planning the perfect wedding for her girlfriend Leah, derailed when her parents refuse to attend. “I didn’t write this play thinking it would be put on a stage right now”, this surprises me a bit, so I give Temi that look as if to say – explain yourself babe – “it’s big in scale, there are 8 different characters and for my first play, that’s a lot”. This made me think about the stories we are used to seeing on main stages, and the work we almost always assume will stay in a basement at best, and our imaginations more often. “When you’re a Black queer writer your debut is usually restricted”, says Wilkey, and I cannot help but agree. Although I think we have seen huge strides in both Black and Queer theatre in recent years, with 2019 giving us the outstanding debut of Jasmine Lee Jones’ ‘Seven Methods…” at Royal Court or Yasmin Joseph’s ‘J’Ouvert’, it is true that still it feels rare for both Black and queer work to be given the scale to be able to take risk. When I ask Temi about this risk, she replies in a way so typical to the artist’s willpower, “I just needed to get this play out of me” she says, “I wanted something distinctively Nigerian and Queer. To show two Black women in love”. We both smile at the thought of this. A smile that knows what reflections of yourself on stages can do. As if recognising in the smile how few examples we could recount of this on stage.

It brings up an important distinction that I feel is often not made in large sweeping statements about queer work, even queer Black work, that often removes the specifics that location or the gender of the love may bring. Blackness and queerness are not hegemonic, and it feels like the particularity of a Queer Nigerian story is one Wilkey wanted to wrestle with. “For a long time, I had a strange relationship with my heritage. I love the generosity and the humour of Nigerians, but the homophobia and highly religious elements never mixed with me”. This feels like a narrative we have maybe seen from white and straight people when writing about different countries in Africa. Cue a religious leader, a caricature, and a homophobic relationship. But the richness and depth that we gain when someone writes from the perspective of nuance, connection and experience paints a far more complicated picture of that same homophobia. “This homophobia is a colonial import and realising that helped me to embrace more of who I am and to think of the country’s possibility that could have existed without colonialism.” It’s that ability for Black queerness to imagine other futures or push our representations to somewhere deeper that feels exciting about Temi Wilkey’s work. “A lot of the show is set on the North Star,” she says, “everyone is real in the show, the stories are real, but pre-colonial African spirituality, our ancestral worship and fantasy play a huge part in its inspiration”. It excites me that it feels like The High Table will continue in a lineage of Black queer work and history that blurs the binaries of what love can be, but also what reality has to be, where Black queer futurism is used to imagine worlds and lands beyond the racist and queerphobic ones we inhabit. Before I get lost in the specifics of the work, Temi quickly reminds me that at the centre of this show, she hopes is something we can all connect to. “At the heart of this show is family, love and the tension between the two. People can expect to laugh, maybe cry, and feel”, reminding me that among our specifics is a universality. Despite this, I could not help but want to enquire about so many aspects of what sounds like such a rich piece of work –  from the live musician on stage to the ancestors’ role in reality, or really just the damn North Star! But as ever with Temi, she was far too on the ball to give me any spoilers. “You just need to come to see it”, she says as we clink our glasses again.

And I’m glad, because from listening to Temi talk about the show it is clear that The High Table is something that needs to be seen. As the arts continue to play catch up on the different kinds of stories that deserve to be given stages, I cannot help but think of Temi’s parting words to me about the show. “I think I have written this as a tonic. A tonic for queer people, for queer Black people, for Queer African people. There are few spaces you can be your full self, but Black queer love is a place I could exist in all the musical notes of my humanity, I wanted to write that into existence”.

We have one last cheers of our too-early-to-drink Prosecco. In the cheesy way that friends celebrate when something feels like an achievement. It may feel weird to celebrate something before it has even started, but in my mind, when so much of Black queer love is hidden, Temi Wilkey’s debut The High Table putting that same hidden love front and centre –  before it has even opened, I might add – deserves the raised glass, and more than that: it is demanding us to witness it flourish.