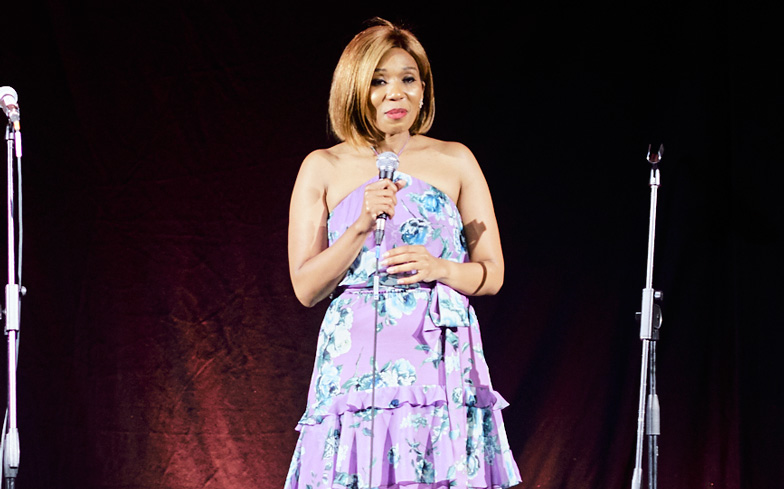 Having spent many of her years watching Nelson Mandela make history and define what we see as a true political and social leader, it’s clear that Swati Mandela has learnt a great deal from her grandfather. Even after his death, one thing in particular remains with her; his passion to get the job done and support the underdog.

In a UK exclusive interview, Swati Mandela speaks to Gay Times about the continuing fight against HIV/AIDS, the importance of open conversations around sexual health within the BAME community, and how political figureheads around the globe – and one in particular – could learn from the strength and kindness shown by her legendary grandfather.

How do you think the attitudes towards sexual health for the BAME community has changed over time?
In my country, the impact of HIV and AIDS and what is meant for us as a society has changed over the years. My grandfather was very vocal about the fact we as a family were impacted by HIV. My uncle died of AIDS and I think it was a courageous step for him to take and disclose to the public that we as family – that is quite prominent – are dealing with something that so many others deal with, and to try and remove the shame. To say that it’s important for people to take their sexual health seriously.

For a very long time, the narrative around HIV/ AIDS was something that many people didn’t want to talk about. I think that he was able to shed a spotlight on it and say that it’s important we as politicians and people lend a name and voice to it because hopefully the impact will allow people to feel comfortable enough to come out and disclose their status. Do you think from Nelson Mandela’s generation through to yours, attitudes towards those disclosing their status has changed? Is the shame you mentioned going?
I think my grandfather was one of the most courageous ones of that generation. I haven’t seen others in his generation take the same sort of footsteps, but I do think the younger generation own the fact their voice is critical and can make a difference and impact the movement. I think that there can always be more done; it’s not enough, and particularly in the minority groups like you find here in the UK – and why NAZ and the work they’re doing is so critical – is because there’s this stigma about HIV. The fact people don’t take ownership and responsibility of their health for many reasons. It’s cultural, it’s social, and people have the fear of finding out that if they’re sick, what does that mean for them? Also, people don’t understand that it’s important to educate yourself. I believe that you’d rather actually just know and go and find out. The earlier you find out… people wait so long and that has ripple effects. I do hope that if I’m here now and speaking out against it, and saying I care and it matters to me, that people will see that it’s something that they too should take on to say that they should be responsible for their own health.

Is it also about creating a conversation to inform people that there will always be others who are similar to yourself, and opening up to amazing organisations that can give you support?
I do think it starts at home. When I was growing up, my mum would do the most amazing things like buying my siblings and I books and play videos about sex. She didn’t feel comfortable to talk to us, so she’d pop the video in or say ‘read this’. Then she would say that if we had questions to go and ask and she will answer. I think it has to start at home and the environment to allow children and people to be comfortable to be themselves and talk about sex. We’re all shy about it so I’m grateful my mum took that step, as opposed to never talking about it. I know certainly in black communities, we don’t talk about it. We all do it but nobody discusses it, and I think the conversation needs to be had, but responsibly.

Do you understand why some queer people of colour might be apprehensive about declaring their status due to discrimination from within their own community?
At home, there are so many openly gay people – I see them everywhere all the time. Celebrating, being themselves and living their lives fabulous. I must say that I commend whatever we’ve done at home in terms of allowing that community to feel free enough to live and to just be. I think a lot of stuff is political, social and cultural. Culture plays a huge part in a person feeling comfortable enough to say ‘This is who I am’. To think that, in this day and age, people can be naked on TV but you can’t come out’. What a disparity in terms of what society accepts and what it doesn’t. What do you think politicians across the globe can do to make all the above easier?
It’s giving people equal rights to get married – same-sex people the right to marry in whatever country they want to get married in. If governments take those kind of steps, and create communities and spaces that people can go and live and have access to health care and not feel like they’ll be turned away because of their sexual orientation. For me, everything is a society thing, and we all have to get behind it. Religion is a major part in this space and narrative, and it’s a sensitive for many people. It’s used to perpetuate a particular narrative, so if humanity can look at each other as human beings, allowing people to express themselves in whatever way and not as the benefit or disadvantage of anybody else.

And your grandfather’s great support of all people must be something you’re proud of looking back now?
My grandfather stood for humanity and the dignity of all humans. If we could have that type of quality and character in our leaders today, I think we would be looking at a vastly different world at many levels and on many issues. All the stuff we see with fascism, racism, sexism, violence against women and children. I think that he was a pioneer and broken the mould because people didn’t expect it coming from him, but my grandfather was just about treating each other with respect and let’s see each other as equal. You’re not better than me because of the colour of your skin; you’re male and I’m female; you’re female and I’m transgender. That as humans, we’re equal and all the same. Hearing the remarks President Trump has made against the queer community, the world and women, does that worry you the rhetoric he’s pushing?
How can you not be worried because it’s counterproductive to all that we as the women’s movement and women’s rights have achieved. And also, like, race issues. That kind of rhetoric takes you back, and then you’re fighting so hard to move things along and improve something but get stuck in this bottleneck of just trying to debate something that’s so negative and destructive to society. I think that it’s very dangerous and very concerning. You see these outbursts of violence everywhere and these shootings, and I’m not saying anyone is responsible, but the rhetoric doesn’t help. It’s not positive to race relations. It’s not positive to the women’s movement.

When we look at the midterms elections and what’s just happened, we must also celebrate small feats. First Muslim woman, first lesbian… I don’t know how many women were elected but it’s quite significant. It’s record-breaking. That’s something to celebrate, too. There are people taking a stand against it and saying that ‘I don’t stand for this’ and ‘I’m going to use my vote effectively so that I can make sure I’m part of the change and seeing something change’.

We can dwell on the bad, but also let’s focus on the positive as there’s amazing things we’re seeing happen in history with women and race. Let’s celebrate that!

Related: A letter from Lady Phyll: ‘No amount of bullying, racism, sexism or misogyny will hold us back’

Change is coming and it’s happening now.
We’re seeing it! We are participating and you have to participate, too. I don’t believe in expecting things to change without doing something. I think participation is what we saw in the elections in the US.

And now, more than ever, the power of the lone voice.
People said that ‘My vote doesn’t count’. No, that isn’t true. Your vote does count and you can fundamentally change the course of something. We saw that and I was very excited when I saw the results of how the election went. So many women and women of colour and women wearing the hijab. That’s incredible!

More information on NAZ can be found here.