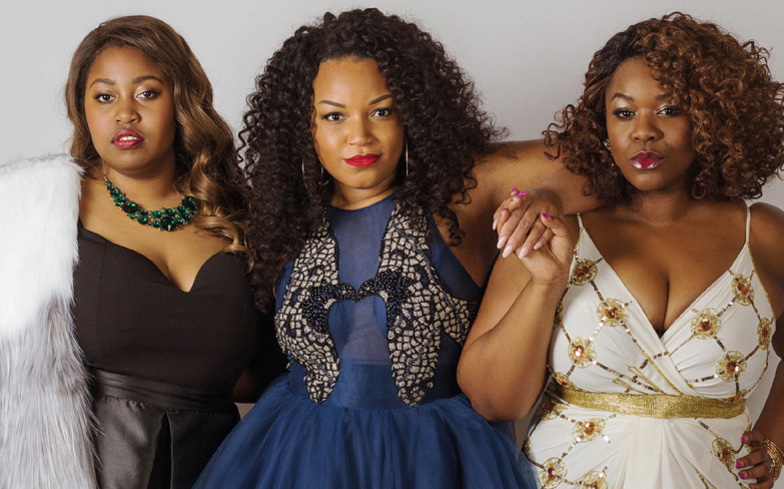 From Holliday to Hudson, Dreamgirls has been a fundamental staple for the queer community in finding its voice by empowering the uprising of the underdog, and taking pride in whoever and whatever you are – regardless of the consequences.

Having finally made its way across the pond with its debut West End production back in 2016, its opening invites a new generation to rise up and bask in the beauty of black female empowerment played out with strength, sequins, and fine song.

“Effie, as a character, is an underdog. She’s bigger than the other girls, she has an attitude, and things naturally don’t go her way – she has to fight for it all,” explains actor Karen Mav on playing the beloved role of Effie White. “This show is vital because, if you look at it, there’s no other show in the West End where the lead is female, black at the same time, and of my casting bracket. It’s amazing just how representative it is.” It’s a sentiment that her co-star Moya Angela, who also shares the role of Effie alongside Karen and Marisha Wallace, agrees in full.

“Anytime it’s a rags to riches type of story, it lets you know there’s hope for you,” she beams, “so when you get on stage and have your own story to go along with the story of the piece, it does something every single time when I’m looking out and singing.” She pauses: “I’m remembering my story based on the Dreamgirls one and how wonderful they connect.”

Related: Wanda Sykes has spoken to Jane Fonda about Monster-in-Law 2

And Dreamgirls has, and will continue, to play a large part in ensuring the positive representation of women of colour in winning, not victimised, roles within a mainstream forum.

“I do feel like a lot of the time you see black women in roles where they’re beatdown. You don’t get to see them be glamorous,” Marisha notes of breaking down unwanted stereotypes as as member of The Dreams. “Sure, these characters have their downtime in the show but they come out of it stronger, and you even get to see them looking beautiful in Swarovski crystals.”

Smiling, she continues: “We, as black women, have a voice and special stories to share. Our viewpoint and our perspective is often something people haven’t seen, and people are interested in us telling these stories.“ A piece of art that’s shaken an awakening in many, its newest three stars thunder through this show full of musical classics, including numbers we’ve all caught ourselves serving in the mirror in true Drag Race fashion. But it isn’t a mirror these ladies face nightly, but packed audiences at the iconic Savoy Theatre. And while the show doesn’t directly feature an openly LGBTQ character, its piercing message of self-empowerment and self love is one that’s made legends of these characters and the ladies that come to play them. That is alongside serving face and body for days, hunty.

“One of my favourite things are drag queens,” screams Moya through great laughter. “While I’m not saying we’re drag queens on stage, I don’t know very many big, beautiful black women who get the chance to dress like this. That’s my moment and I’m happy to be in my own form of drag. When am I really able to walk around in costumes this gorgeous?”

Related: What’s it like being a young queer black man in 2018? Matthew Pipes explores

With Karen recalling conversations between herself and young LGBTQ fans of the show – them empowered by her displaying her truth – it’s clear that the connection between our community and Effie White remains as tight as it was originally, way back in December 1981.

“Dreamgirls is an iconic show for the gay community. It’s embedded in the culture of the LGBTQ community,” smiles Marisha. “It’s about an underdog, and being in the community, you are a kind of underdog and you get to come out and be who you want to be no matter what anybody tells you. ‘And I am telling you that I’m not going.’ I’m going to be here and I’m going to thrive. You’re going to see me.” But what makes this show quite so special to its three stars? Moya, Karen and Marisha open the library on life in the spotlight and reveal what makes Dreamgirls a barn-thumping five-star smash. Karen: In this era, women were classy in the way they dress and with their makeup. It feels glamorous, and the hair and makeup has been the highlight for me. We have so many changes and even in the end I get to rock a full afro. The different levels of a woman of colour in terms of hair she’d wear during the time have been explored by the creatives here, and that has to be my favourite part, easily.

Marisha: What do I need to say? It’s iconic and classic and timeless and it still lives today. We will sing these songs forever!

Moya: I’ve been in Dreamgirls now a few times, but this is the most glamorous version. You literally transform when you put on those clothes and you can’t help but be in the time of when the clothing speaks. It’s fun and awesome to watch you all watch – especially with my I Am Changing costume because people are confused by how the whole thing happens, and sometimes even I’m confused.

Karen: Other than the voice, the orchestra. If you listen to the musicality of the instruments, it’s absolutely beautiful and I do wish there was an instrumental album as there’s no music like it – ever.

Marisha: It’s women taking control of their lives and coming together as a sisterhood to overcome the patriarchy almost. We have this guy who is telling us what to do, and then we come together and we decide what we want to do with our own lives.

Moya: I love being able to showcase my voice. This is a hard piece to sing, if not one of the hardest roles that’s on the West End. When you’ve sung through that whole thing, I genuinely feel energised which is really ridiculous if you think about all we’re going through. When people love what you’re giving to them and being able to tell the story, it’s something that I… like what other role is going to give me this?

Karen: Sometimes it feels like you’re fighting alone and when they start cheering you on, it gives that push to get to the end of the song (And I Am Telling You I’m Not Going). It’s a marathon that song that you can never half-sing any of it. Depending on what day you’ve had, sometimes you have to dig deeper, but the audience helps in a way that I can’t describe. Moya: Every time I’ve been in this particular show, it creates a complete family when it comes to the entire cast. As I mentioned, I’ve been doing the show now since 2009, and every company I have best friends from that I’m speaking to and patting them on the back for their accomplishments. It does bring a family together and you’re able to love each other off stage as well as on… and we definitely do.

Related: Is Everybody’s Talking About Jamie the most important LGBTQ musical of the decade?

Marisha: I feel like I’ve created a sisterhood with these girls and this show. We’re doing something special and to remember for the rest of our lives. We’re a part of this show and we hope that, with time, that it opens the door for other powerful women to come in and continue and make Dreamgirls have the legacy that it should and will have.

More information on Dreamgirls can be found here.