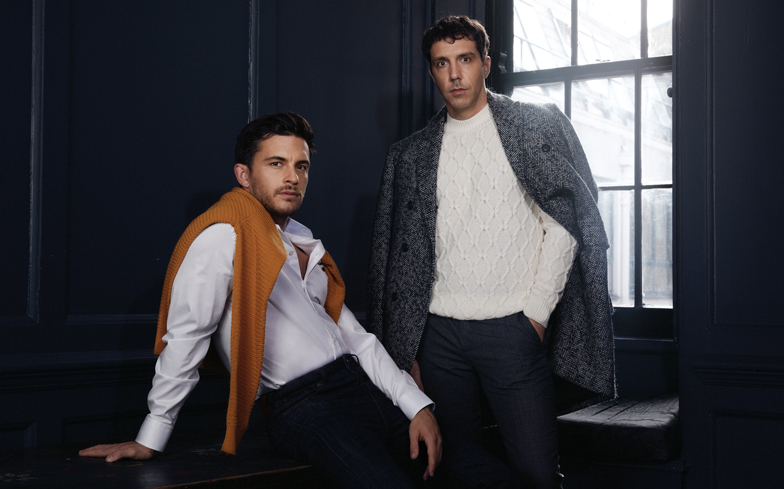 “It’s about young people looking up to gay role models and seeing them not being marginalised.”

When it comes to queer roles for queer actors, Jonathan Bailey has strong views that he’s not shy about expressing. It’d be fine, he reasons, if it was a level playing field where everyone got to play everything across all levels of the arts.

“But do I think Disney missed an opportunity with casting Jack Whitehall in Jungle Cruise?” he ponders about the studio’s controversial decision to cast the straight comedian as its first major gay character. “Yes, I do, because the statement of inclusivity of casting a gay actor instead, especially with the family audience that Disney has, would have been huge.”

Jonathan recently played a gay assistant director in the Donmar Warehouse revival of Peter Gill’s The York Realist and is a gay husband-to-be in a new production of Stephen Sondheim’s Company (which is now playing at London’s Gielgud Theatre), but he’s also played straight roles and says: “Of course actors should be able to play absolutely anything and straight people should be able to play gay but there’s definitely a culture, at a certain level in Hollywood for example, where gay actors don’t
get to play the straight roles.”

Related: Is Everybody’s Talking About Jamie the most important LGBTQ musical of the decade?

That’s why it feels unjust when gay roles in big Hollywood movies go to straight actors. “It’s a statement that has to be made and seen,” Jonathan forcefully states, “that we see gay men not just playing gay roles on TV but also in Hollywood and in big, award-winning roles.”

Choosing his words carefully, Jonathan’s Company co-star Alex Gaumond (the Canadian actor best known for West End shows like Legally Blonde and Matilda) adds: “I’m playing a gay role and I’m straight so I understand both points of view, but any group that has felt somewhat excluded over years and years should be able to get to a place in society where every role is fair game.”

“It’s about young people looking up to gay role models and seeing them not being marginalised,” Jonathan chimes in, “and it’s about seeing your lives being portrayed authentically by people who have experienced what you have experienced.”

Jonathan didn’t hesitate when he was asked if he’d like to play jittery bride-to-be Amy from the original Company (which was first staged on Broadway in 1970) reinvented as a guy named Jamie who is nervous about getting hitched to his boyfriend Paul (played by Gaumond). Amy didn’t feel valid in herself. “And that makes sense the more I think about gender politics and the role of the female in society in the late-60s/early-70s as one of subservience and being limited.” That’s something that resonates for 30-year-old Jonathan in 2018.

“Thank God we’re moving forward, although we haven’t got there yet, in terms of equality for women but with gay men it’s like we’re still seen as ‘He’s my gay uncle’ or ‘He’s my gay best friend’. We’re still sort of labelled and given specific roles.” Having Amy now be Jamie is doing its bit to redress that. It also makes perfect sense given the Company update is set in the present day, not its original 1970s past. “So there should be every type of coupling,” Jonathan says while Alex adds of the show’s gender-switched heroine Bobbie (Rosalie Craig): “There’s no reason why Bobbie would only have heterosexual couples as friends in 2018 New York. They could have made any of the couples same-sex but this is interesting because it’s about a gay wedding, which is very current, although the idea of getting stressed out on your wedding day is non-gender-specific. It applies to a woman or a man in a heterosexual marriage or a man or a woman in a gay marriage. It’s a very human, visceral reaction so why not look at it through a different lens? And if you’re going to do a revival there’s not much point in doing a carbon copy of what’s been done before. If you’re going to re-do a piece why not try a fresh approach?”

Jonathan insists that the switching of genders, with Bobby becoming Bobbie and Amy becoming Jamie, isn’t a gimmick and in fact the script hasn’t been amended beyond the changing of a few pronouns. “And with all art forms,” he says when Gay Times meets him and Alex during a break from bringing the show to life, “if something is robust in its brilliance and clarity it remains prudent and puts a mirror to society.”

The boy-boy couple are also presenting a positive spin on the story. “It’s not about the impossibilities of being gay or the struggles of being gay,” Jonathan points out. “There’s no part of this play where that’s a conversation and there are no outside opinions on their sexuality. That’s so brilliant and positive.”

The road to marriage is a rocky one for Jamie and Paul. “But just because we gay men can get married now that doesn’t mean it’s going to be easy for everyone. It’s the heteronormative idea versus queer culture and generationally over, like, five-year stints people have completely different experiences growing up gay. Paul is six years older than Jamie so there’s the entitlement of the younger generation versus older gay men, some of whom who want to ring-fence queer culture as something that’s vital in terms of gay identity. Without it being an analysis or an academic argument, emotionally it’s all there in the play.” During their lunch break the boys are wolfing down curry and clearly have a great rapport, although they play very different characters in the show. Paul is very together, very grounded, very happy in his own skin and in his relationship with Jamie, but Jamie is less sure of himself. “He’s probably never felt that he’s been affirmed ever in his life,” Jonathan reckons, “and what I’m working out as we rehearse is that he probably doesn’t ever feel he’s worth being loved for various reasons. There are lines in the play that suggest he’s come from a broken home and, as best friends with Bobbie, I feel he’s quite co-dependent and can’t establish boundaries and that’s why when it comes down to it he keeps trying to please everyone until he has a massive crisis.”

That crisis comes during the Getting Married Today number, which must be one of the most lyrically and rhythmically complex things Sondheim has ever written. Jonathan laughs when we wonder how the hell he manages to get his tongue around it. “It’s like learning the rap in Gangsta’s Paradise in the 90s. You learn it and once it’s in it’s in.”

As for what they have in common with their characters Alex, 40, has just gotten married himself and notes: “I tend to have been a bit of a rock for people so that is quite similar to how Paul is.”As for Jonathan, he smiles: “I don’t even need to rehearse; it’s all there. No, but I do feel Jamie’s bringing out a part of me that’s always been in there somewhere because I’m essentially someone who needs a rock – that and the idea of always trying to please people.” Bobbie is a 35-year-old serial dater who has yet to settle down. Making the lead into a woman was a lightbulb idea that came to director Marianne Elliott (who did a fantastic job with the recent revival of Angels In America), whom Alex quotes as saying: “The show was written in the 70s but if a man is 35 now, has three girlfriends and hasn’t settled down yet people kind of go ‘So what? That’s not very interesting’ whereas if a woman is 35, has three boyfriends and hasn’t settled down you have the body-clock-ticking thing of ‘If you’re going to have children you have to make that decision soon’.”

At the time of our chat Bailey and Gaumond hadn’t seen a full run-through of the show so they’re not sure if male Bobby’s hinting at dalliances with other guys in the original text is reframed as female Bobbie having done likewise with other girls. “But the idea of people experimenting with sexualities wouldn’t be as much of a story point now as it was in the 70s,” says Jonathan, “although the way Bobbie’s presented in the show, as a very open character, of course she would have done that.”

Broadway legend Patti LuPone has hinted that there’s a girl-girl kiss in the show and both boys agrees that getting her to play caustic lush Joanne is a major coup. To Jonathan she’s “amazing” and to Alex she’s “comedy gold”. “And she’s a great company member,” he says. “With her legendary status she could choose to be something of a diva but she mucks in with everybody else and she’s quite playful, which I didn’t expect.”

Jonathan grins: “And she’s got a dirty twinkle in her eye. She’s fantastic.”

More information on Company can be found here.