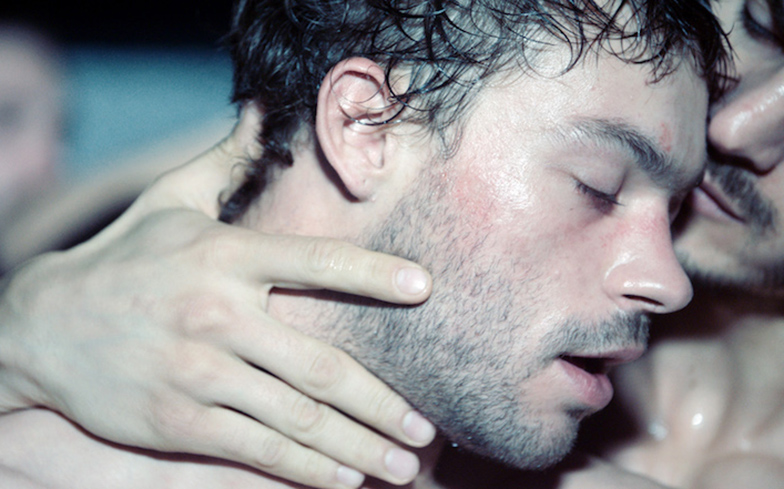 Making his feature film debut after a series of short films, French writer-director Camille Vidal-Naquet isn’t out to judge sex workers, but rather to challenge the stigma that surrounds the subject.

“And I don’t think it’s just in gay society that the stigma exists,” he feels. “Prostitution is a difficult subject for people and they’re quick to pass judgement because they don’t understand how anyone could do this work, men or women. But it does highlight the difference between how society views men and women. When we were shooting the film we discovered a lot of people – when we spoke to them on the streets where we were filming, for example – felt it was absolutely normal to see women hustling but they were extremely surprised or embarrassed to see men hustling.”

There’s something else ni ling the filmmaker, who has created a protagonist named Leo who sells his body for cash but who is also a sensitive, vulnerable gay man aching for love and tenderness. “Why is tenderness between men never represented on screen, ever? I’m not just talking about gay men, I’m talking about men showing affection to one another… It’s very scarce. Between women it’s not a problem, but when it’s two guys automatically there are some questions involved, but I don’t understand why men can’t be men and be tender at the same time.”

Félix Maritaud, the 25-year-old actor who plays Leon’s vulnerability so beautifully, adds: “I love this character because he redefines what masculinity can be. In the movie I think he shows that vulnerability and sensitivity can be real strengths. There are a lot of films featuring toxic masculinity, which is not a good trend, but Leo gives a new vision of what being a man can be and it’s quite radical.”

The inspiration for the film started with its creator imagining a young man looking for love in a brutal world. “Then I had the idea of a man selling himself and going from one encounter to another. That led in turn to this idea of people who live in the street and also sell themselves. I like the idea of representing invisible workers – all these people in a city that you know exist but you don’t know exactly what they’re doing or what their day looks like.”

With male sex workers, he adds: “I felt like they’re never represented on screen. You never see them, especially in French cinema. I’ve seen some films that represent them in other countries, like My Own Private Idaho for example, but that was a long time ago.”

Hustling, prostitution and street prostitution are, Camille points out, very different. “Street prostitutes are guys who don’t sell themselves on the internet, usually because they don’t have access to it, and they’re always in the street, which can be a very violent place.”

He wrote a first draft then joined a charity which works with male sex workers, mainly in the Bois de Boulogne park area of Paris where prostitution is rife, so he could meet and chat with them. What was intended as a few roams ended up being a three-year research process.

Related: Rina Sawayama is the future of queer pop

Félix, who previously had a supporting role in 120 BPM, learned about the script through a fellow actor. “I read it and it was like my entire body was vibrating,” he recalls. “I met Camille, we had a discussion about the script and the character, and what was beautiful to me about this character is that there’s no social judgement about him because he’s completely outside the system.”

The actor had met sex workers before but, since Leo is a loner looking for a way out, he opted not to chat to them. “A lot of gay men around my age have hustled or whatever but I didn’t want to talk to them about it once filming started because Leo is on the outside of a world that’s already on the outside of society. I wanted to be present and let him have his own emotions.” Leo is shown servicing older guys and a disabled man and he doesn’t judge the men he sleeps with by their appearance, something Camille discovered to be common amongst street hustlers. “I witnessed that most of these boys don’t pass judgement, especially not when it comes to physical appearance,” the director says. “Their clients are just people.”

The portrayal of a disabled character as a sexual being is ground-breaking, with the director noting: “I don’t know how it is in England but in France the sexuality of disabled people isn’t discussed, like it’s gross to even imagine that. We never talk about the sex lives of disabled people or the sex lives of the elderly. When I spoke to sex workers they said, ‘When you’re old or disabled and gay and you want sex, what do you do? You pay someone and the quickest way is to go to the Bois de Boulogne because they’re not gonna judge you’.

“I was amazed by their capacity not to judge whereas we in the street pass this kind of judgement by never talking about it. That’s something I wanted to address in the film. They treat their customers all alike – if you’re old or disabled it doesn’t matter, you’re someone, you’re a person, and I find that very touching.”

Nudity in the film is as honestly depicted as everything else, with Félix saying: “I don’t have a problem taking my clothes off. When you’re an artist you use everything you’ve got to create art and that includes your body.” It also helped his performance: “The clients were actors I’d never met before and they were on set for just one day. Nudity and playing sex scenes creates a kind of trust and confidence that’s really strong and beautiful. It creates a truth.”

“One thing we all discussed – myself, the actors and the crew – is that we wouldn’t shoot the sex scenes differently to other scenes. All the crew stays on set because if you go ‘Everybody leave who doesn’t need to be here’ it’s like you’re admitting it’s a problem.”