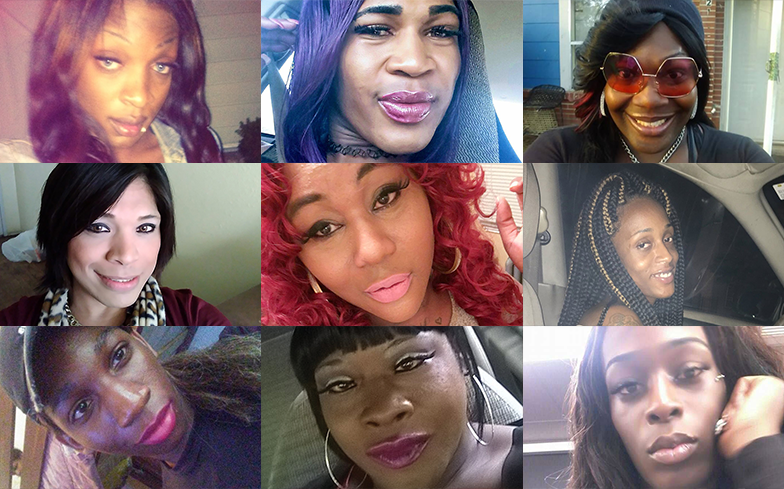 In 2018, 26 trans individuals were tragically murdered in the United States.

While activists around the world fight for trans equality and acceptance, it’s also important to remember the members of the community who have tragically lost their lives, often at the hands of intolerance and bigotry. Christa Leigh Steele-Kundslien, 42, was found stabbed and beaten to death in her Massachusetts home on 5 January 2018. Christa was well known in her local community for her LGBTQ activism, and for being the founder of Miss Trans New England Pageant, which aimed to bring together trans women from around the region. Her longtime friend, Justin Adkins, said: “Her thing was always that transgender women are beautiful and need a venue for trans women to be seen as beautiful.”

On 10 January 2018, Viccky Gutierrez, 33, was stabbed and set on fire in her Los Angeles home. Her friends described her as “a young trans Latina immigrant woman whose warm smile would give anyone comfort.” Bamby Salcedo – the founder of the Los Angeles-based TransLatin@ Coalition – said in a video: “It’s not that she is gone, it is the way that she was murdered. She was brutally murdered, and we believe that it was intentional, we believe that it was premeditated.” 36-year-old Celine Walker was shot to death in a hotel room on 4 February 2018 in Jacksonville, Florida. A close friend expressed her condolences on Facebook, and described Celine as living a “low key life where she did whatever needed to be done in order for her to survive.” Tonya Harvey, 35, was shot and killed in Buffalo, New York on 6 February 2018 in what police described as a “hate crime”. Her friend, Ashley Breathe, said on Facebook: “She was murdered this week and misgendered by media, I knew her since I started transitioning, she was so sweet and loving.” Another friend wrote: “Not only was she beautiful she was strong … everything she put her mind to she did it with conviction.” Phylicia Mitchell, 45, was shot on 23 February 2018 outside her Cleveland home. She was described as a “good person” by her longtime partner Shane Mitchell, “even though she had a drug problem”. He told the Cleveland press: “I miss her tremendously. That’s my soul mate. We went together everywhere. We did everything together. We always held hands on the bus. Years ago people didn’t respect that, but they do now.” 28-year-old Zakaria Fry and 70-year-old Eugene Carroll Ray were found dead in a trash container on 19 February 2018. They reportedly died of blunt force trauma to the head and face. Albuquerque police arrested Charles Anthony Spiess, 27, in conjunction with their murder. Zakaria’s friend expressed his condolences and reminisced on when she helped him come out: “You told me fuck anyone who disagrees, and fuck all of those who can’t accept my happiness.” Amia Tyrae Berryman, 28, was found dead with gunshot wounds on 26 March 2018 in Baton Rouge, Louisiana. A close friend of Amia said she was “loved by so many people” and “was taken away in the very manner she feared.” Her friends also vowed to bring “justice” to her death. Amia’s murderer has not been caught. Sasha Wall, 29, was found slumped over her steering wheel on 1 April 2018 in Chesterfield County, South Carolina, with several bullet wounds. The FBI believe she knew her killer. Close friend Donovan Dunlap paid tribute to his “beautiful sister” on Facebook. “I cannot sleep, I hope they find who did this.”

26-year-old Carla Patricia Flores-Pavón was found in her Texas apartment on 9 May 2018. She had been choked to death. After their investigation, police said there was “no evidence at this time to suggest this homicide was the result of a hate crime.” Carla became the seventh trans woman of colour to be murdered this year. Nino Fortson was the first transgender man to be murdered in the US last year. He was fatally shot on 13 May 2018 in Atlanta. CBS46, the local news station, misgendered Fortson in their reports, which led to community members and allies using the hashtag #JusticeForNino. 28-year-old Gigi Pierce was shot to death in Portland during an argument with Miss Sophia Adler, who has since been charged with her murder. Her death is not believed to be “bias- or hate-based.”

Roxana Hernández passed away while in the custody of U.S. Immigration and Customs Enforcement, after she fled violence and discrimination in Honduras. Her autopsy report revealed that she was beaten in ICE before she died, making her the sixth person to have died in ICE custody since October. Ever since, the LGBTQ community has demanded answers over her suspicious cause of death. Antash’a English died from a gunshot wound on 1 June 2018 in Jacksonville, Florida. Weeks before her death, Antash’a posted a selfie to social media in which she proudly declared: “I will no longer be a victim of discrimination. # Trans rights.” She was described by her good friend Taliyah Smith as “an unapologetic, bold and loyal person”. Cathalina Christina James was shot at the Quality Inn on Sunday, 24 June 2018 in Jacksonville, Florida. She became the third black transgender woman to be murdered in the city last year. Several friends mourned her death on Facebook. One post read: “Another trans girl shot and killed is the last thing I want to hear. No [matter] the life we may know they lived there is a level of respect that should be held to life. REST IN PEACE Cathalina Christina James put some respect on HER name.”

58-year-old Keisha Wells was shot and killed in a parking lot in Cleveland, Ohio. Her aunt, Regina Spicer, said Keisha was known as “Pokey” to her family and friends. “Pokey liked laughing and telling funny stories about people. But when (she) loved you and cared about you, (she) loved you,” she told reporters. Sasha Garden was found deceased on 19 July 2018 in Orlando from “traumatic injuries”. The Orange County Sheriff’s Office urges anyone to come forward with information about her death for a $5000 reward. There are no suspects so far. Diamond Stephens was driving home from work in Meridan, Mississippi, when she was killed (18 June 2018). She was found with a gunshot wound in the back of her head, and it’s suspected that one or two other individuals were in the vehicle at the time of her death. There are no current suspects. 18-year-old Vontashia Bell was shot multiple times in Shreveport, Louisiana (30 August 2018). She was found at 4.30am and was rushed to hospital, where she was pronounced dead. Shortly after her death, local news outlet The Shreveport Times reported her murder and misgendered her. Community group Louisiana Trans Advocates said: “Vontashia Bell must not die in vain.” Just hours after Vontashia Bell was murdered, 24-year-old Dejanay Stanton was found with a gunshot wound to the head (30 August 2018). Stanton’s family and LGBTQ advocates mourned her on social media, and demanded justice for her death. Her brother Darius posted on Facebook: “As I’m seeing all these post about my sister I could tell she was (loved) by many. She was the back bone to some of y’all… Even (though) we didn’t have much, she offered it all.” Shantee Tucker was found on a highway in Philadelphia with gunshot wounds in her back, and was later pronounced dead at Temple University Hospital (5 September 2018). She became the third trans woman of colour to be killed in seven days. Friends and family mourned her death on Facebook, where they described her as “beautiful inside and out”. Londonn Moore was shot multiple times in a remote area of North Port, Florida on 8 September 2019. “We have no information at this point that it was a hate crime,” Joshua Taylor of the North Port Police Department told WBBH. “However, it’s on the table; certainly it could come out that way.” 28-year-old Latinx transgender woman Nikki Enriquez was murdered by an intel supervisor for the U.S. Border Patrol, who took the lives of four women in what local officials describe as a “serial killing spree”. His fifth victim managed to escape, and he has now been detained by authorities. Ciara Minaj Carter Frazier was found on 3 October 2018 at an abandoned building in Chicago’s West Garfield Park neighbourhood, and is believed to have been killed by a man she had an argument with. An autopsy ruled that her death was the result of multiple sharp force injuries. Regina Denise Brown from Orangeburg died after her home was set on fire in October 2018. Ex-convict Kenneth Lamont Jenkins, 37, was arrested after he confessed in November that he killed her after a physical altercation.

Tydi was fatally shot in Baltimore on 26 November 2018. Not much else is known about her death, and her identity is being withheld until police can locate next of kin. The Baltimore Trans Alliance said in a statement: “Our hearts are heavy, and even more so at a time when violence in our community is at an all time high; with Black trans women being targeted specifically.” Keanna Mattel was killed in Detroit by gunshot wound in her Palmer Park neighborhood on 7 December 2018. Mattel – who previously went by the name Kelly Stough – spoke to The Guardian in 2015 about the violence against transgender woman and the lack of help from authorities. “The police are unaware with our struggle so they have no sympathy for us,” she said. “Nobody ever asks, what happened to that person to get here?”