Read Gaysians CEO’s letter for Gay Times: “It’s a historic moment for us as a community” 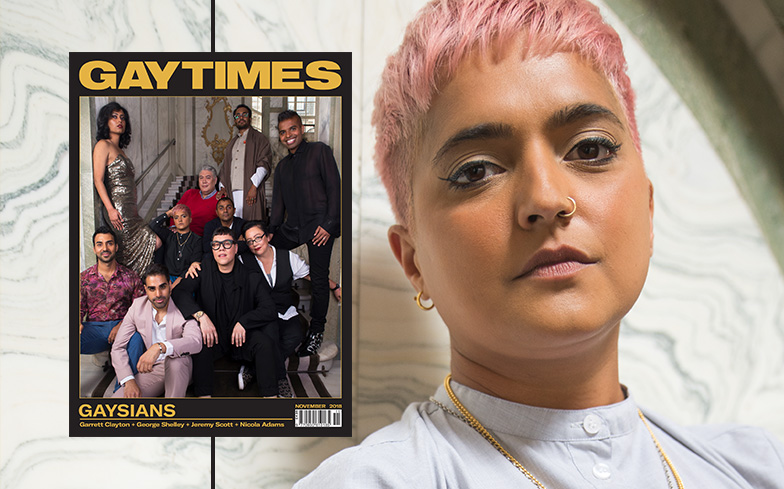 When Gay Times approached me to help them curate a list of leading Gaysians for the cover, I smiled from ear to ear – then I’m pretty sure I cried.

We have a problem with visibility in our community, which makes it harder for us to accept and celebrate ourselves. What better way to challenge this than by putting ten beautiful, successful, out Asian LGBTQ powerhouses on the cover.

This cover marks an important moment in the life of each individual and their lifelong dedication to their work whilst being visible, queer and Asian having been recognised – thank you Gay Times. But also, it’s a historic moment for us as a community. A community that is still so young in its forming that perhaps this is what brought out the playfulness that spread across the room at the shoot itself. Looking at each person and seeing a reflection of yourself, of your inner journey and a connection that transcends lifetimes.

I write this as we celebrate the scrapping of legislation in India that criminalised homosexuality; Section 377, for 154 years. This landmark ruling by India’s Supreme Court on 6 September is not to be underestimated, from a country that will become the world’s largest population in just a few years’ time and has wrestled her way back from colonisation to become a global player once more. This move sends a signal to countries all over the world with similar legislation, to do the right thing in the safeguarding of its people. That this is what progress looks like. That I can feel proud to be Indian.

The selection of faces you see on this cover allude to the diversity held within the world’s largest continent, but also in each of their lives and stories which you’ll read more about in this issue. But first, let me tell you a little about them. Lord Waheed Alli is the first member of the House of Lords to publicly come out as gay, which he did whilst successfully leading the repeal of Section 28, and is one of very few out gay Muslim politicians in the world. He is also an extremely successful entrepreneur leading organisations including Silvergate Media, Koovs and previously Planet 24 and Endemol.

Rena Brannan is a brilliant playwright – check out Shutters, her intersectional play about lesbians and bisexual women set in LA and London over 20 years – and a Korean American lesbian and Film Editor for DIVA magazine. Rena is also known for her marriage to British actress Sophie Ward. Their love is an inspiration to me and many other people that see it as evidence that ‘love conquers all’. We
all want a love like theirs.

Gok Wan is a name we all know and love, originally through his work in fashion. He inspired a generation of women to feel confident in their bodies with Channel 4 series How to Look Good Naked. Gok has spoken in his autobiography about his own journey with body weight and depression, constantly being honest and open and helping others in every way he can. He continues to inspire and surprise us with his cooking show and most recently his move into DJing.

Luke Pagarani is CEO of Natco Foods. Yes, they produce chickpeas, lentils and turmeric and the like. His grandfather started the company, however, under Luke’s leadership the business now contributes 100% of its profits to women’s and LGBTQ charities in India. Along with his siblings, he set up the Human Capability Foundation that currently supports 30 charities in India at grassroots level, creating genuine improvements to the lives of people that need it most.

Dr Ranj Singh is the resident doctor on This Morning and has most recently been strutting his stuff on Strictly Come Dancing. Despite being outed, this hasn’t stopped him becoming one of the nation’s sweethearts and a glowing face of Gaysian Britannia.

Asifa Lahore became known as the UK’s First Out Muslim Drag Queen, proudly performing all over the country. Now a trans woman, she embodies the love and kindness of someone that has faced the challenges of multiple intersections head on and kept on growing, smiling and shining.

Jonathan Phang is a chef and newsreader at Radio DIVA and had a show on Food Network UK. However, before that he was a judge on Britain’s Next Top Model and before that, he was the agent to Naomi Campbell, Jerry Hall, Tyra Banks and Liv Tyler. Not even making this up.

Suki Sandhu is a recruitment specialist and the brainchild behind INvolve and its brands, including OUTstanding, a membership-based LGBTQ organisation which publishes an annual role models list. He’s led the charge to help make workplaces more inclusive in their hiring and helped many more people feel that they can be out at work.

Krishna Omkar is a highly successful lawyer and contributed to the successful repeal of India’s Section 377 legislation.