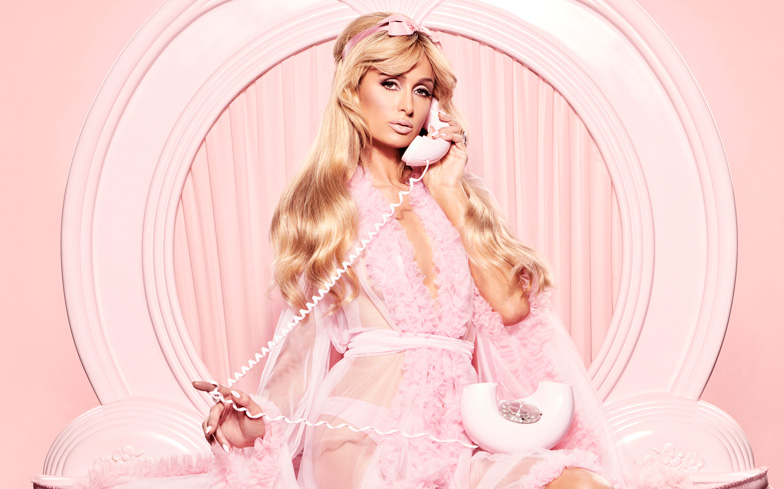 So like, we all know that Paris Hilton has never been one to keep quiet when she doesn’t like something. Hell, it’s why many of us love her, let’s be honest.

An outspoken ally of the LGBTQ community who’s now using her platform as an advocate for minority groups, it’s no surprise that getting her to cover our December issue didn’t take much convincing. After all, it was the queer community that sat up at 3am watching reruns of The Simple Life and are forever clicking ‘like’ on her Instagram account of almost 10 million followers.

While pink is still her (and our) favourite colour, there’s so much more than the baby-faced reality star we all fell in love with back in the early ‘00s. Paris is now leading the cosmetics world with her award-winning makeup lines and gender-neutral fragrances.

Related: Patrick Starrr on being a trailblazer for men in makeup and working with the Kardashians

Yet with all the success and fandom now bestowed upon her, she hasn’t forgotten who got her there, and the subsections of those fans that need her to speak up when they regularly can’t.

“No community deserves to have their rights taken away from them,” Paris states during her interview with friend and pop princess Kim Petras, making reference to the dark political rhetoric being pushed on the trans community in the US currently – something she posted about and received upwards of 724,000 likes on back in October. “Sending love to everyone in the LGBTQ community! I stand for you. I support you. I applaud you for being free to be who you are,” she wrote.

Here, in a UK exclusive interview, the OG influencer speaks to Kim Petras about trans rights in the US under the Trump administration, the possibility of The Simple Life ever returning, and the pair play a hilarious game of That’s Hot.

Kim: Let’s get right into it! First question, how would you describe who Paris Hilton is?

Paris: Paris is a businesswoman, entrepreneur, a DJ, daughter, sister, fiancé, advocate and a lover of animals.

KP: Girl, that’s a lot of things. That’s amazing! And a bad bitch.

KP: What’s the biggest misconception of who you are?

PH: I think the biggest misconception is that people still think I’m the ditsy blonde from The Simple Life. What most people don’t know is that it was a character that I came up with for the show and created for several reasons. I had so much fun doing it and I love being able to prove people differently today.

Related: We review the year #20GayTeen with Hayley Kiyoko

KP: How would you say the LGBTQ community shaped your career?

PH: The LGBTQ community has always been so open, kind and accepting to me ever since the beginning. They’re incredibly supportive of me as a person and a businesswoman, and they’ve been on this amazing journey throughout my career and taught me so much along the way. They’re so inspirational to me in every way.

KP: The gays love you, man!

PH: And I love them! KP: Tell us about Jen, your GBF. She was on the shoot and was really excited about you doing a Gay Times cover…

PH: Jen has been my best friend ever since I was a teenager. She’s one of the girls outside my family members that I trust more than anyone. I just love her so much. She’s fun, she’s creative, she takes the sickest photos of me when we travel around the world together and she’s like a sister to me. I’m very lucky to have her as my best friend.

KP: Aw! That’s awesome that you get to do stuff with your best friend. It’s always great to like have somebody there.

KP: You recently posted in support of trans rights on your social media. Why is this important for you to speak out about?

PH: I have several friends in the trans community and have heard their stories of what they went through and the hardships. I think that they’re so courageous and they inspire me. No community deserve to have their rights taken away from them, and the trans community shouldn’t be targeted with administrative regulations on their human lives. I plan to use my platform to speak out and to continue to give this community a voice.

KP: Thank you so much for doing that, by the way. As an ally to the community, how do you use your voice to stop transphobia, homophobia, and anti-LGBTQ hate from spreading, which I know you’re passionate about?

PH: Yeah, of course. Social media is such a powerful tool when you use it for the right reasons. You see so many people using it to write hurtful posts and comments being mean to people. I think it’s important for me to spread love, tolerance, acceptance and support everyone – especially the LGBTQ community.

Related: One year later, we asked Vanessa Hudgens if she’s still “so into voguing”

KP: Yes, totally! Your public image as a businesswoman changed how many of us see you. You’ve highly successful fragrances and your ProD.N.A. line out. Why was this a career move you wanted to make? And I know you love fragrances and your fragrances are sick. I like still use the ones you gave in that big bag when we filmed the video…

PH: I’ve been in the fragrance business now for over 15 years now. I love perfumes and have done since I was a little girl. I just always loved perfumes and I remember when I was making my first, and now I’m soon to be launching my 25th fragrance which is such a dream come true. PH: I grew up watching my mom use her skincare and perfumes, and I was always interested in it. Now I’m able to share my beauty secrets for skin, fragrances, and having amazing skin, and I’m excited for everyone to try them!

KP: Same! Would you ever consider creating a gender-fluid makeup line?

PH: Yeah, of course! I think that would be amazing. I’m always thinking of new ways to make sure my products are inclusive, such as my fragrances, that all genders will love.

Related: Kele Okereke interview: It’s not about one voice that speaks for all

KP: I know a bunch of guys that are already wearing your fragrances and try your skincare. Are people often surprised you have multiple successful businesses alongside being a global superstar?

PH: It’s definitely a surprise for people when they hear that my product lines are sold all over the world. They’re always asking me why I travel so much and it’s because I love what I do. I travel throughout the year whether it’s to DJ or my product launches. I love meeting with my fans around the world and getting to spend time with them, and it’s important for me to optimise my time when I’m in these different cities and countries and visit local charities and give back.

KP: Amazing! So you’re kinda the OG girl we all became really addicted with long before social media became a thing. Would you say that Paris Hilton basically created everything we’re obsessed with now? KP: I’m sure you get asked this all the time in every interview, but do us blondes have the most fun?

PH: I think we do. I think everyone has fun, no matter what hair colour you have. I think if I had rainbow coloured hair I’d have more fun. Yeah, I would agree with that. I definitely have fun.

KP: We have to talk about the selfie. Basically, in 2001, you invented it. So what’s your best advice for getting that perfect selfie?

PH: I think it’s definitely important to keep your pose and the lighting and the way you hold the phone.

Related: Kim Petras on her zombie apocalypse survival plan and how she’d die in a horror movie

KP: And I know you have a light-up phone case, right?

PH: A total ‘yaaas’ would be that I love anything that’s pink and sparkly or colourful or neon coloured. Clothes that stand out and that make a statement and that you can have fun with. I love having fun with fashion.

KP: And you’re killing it with fashion.

KP: But is there a look from your career that you look back at and kind of cringe a little bit at? You’re like ‘Eeek’, I wish I’d have never done that!

PH: Erm, yeah! I think everybody has had that time where they’ve worn something they’re not that into now.

KP: For sure, I’ve had some tragic-ass moments for sure. KP: So we’re all so obsessed with The Simple Life. I’m honestly rewatching it right now and I love it so much. Have you ever thought about revisiting the show again?

PH: They actually approached me to re-do it again but my schedule was so insane that I didn’t have time to do it so I said no, but it would be pretty epic.

KP: You’re just too busy which is amazing because you’ve got so many successful things you’re doing, but how did that show change your life?

PH: It changed my whole life since it was the first of its kind. There really was nothing out there like it in the world. After that show, I got to go all around the world and it really just started my career in this business.

KP: Did it ever feel kinda overwhelming or were you just loving it right away?

KP: I’m sure. How was it appearing in my I Don’t Want It At All video which, by the way, thank you so much. It’s amazing, holding up as a classic thanks to you. Did you have fun?

PH: Yes, I’m so happy you asked me to be in the video. It was so much fun and such a cute concept and it’s so iconic. All my friends love it and we’re literally getting dressed to that song all the time. I’m addicted and obsessed with you and your songs.

KP: Ahhh, thank you! So are you considering new music?

KP: I still need to write that song for you!

KP: I will never forget about it. It’s still going to happen.

KP: Promise! What is next for Paris Hilton?

PH: What’s next? World domination. I’m just going to continue working hard, living life to the fullest, releasing new products, music, and DJ-ing around the world. Just being a boss babe and killing it.

KP: Word. That’s fucking sick! And finally, what does it mean to appear on the cover of Gay Times?

PH: I’m so excited to be on the cover of Gay Times. It means a great deal to me and I’m so honoured to have the support of the LGBTQ community. I had such an incredible time shooting with Vijat and the amazing glam team, and I can’t wait for everyone to see how it turned out.

Download a digital copy of our Paris Hilton cover interview from the December issue here.