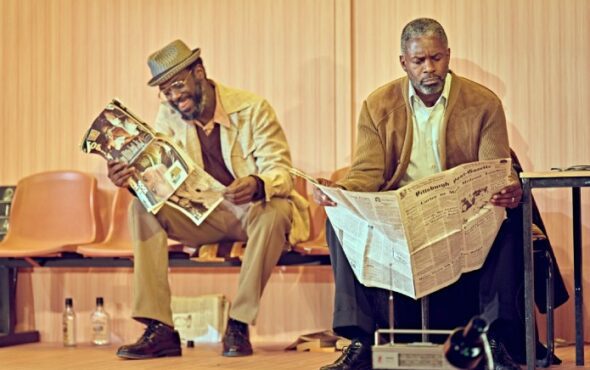 Unfolding inside a small but stylish box set, Jitney tells the story of several unlicensed cab drivers in 1970s America. It’s part of August Wilson’s Pittsburgh Cycle of 10 plays – which chronicle the African-American experience during each decade of the 20th century, and is perhaps most famous for the film adaptations of Ma Rainey’s Black Bottom and Fences. Jitney is the second play from this cycle we’ve had the opportunity to see, after reviewing the London production of King Hedley II in 2019.

It’s a fascinating social commentary: over the course of two-and-a-half hours, what we see is a character study of black men trying to do as best as they can in a society set against them. Although this was the first of the Pittsburgh Cycle of plays to be written, the writing is rich and the characters are fully realised. They’re brought to life through a series of stellar acting performances; we were taken with everyone, although Wil Johnson delivers a real star turn as the exhausted cab firm owner Becker. Clearly carrying a lot of baggage, it’s heartwarming to see his kindness and humour prevail.

This is key to the play’s success – all of these characters are really well-rounded and we completely bought into all their stories. We felt for the men who were struggling and needing second chances; we understood the reasoning behind violent outbursts; we got their motivations and were interested to see how they dealt with their various injustices in different ways. Underpinning each character is a refreshing realism – alongside the more significant moments we see them joke, gossip and argue their way through their days; it all feels very natural. It’s great to see the more sensitive and vulnerable sides of these men.

Jitney is an important and powerful piece of theatre, and it feels just as relevant now as it presumably would have done when it was written. Many of the conversations we see unfold on-stage – from inequality to concerns around gentrification – are as pertinent today as they ever have been. Fascinating, captivating, and well worth two-and-a-half hours of your time.