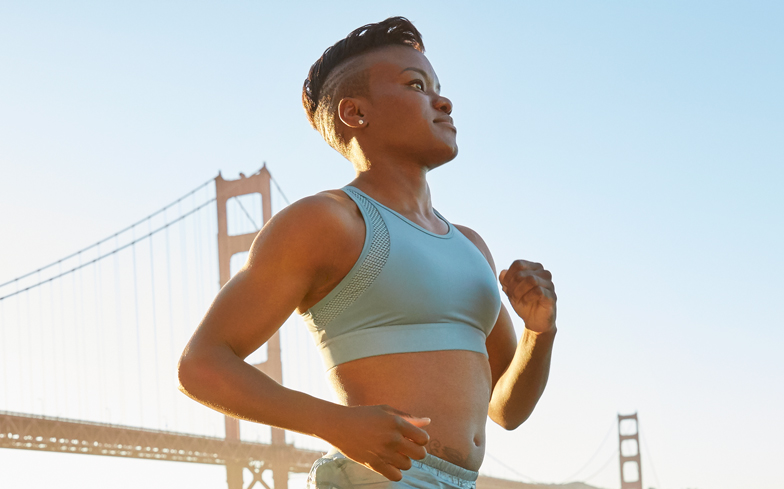 The first time Nicola Adams realised her life was never going to be the same again was when she went home from the London Olympics. She’d just won the first gold medal in women’s boxing in the history of human achievement and thought she could pop to ASDA to do a local shop.

“I was completely mobbed,” she laughs in her trademark hoodie and sweats on her way to her second daily training session out of three in a season that lasts 23 weeks: well, that’s the commitment you make if you not only want to win the Olympic Golds (she followed up 2012 with a second in Rio in 2016) but want to earn the cash dollars, which she can now that she’s turned professional. She recently won a unanimous points victory (if that means anything to you) and is expected to fight for a world title in her next bout in December.

“I had to just leave my shopping and leg it,” she says, not that she minded the attention. “No! It was a nice thing, nice to see that people actually appreciated the hard work and the time that I put in at the gym to win my gold medal for the country, especially as I was the first woman ever to get a boxing gold.”

The whole boxing thing was a bit of an accident anyway, she reckons. “My mum used to do aerobics and she couldn’t get a babysitter so she took us to an after-school boxing class that they had at the same place,” Nicola says of her upbringing in Leeds. Her mum, a single parent with two children, is now her role model, the person who told her that if she wanted something she had to work hard for it.

Related: What’s it like being a young queer black man in 2018? Matthew Pipes explores

“I used to watch boxing on the TV but I never thought I was going to be a boxer but I absolutely loved it right away,” she explains, even though the boys in the class were reluctant to hit a girl until they learned she could more than hit back. “The coach said to me, ‘I have one rule in this gym and that is that you listen to me because you’re all boxers’, and that’s what I wanted to hear, that you’re not going to be treated any differently.” This was when she was 12 – she’s now 35 – with her first match coming a year later. “I was the only girl in the class, but it’s a lot different now.”

Now, largely because of Nicola’s success in bringing the sport to national prominence, there are facilities for girls to learn boxing, they can go for national championships, box for their country, and won’t be told to go off and try tennis instead. But back then, it was the fact that she was the only girl, not that she was a lesbian, something that she seems never to have had an issue with, that was the problem for some people.

“The main thing in my sport was always the sexism,” she says, “never the homophobia. I’ve never encountered that.” Even her now-beloved coach was resistant to having a young woman to train. “He just didn’t want to train female boxers,” she says, “but I kept on going to the gym and doing all the work and slowly I started to grow on him and now he’s one of the best trainers I’ve ever had.”

A firm believer that coming out is for the crows, she did actually bother to come out to her mum but that was about it. “I was a teenager and I told my mum and she was fine. I think I’d worked myself up, like, ‘How am I going to say these things?’ When it all blew up for me, I didn’t do a big thing in the media to say I was coming out, it was just there, it was open knowledge and I think that’s how it should be. You shouldn’t have to come out. It would be nice to live in a world where you didn’t have to make that statement. Straight people don’t have to. They don’t have to tell people, ‘By the way, I’m heterosexual’ and why should it be like that?”

Even the traditionally tricky subject of sponsorship where the big companies used to withdraw funding if the sports person they were financing turned out to be gay is now a big ‘so what’. Before the Olympics some of the big sports brands made public statements that they would never withdraw sponsorship if an athlete came out. “I don’t think anyone cares. I really don’t,” says Nicola, “I don’t believe any sponsor would take funding away.”

Related: The Heel of Marsha: A poem by Travis Alabanza

Quite the contrary in the case of Nicola, who is now an OBE and fronting a major campaign for skincare brand E45, quite a good match bearing in mind she’s in her mid-30s and could still pass for 16 despite taking a good pounding to the face on a regular basis: “I work hard defending myself to make sure I don’t get hit in the face,” she laughs, admitting she likes that people take her for a teenager. “There’s not a boxer out there who likes getting hit.”

According to research that E45 carried out around three quarters of women focus on the negatives when they look in the mirror and three in five don’t like what they see. “I’ve always been happy with my appearance,’ says Nicola. “And one reason I wanted to get involved was to get women to actually pick out positive things about themselves that they’re actually happy with.”

Having taken instant fame and the first Olympic gold in women’s boxing in her stride, Nicola also took her duties as a role model, which were thrust on her just as instantaneously with her being crowned most influential LGBTQ person in the country in The Independent’s annual list straight after her Olympic triumph. It was something she embraced. “That was amazing,” she says, still a speaker at events and for charities connected with the community. “I didn’t mind, and still don’t, having that role model thing put on me. I liked the idea that I might inspire people just by doing what I was doing and winning medals.”

And it gives her quite a kick when girls come up to her not only to say that she inspired them to come out but that she was the inspiration for them to move from ballet to boxing in a sort of reverse Billy Elliot situation. It’s funny to think back to those boys at her first boxing club who were reluctant to go for her thinking that it wasn’t right to hit a girl.

“They soon got past that,” she laughs now that they’re probably bragging to anyone who will listen that they once had seven shades of the brown stuff knocked out of them by the fighter who will probably be holder of a world title very soon and never mind that it was a girl. “If you’re going to take a beating from a boxer,” says Nicola with that short little Yorkshire chuckle, “at least it has to be a good one.”

Nicola is brand ambassador for a new campaign called Straight Up Women for E45.