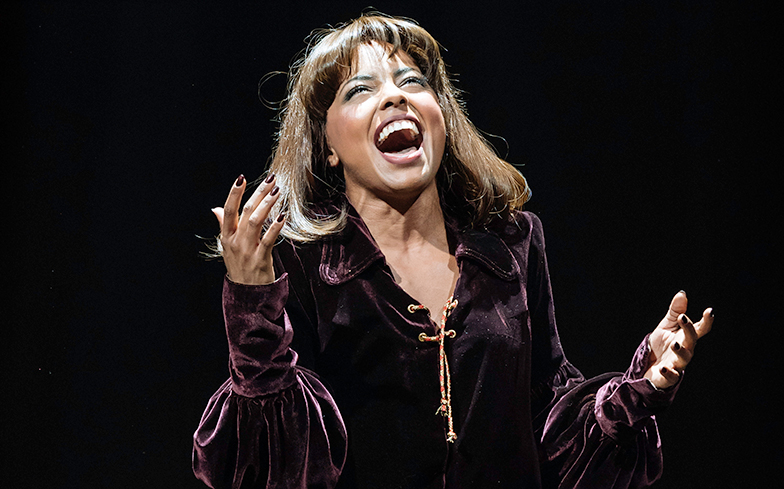 For Adrienne Warren, her entire life has been spent idolising music legend Tina Turner. So when a trip to collect a new script turned into her being part of a secret workshop of the now award-winning London stage musical, her initial reaction was to decline such an offer.

“I thought it was a joke, and I remember taking the script back to my theatre and staring at it in my dressing room. What was happening?” she laughs as we chat in London.

But even when she accepted the idea of beginning to explore what playing a legend like this would be like, Adrienne admits that the reality of meeting Tina didn’t ever cross her mind.

“I never even thought about that until it happened,” she explains calmly, seemingly still in total disbelief that her childhood idol Tina Turner ended up stood directly in front of her.

“I kind of just bowed at her feet, she pulled me up and hugged me and I cried on her shoulder uncontrollably. She was unbelievably giving and loving.”

Now, with a Broadway transfer happening, an upcoming cast album set to be released and Tina Turner basically on speed dial, we find out what life is like for the young actress that’s delivering a career-defining performance that is, well, simply the best! As the biggest Tina Turner fan, this seems like the stupidest question ever, but why was this project something you wanted to be part of?
Because I’m the biggest Tina Turner fan as well, and I think she’s the reason I wanted to be a performer in the first place! My parents played her music non-stop at home and I loved her so much. I’d never really seen anything like her growing up or even heard a black woman sing like that, or move like that, or even look like that. I was absolutely obsessed!

Can you remember what it was you idolised so much?
I think it was her dancing, and it was the music as that’s when I fell in love with rock ‘n’ roll. My dad was also obsessed with Elton John so I constantly heard their music in the house and I remember putting my mum’s nylons on and walking around as a kid with my foot not even a third the size of her shoe, and I’d be sliding around the room pretending I was Tina Turner. I thought she was a force and that’s what I wanted to be – just like that!

It’s funny how similar our lives were as a kid.
Oh I love it! What was it like getting to play Tina Turner for the real Tina Turner?
Oh my gosh! She was coming to the workshop that they asked me to come and do in London – a place where you try the script out and put it on its feet but perhaps without the choreography. You get to see what the scenes might look like in a rehearsal room. You then do a presentation and that’s normally for producers and they told me that she would be there. I was asked if I wanted to meet her before or after the presentation. I knew if it was before that I would be completely thrown off. How can I meet Tina Turner before I play her? What! It wasn’t until we got to Proud Mary, I said that ‘If this doesn’t continue from here and they don’t cast me, I can at least tell my grandchildren one day that I did this’. So I looked at Tina Turner and she was singing along with me and it was the biggest breath of fresh air. She was enjoying it a little bit or at least pretending to – which I’ll take. I was shaking in my boots!

Related: Vanessa Redgrave is fighting for greater queer visibility: ‘These stories need to be told’

Do you remember the first thing she said to you?
Actually… no, because when the presentation was over, she stood up and I kind of just bowed at her feet, she pulled me up and hugged me and I cried on her shoulder uncontrollably. She was unbelievably giving and loving to the entire cast of the workshop. The first thing I said to her was, ‘Was this hard for you to watch?’ and she said, ‘No, you’ve got the hard job now. I already lived it, you’re telling it now’. Idolising Tina Turner is one thing, but at the launch here in London you actually got to sing live with her…
I will say, and I haven’t really spoken about this in a while, but that launch for me was so terrifying and I don’t really get nervous very much, but that specific moment was terrifying because I was in the process of learning about her. Learning about her voice and learning how to implement the essence of her voice into my own, so I felt vulnerable because I wasn’t quite there yet.

Do you have a favourite song you like performing?
All of them? I love singing Nutbush City Limits. It’s such a raw arrangement, the guitar riff in the beginning is funky and fresh. As a fan, I’m attracted to that. Gosh, how can I pick? She’s covered so many tunes as well. I Can’t Stand The Rain? If you listen to that track, you almost can’t understand how incredible she is! Do you find that your mood changes which song you connect to?
It’s so true! That’s very true and there’s been a few which have grown on me. We Don’t Need Another Hero did that.

And now you and your voice will be immortalised with the release of the cast album. No pressure, babe!
Oh my God! I think it’s so funny that when I first got this job, I remember saying that we obviously won’t do a cast album as we’d just do the greatest hits. ‘Release the greatest hits from the show’. Like, I was terrified at first, but it’s such an honour and I’m excited to get in the studio with the music that made me want to become a performer in the first place. Like, what? Come on. It doesn’t get better than that. We will see what happens. I hope you like it!

The show chooses to not shy away from Tina’s volatile relationship with Ike Turner. Was than an important inclusion for you?
Thank you for asking this question as it’s the most difficult part of the show to do, but I will say that it it were not for my acting partner Kobna Holdbrook-Smith, he makes it so easy as he’s not only an incredible actor but a dream of a human – there’s nobody quite as nice as him. It’s almost as if that’s kind of necessary for that role because you need to have a connection as there’s so much trust needed in those scenes. Not only are you doing difficult and heightened scenes that are life or death, but you’re also doing the fight choreography. He has to watch me and see where I fall and see if I fall a little too off, it requires so much trust. Before every show, we check in to see how we are and see the energy of each other as that’s crucial to the safety of each of us – telling the truth being this horrible moment in her life.

It also brings a new level of respect about how she was fighting racism and this at the same time at home, but how she kept going.
She would say that it’s because of her faith and Buddhism. When that came into her life, which is why it’s intertwined into the show, that got her through. When that came in, it was the light at the end of the tunnel. How else do you make a life journey make sense? Why is this all happening? She was able to find peace somehow because of her faith.

Perhaps that strength and resilience is why her LGBTQ following is so great. Have you noticed such support?
I think she loves anyone who loved not just her music, but understands her journey and how she got there, and there’s no other community that understands resilience and persevering than the LGBTQ community. I am so grateful for the LGBTQ community in their support of our show and the support they’ve given Tina throughout the years, and the support they’ve given me. I feel that love and I’m so grateful for it. It’s been an unbelievable journey to see how much her life has touched people and inspired people to push through their own obstacles. I think that is one thing about Tina’s legacy that will never die because she will live through all of us in that way. It makes me emotional just talking about it. The strength she has shown me and what she’s able to teach me about myself, not even directly, but me learning about her. There is no greater lesson than that.

And finally, I’m starting a petition to get Tina on RuPaul’s Drag Race, and maybe even have a Tina Turner inspired challenge. Are you with me?!
I am so with you on that. What a great idea! I wonder if they’ve even reached out? They must have. You do your thing and I’ll do my best this side. We can try to make this happen!