Marys Seacole is an ambitious but overcomplicated new play – review 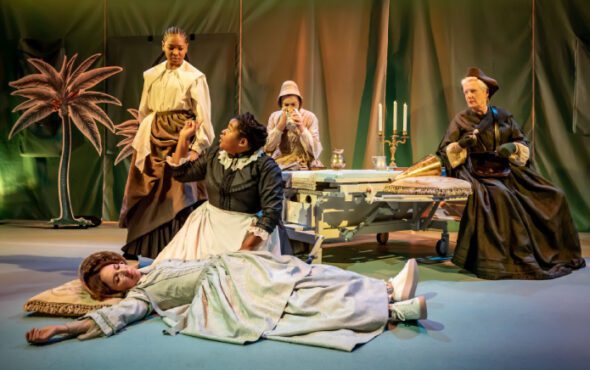 We were thoroughly impressed with Jackie Sibblies Drury’s Fairview, the Pulitzer-prize winning drama which played at the Young Vic in 2019, so we were very excited to see she had a new play opening in London this spring. Drury’s new show is a consideration of the life of Mary Seacole – an important story which needs to be told more often – and it’s an ambitious production, although it feels a bit convoluted and overcomplicated.

This is far from a straightforward retelling. Sure, there are scenes set in the Crimea during her lifetime and we see a few interactions with Florence Nightingale – but for the most part this is a time travelling play which explores caring through the ages, whether that’s in Seacole’s native Jamaica or in the UK or the USA. We see differing attitudes through the lens of different generations and some interesting points are made.

Ultimately, however, it all just feels a bit confusing – a lot is going on, and we get little snapshots into many different lives which don’t really come together as a satisfying whole. There are some exciting moments and some bold choices – a training scene in a contemporary hospital certain grabbed our attention – but it doesn’t feel like it brings its narrative threads to a satisfying conclusion. We get that we’re sort of watching a series of Seacoles through different generations – what would her life have looked like in a different time and place? – and these mini episodes work fine on their own, but we wanted them to go on to something bigger.

It must be noted that there are some terrific acting performances here. Kayla Meikle is electrifying in the lead role, speaking in patois throughout – she had us hanging on her every word. The supporting cast are strong, too, capably playing multiple roles. Sadly, an interesting subject matter, some great performances and a handful of exciting scenes don’t quite hide that this is all just a bit muddled – it feels like it’s trying to say an awful lot but by the end doesn’t quite say enough.