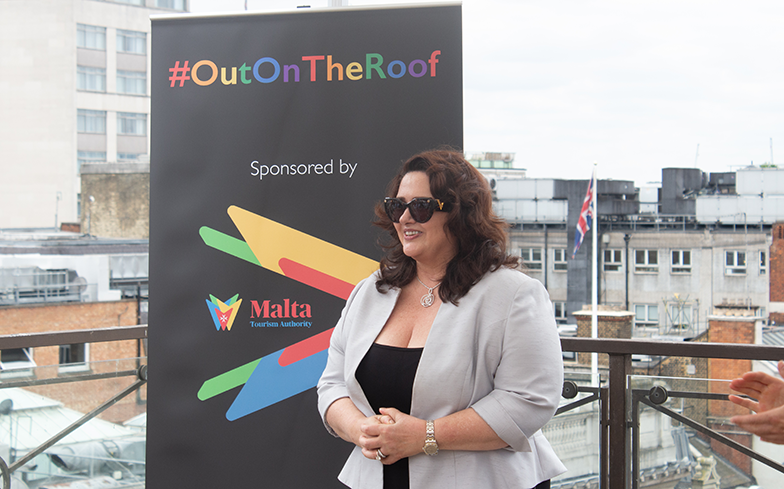 With a population of less than half a million it has a 91% rating from the International Lesbian, Gay, Bisexual, Trans And Intersex Association, making it the European country offering the best legal protection and equality for the queer community.

Much of this is down to Dr Helena Dalli, who has been Malta’s Minister For European Affairs And Equality since 2017. Prior to that she was Minister For Social Dialogue, Consumer Affairs And Civil Liberties and in 2016 she was named Hero Of The Year at the European Diversity Awards for her part in legalising civil unions and equal adoption rights for same-sex couples as well as introducing the ‘X’ gender category, not to mention a ban on conversion therapy that was unanimously passed by the country’s Labour government that same year.

With a PhD in political sociology, she was first elected to office in 1996 and has since become the longest-serving woman in the Maltese Parliament. And she believes in spreading the word, advising other EU countries on equal rights as well as addressing the United Nations.

Having been in London for Pride, where she was the key speaker at a rooftop brunch organised by LGBTQI fund-raiser GiveOut, she speaks to GAY TIMES about her passion for queer causes, why she doesn’t like the word ‘tolerance’ and how she’s not too worried about UK when it comes to equality.

You were in London during Pride weekend for GiveOut’s #OutOnTheRoof event. What do you see as the importance of the GiveOut campaign?
Apart from awareness-raising through seminars and conferences, they’re addressing the reality by raising funds for LGBTQI causes worldwide. They’re putting their money where their mouth is by giving money where it’s necessary, to countries where they still have a lot of work to do to ensure equality.

Why are LGBTQ causes so important to you personally?
I hate injustices and I want to work for a fair world. When we came to power in 2013 equality wasn’t on the front-burner of the previous government. We had a case at the European Court Of Human Rights whereby a trans woman who had won her case in a Maltese court but the government didn’t amend the law so she could marry her male boyfriend. When I was given the portfolio for civil liberties I thought ‘This is not acceptable to have one of our own going to the European Court to get the rights she’d actually won in Malta’. That started a raft of legislation that has put us in the number one position in Europe. Nobody chooses how they are born so how can we as legislators penalise somebody because of that? That’s not acceptable in any society. I’m happy that more people in Malta are living better lives, at least in the eyes of the law. But then when it comes to practicalities there is some more work we have to do because it’s not so easy to change attitudes and culture. Our challenge now is to see that the laws we have introduced are actually working.

Is there a high level of tolerance amongst Maltese people?
Well, I wouldn’t use the word ‘tolerance’. I prefer ‘acceptance’ in the sense of ‘Who am I to say I tolerate you or I don’t tolerate you?’ I have a problem with that word but I think that yes, we are accepting in the sense that when we introduced the first draft of legislation people realised the following day the sky didn’t fall and nothing tragic happened. They realised – and this is how it should be – that as long as you’re not taking away from or infringing upon the rights of others it’s good that you are introducing more rights for people who hitherto didn’t have them. Then when we worked on gender identity and legislation for trans people it was much stronger than legislation on civil union but there was less debate around it because people realised we were doing a good thing. Have you had any negative feedback?
Of course there are people who say they don’t agree with what I am doing and my answer to them would be ‘Would you be of the same mind if you had a gay or a trans child?’ I try to appeal to the simplest of ideas in the sense that you try and make people think ‘Would I say this or do this if they were my children?’ Recently we had a man saying he was gay and now he wasn’t and I said ‘This is causing a lot of harm to teenagers who want to come out and are having problems with their parents’. It meant those parents could say ‘Look, he was gay and now he’s no longer gay so we can try and fix this’ when of course it cannot be fixed. He said I was impeding on his freedom of speech but it was like going on TV and saying ‘Smoking is good for you’. You cannot say something that is causing harm to others and I had in mind all these teenagers who are really struggling and maybe their parents aren’t supportive yet because they’re hoping their children will change and become straight.

Have you been advising Britain on any queer issues?
When I was over for Pride I had meetings on intersex legislation which the UK doesn’t have yet. I also think the UK has a big issue with trans inclusion so a delegation came to Malta last year, where we shared our experience on that. So there are some areas where we’re working with the UK, but I’m not worried about the UK really because you do have good legislation.

Looking at the world stage, does it shock you how so many countries still have transgressive attitudes towards the queer community?
It saddens me a lot, obviously. We do quite a bit of work on an EU level, leading efforts for the adoption of an LGBTQI equality roadmap. We are also active members of the Equal Rights Coalition and have made LGBTQI rights a regular feature in our interventions at the United Nations. So we are always ready to help other countries and we do get asked for advice on policies and legislation. I know we’re only a drop in the ocean but a drop nonetheless.

Helena Dalli, Member of the House of Representatives of Malta.