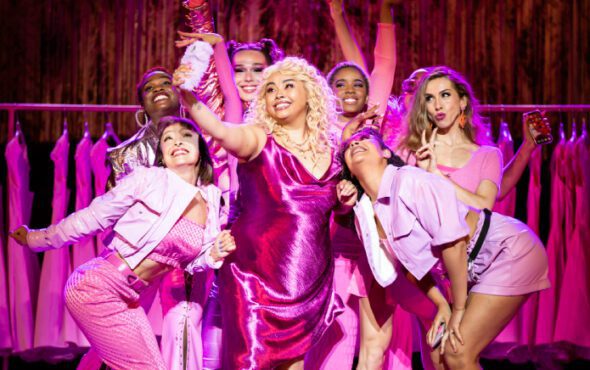 This revival of Laurence O’Keefe, Nell Benjamin and Heather Hach’s 2007 musical – based on the 2001 film starring Reese Witherspoon – doesn’t give the best first impression. The staging looks odd and a bit flimsy, and the costuming rather tacky and predictable – we’ve come to expect an extremely high standard from productions at the Open Air Theatre in Regent’s Park over the years, and our initial impressions didn’t align with expectations. Thankfully, when the show gets under way, the situation improves rapidly.

Lucy Moss – co-creator of SIX the Musical – directs this updated version, which has a few tweaks to the book to include references to Instagram and the Kardashians. The casting impresses – there’s some exceptional talent on stage, and it’s rare to see such a genuine diversity in a major production – this level of visibility from actors of all backgrounds is genuinely just such a joy to watch.

Courtney Bowman doesn’t look like the Elle we’ve seen portrayed previously, but she’s excellent in the role, displaying superb comic timing. She also embodies a real Gen Z energy, and while her moral messaging is quite heavy handed, we don’t expect anyone is turning up to Legally Blonde expecting subtlety. We were also very taken with Nadine Higgin, who steals a number of scenes as salon owner Paulette. While we were disappointed with the set itself, the cast do a solid job of bringing it to life with a number of energetically-choreographed numbers. There’s some inspired use of props throughout and while they’re mostly quite minimalist – books, phones, that sort of thing – they’re used to entertaining effect. The opening number of act two utilises skipping ropes in an impressive manner, but we shan’t spoil the surprise.

We enjoyed an entertaining evening with Legally Blonde. We thought the show was visually a bit underwhelming and some of the lines were pretty clunky, but at its core it remains a heartwarming dose of feel good fun – which is what we expect most people will want from this musical revival.