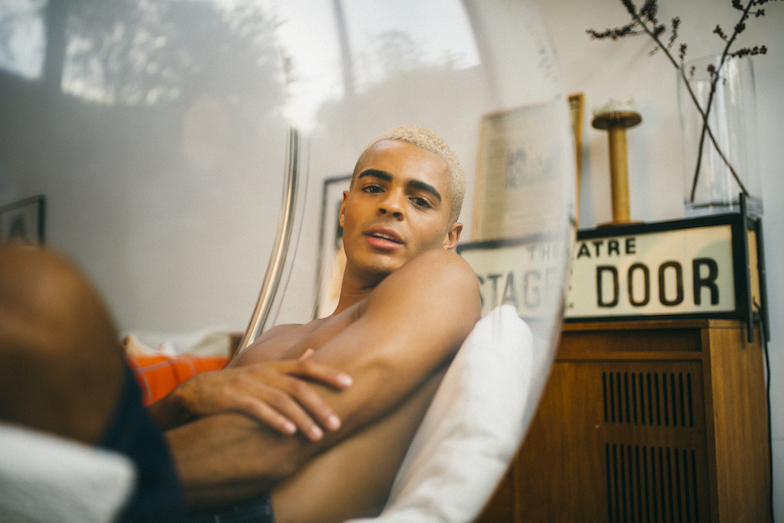 For Layton Williams, his casting in leading British musical Everybody’s Talking About Jamie is more than just a job. His leading man status will see a role that’s traditionally played by a white actor undertaken by a person of colour for the first time.

But more than just seeing a different face on stage, Layton is hopeful that his time as Jamie New – the lead role in the show – will inspire a new generation of young queer teens of colour to know that the world really is theirs for the taking.

“For it to be somebody that looks like them to be represented is special. It really is a big deal,” Layton tells us when we caught up as he begins rehearsals mid-December. However, what perhaps makes this choice an even greater decision was that his skin colour played no direct relation to him snatching the gig. His selection was down to talent, a choice and decision he’s longed for throughout his career. “We need to get one black person in? No. It’s not like that. It’s not been a thought that they [the casting team behind the show] needed to do this, it just worked. It just happened. They thought I was great for the part and that’s it,” he says proudly, hopeful that others will follow in the coming time. “I don’t think they ever thought about the colour situation which I’m so glad and I wish that more of this could happen for more people. As time goes on, I think it will.”

With his script in hand and heels polished and ready to be donned, we talk the power of representation, racism within the industry, and why Drag Race judge Todrick Hall better watch his back, as Layton Williams is comin’ for his crown.

Are you excited for everybody to be talking about Layton?
I love that ring to be but I don’t want to annoy the producers! I am so gaged. I feel like I’ve been waiting for this for a very long time. I want to be that leading man that I feel that I can be and I want to get up there and slay London. Like, come on. Let’s go!

Let’s go back to the first time you saw the musical. I presume you saw it before you auditioned, so what was that experience like going to see a queer show like this?
When I saw it I was really emotional, especially the parts with the mum. It made me so appreciative of everything my mum has done for me and how accepting she’s been. I also thought about how lucky I am to have a dad that supports me, and my whole family really. It takes you on that journey and you can relate. There’s so many things that Jamie says that I thought was me at 16. It’s a special show and for people to see themselves represented, and being a school kid, it’s so important. I was overwhelmed when I saw it in the West End. I came out of the finale and I couldn’t talk. I was in floods and floods of tears. Goodness knows what I’m going to be like on my opening night.

Related: Todrick Hall on Chicago, All Stars 4, and who his bestie Taylor Swift would stan on Drag Race

Even now, a show like this that has a connection to the queer community being on the West End is such a huge thing, and audiences have taken to it so well.
Exactly. You’re very possibly changing somebody’s life. The way some of the fans have created friends through the show. They’ve made a community through it and the fact it can do that and create those relationships as well as entertain people is
helping others. I feel so lucky.

It’s also not a show that presents a gay person as an ‘other’, underdog or trying to make the femme gay kid different. Difference is his power and that feels important politically for today, right?
It’s a celebration. We turn on the news or look on our Facebook feeds and you’ve got so much craziness going on – it’s endless. It never stops. To have this beacon of light where he’s constantly being celebrated up there in lights on the marquee next to Michael Jackson, I mean, come on!

What is it going to be like for a young queer kid of colour to see someone like you living an experience that they probably in their heart didn’t think was possible for them?
It is going to be a little bit different and we can’t deny that, and that’s another thing the team have supported. It’s a bit of a jump to make their new Jamie a person of colour – and why shouldn’t they? It is going to help those people of colour because for it to be somebody that looks like them to be represented is special. It really is a big deal.

Thinking about the relationships on stage, it feels exciting to see a new British musical that tells the story of a young queer kid, that’s also a young black gay kid, who is then best friends with a young Muslim girl…
Get them boxes ticked! It’s beautiful, and I couldn’t tell you another show where a young girl wearing a hijab is represented like that. It really is changing things but it is what we are seeing in our streets, especially living in London. That’s the reality of our
lives, so why not see it represented up there on stage?

I know you joked about ticking boxes but your casting doesn’t feel like a box ticking exercise. It feels authentic.
We need to get one black person in? No. It’s not like that. It’s not been a thought that they needed to do this, it just worked. It just happened. They thought I was great for the part and that’s it. I don’t think they ever thought about the colour situation which I’m so glad and I wish that more of this could happen for more people. As time goes on, I think it will.

Related: Hugo Weaving teases his idea for a Priscilla, Queen of the Desert sequel

From your experience, do you think it’s harder for young gay black actors to get roles in the industry?
I find that it is harder. We can get typecast into certain things. I feel like I’ve been quite lucky to do different roles, especially on stage, and to do ‘white roles’ you wouldn’t think you’d be able to play. I find myself in casting rooms where it’s white people, black people, people of colour; there’s everybody there. I feel we’re all being a lot more open in the industry but I think as a person of colour you do have to see yourself there and go and grab it. I feel like the opportunities are there and, yes, of course there isn’t as much for us, but it’s a certain thing in my brain where I say, ‘Listen, nobody is stopping me from going and grabbing these dreams. Let’s do it!’

Michelle Visage is in the show currently but she will have left before you come in, so shall we replace Michelle with RuPaul upon your arrival?
Oh, God! I can’t tell you how sad I am that she will be leaving the stage before I start. I’ve met her a couple of times and she’s super lovely, but I’m just like, come on. We’d be such cute friends. She can introduce me to Ru and then Ru can make me a judge on the UK version of Drag Race. I feel like I could be the UK version of Todrick Hall and then some. Switch it up on every one.

Related: Stars of Dreamgirls on why the show will forever be an anthem for the queer community

And finally, what do you want audiences to take from seeing you in Everybody’s Talking About Jamie?
I want them to know that not everybody has their shit worked out all the time – no matter what journey you’re going on. He’s a queer boy and I feel like everyone can relate to his journey in some way because we’re following a story where he’s trying to fight obstacles, and his are his father which he needs to get over because his father is completely over him. He’s not aware of that and as soon as he accepts that, he’s free. It’s about acceptance, being free, being unapologetically you. I want people to come into the show and leave feeling like they can slay the world and get out there and do their damn thing! I’m here for celebrating yourself, living your true fantasy, and I feel that is literally what Jamie does. I hope that is a little bit of what I do in my life and I hope I can spread that to other people. I want people to leave with that bit of confidence that they can do that. Leave with a little bit of Jamie and a little bit of fabulousness across the West End. Every time you turn on the news, there’s a lot of shit going down, so come to the theatre, come to the show, cry, laugh, smile and be fierce!

More information on Everybody’s Talking About Jamie can be found here.