Krishen and Andrew: Learning about what it means to be undetectable 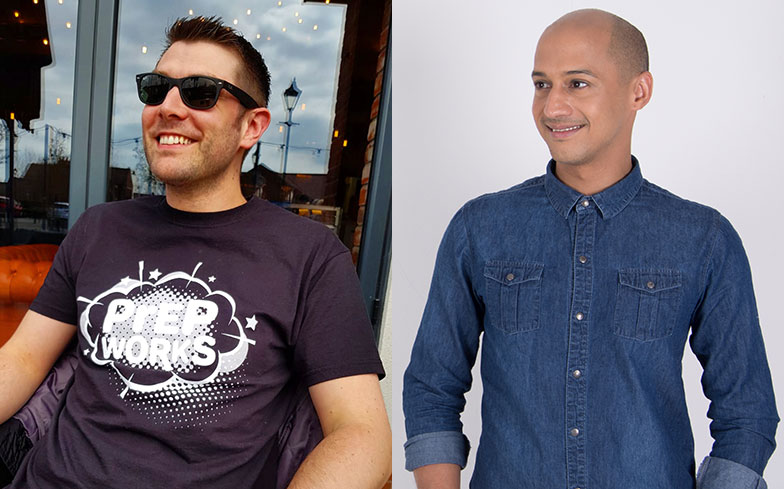 Image courtesy of Andrew and Krishen

Two people living with HIV, Krishen and Andrew, share their experiences of diagnosis, learning about what it means to be undetectable, and using their platforms to help educate others.

Being from South Africa, the country with one of the highest rates of HIV in the world, I’ve always had HIV anxiety at the back of my mind. As a gay man, I’d routinely test for HIV and when I tested positive in 2009, I felt shocked and devastated. I was 22 and working as a speech language therapist, living away from home. The first thing I did was tell my family and close friends who were really supportive at a time where I was feeling guilt and shame. I started HIV treatment in January 2010, not long after I was diagnosed and became undetectable. Now I know that I can’t pass the virus on and I’m so pleased to see this message being amplified to help people know the facts about HIV.

Living with HIV is very different to living with any other virus, simply because of the stigma that it carries. I carried shame because of my status for years, and felt judged not just by the wider population but also within the LGBTQ community. Since moving to London, I’ve become more open about living with HIV, and realised that I could help others take care of their sexual health and get tested for HIV. I joined Youth Stop AIDS and began working in HIV/AIDS activism, and later was part of its annual Speaker Tour. This enabled me to visit universities and speak to decision-makers in the government to spread awareness of HIV and what it means today. Despite the initial fear of sharing my story, the response has been overwhelming and has helped have real positive impact on others, which made me realise how much good can come from a small act of bravery. Medical breakthroughs in HIV treatment mean that I can live a healthy life for as long as anyone else, and cannot pass the virus on. But because of the stigma and lack of knowledge of HIV that exists, my biggest fear is how people will treat me when I tell them, especially people I date. This has been a real challenge.

Being gay and living with HIV means you do get discriminated against, and being a person of colour often means I experience it even more. It’s shocking how much work there is still left to do; so often people behind a screen on a dating app will be racist and stigmatising. Today, I’m proud to live openly with HIV, and help make a difference in the lives of others.

My story has just begun, but I plan to continuing to share it to raise awareness and combat the stigma that surrounds HIV. Andrew is 34, lives with his husband in Lincoln and works for local HIV charity Positive Health.

25 November 2014 is a date that is ingrained into my memory forever. It was the day I was told I was HIV positive. I’d just entered a new relationship and we both thought it was a good idea to go and get a full STI screening, even though I’d been given the all clear two months before. After chatting casually to the nurse and thinking nothing of it, she turned to me to tell me the test was ‘reactive’. I had no idea what that meant, then she carefully explained it meant I was HIV positive. Knowing nothing about HIV at the time, in that moment it felt like my world had fallen apart, and my response was ‘how long have I got left to live?’ She quickly explained to me that I’d be fine, and would live as healthy and long a life as anyone else.

Despite that, I still hadn’t gotten my head around it, and when my partner was called in to join me he hugged me as I broke down in tears. He was a nurse, and so had more knowledge about the virus than me, and was incredible support. I remember feeling very scared and almost numb.

Related: Queer Narratives Beirut: The fight for LGBTQ acceptance in the Middle East

How could this be happening to me? In my head this was something that happened to other people. Later I was told that medication would bring the level of the virus down in my system, and that tablets would make me ‘undetectable’, and meant the virus would no longer be attacking my immune system. Being undetectable, she told me “that the virus could not be passed on”. This changed everything, and was the glimmer of hope I needed, and within three months of medication I was undetectable.

Getting to that stage meant everything to me, and gave me confidence in myself, my relationship and how I thought about the virus. It made me want to educate others and let them know about what ‘undetectable’ means for people living with HIV and their partners.

After 18 months of keeping my HIV status a secret, I told my mum. She reacted exactly how I thought she would – with absolute panic. I gave her the facts which allowed her to get her head around it very quickly. She found huge comfort knowing that undetectable meant I was healthy, would live a life as long as anyone else, and would not pass the virus on.

A few months later, I moved to Lincolnshire with my now-husband, and very quickly learned that people outside of London seemed to have even less knowledge about HIV. I joined a local HIV charity, which enabled me to travel to schools talking to children and young people about HIV and sexual health – watching the disbelief on their faces as they realised how much has changed and how far we’ve come. Despite this, and while telling the pupils that HIV was nothing to be ashamed of, I was hiding my own status while visiting schools and giving these talks. It wasn’t until the third anniversary of me learning that I was HIV positive that I chose to share the information on Facebook. I wanted to dispel myths and educate the people closest to me. Even though I had felt sick with nerves before posting it, the reaction was incredible. I couldn’t have wished for more supportive friends and family. In fact, the status went viral, and I received messages from all over the globe from supportive people who’d seen it online or in the media which felt incredible.

Ending the stigma that surrounds HIV is much harder than treating the virus itself, and when people know the facts, it changes their perception entirely. And on top of that, we now have so many ways to prevent HIV transmission, whether that’s treatment as prevention (like me, being undetectable), condoms or PrEP.

Terrence Higgins Trust’s current Can’t Pass It On campaign is all about raising awareness of what it means to be undetectable, to eradicate the stigma that surrounds HIV. The organisation is also currently running a free HIV self-test programme, where you can order free HIV tests to take and receive results at home, via test.tht.org.uk.