Khakan Qureshi on Birmingham’s No Outsiders protests: ‘As a gay Muslim, I’m trying to see it from both sides’ 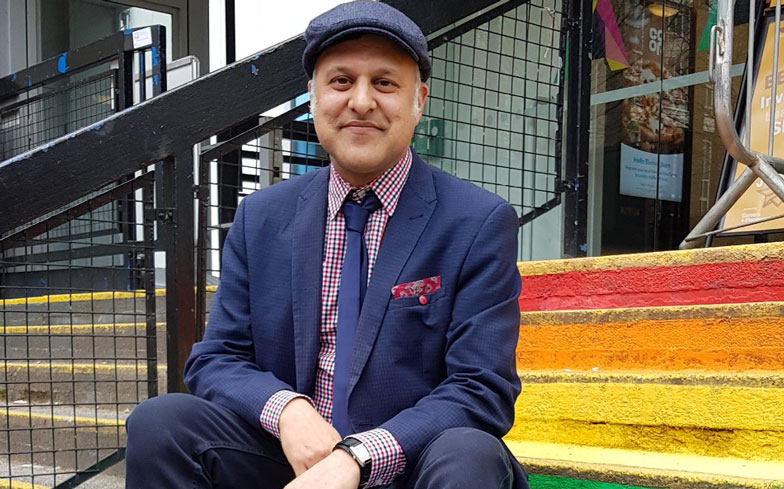 On Saturday 25 May, LGBTQ Muslims led the Birmingham Pride parade for the very first time its 22-year history. I know, because I was right at the front, alongside Andrew Moffat, the gay deputy headteacher who is currently at the centre of the controversy surrounding the No Outsiders protests.

The No Outsiders programme was originally created by Andrew for primary schools in an attempt to reduce homophobic bullying and discrimination. I’m not going to write about it, as much has already been written and it has become a national, if not international, story. What I will say is that as someone who has become inexplicably involved in the story, there are serval issues I am trying to contend with.

The first one is how the parents outside the primary school gates are protesting. I’ve tried to engage in dialogue with them and even though they claim not to be homophobic, the narratives they provide are clearly homophobic in nature. Here are some quotes from the appointed community rep, Shakeel Afsar:

“It’s not okay being a Muslim and being homosexual. We don’t believe in homosexuality. We believe in respect for all human beings.”

And finally: “We’ve got no issue against homosexual people, but don’t tell our children something that contradicts their religious beliefs.”

This rhetoric is repeated many times, not just by one individual, but by others. It seems every time we try to challenge the opinion, the goal posts seem to change dramatically. It varies from “the lessons are not age appropriate”, “it goes against our moral values”, “the school did not consult with us as parents” and “it is linked to the Prevent strategy”.

As a gay Muslim, I’m trying to see it from both sides.

You see, those who object to what is becoming known as ‘LGBTQ Lessons’ are predominantly Muslim. I’ve heard there are Christians and Jewish people involved too, and have had heated debates with Stephen Green, Director of Christian Voices. As a Muslim, we are brought up being told “homosexuality is haram” (forbidden). Again, this is often repeated to me by parents, protesters and trolls on social media.

This level of mass hysteria, toxic shaming of teachers, LGBTQ activists and campaigners reminds me of Section 28 – a clause brought in at the time by a Conservative government which “banned the promotion of homosexuality in schools as it went against the traditional moral values of a Christian family and state”. For me personally, it was a time to withdraw, not speak of my same-sex attractions and hide myself away. It was a very difficult time and my mental health suffered and here we are in 2019, being triggered by the very same sentiments, which has potentially pushed many of us in the closet.

The other part to this is my identity as a gay man. I absolutely advocate and champion the schools and teachers who are striving to educate young pupils about equality, diversity and inclusion. It is a much-needed aspect of the Equality Act 2010, which hopefully, can make children better understand the world around them and realise that diversity matters, we are all different and yet we can all be accepted, no matter how we identify. Hence, why I was standing next to Birmingham Pride. There aren’t many Muslims, progressive or otherwise, LGBTQ or allies, who have placed their heads above the parapet in Birmingham and spoken openly in support of the LGBTQ inclusive lessons.

For me, the importance of the subject matter is paramount to helping young children who may be LGBTIQ feel they can express themselves freely, without shame or guilt, reduce their insecurities and anxieties and enable them to become more confident, independent individuals and secure within their own skin as they grow into adulthood. But trying to have a conversation with some of the protesters and move forward has been challenging, tiring and infuriating. The homophobia is apparent, with some of us even receiving death threats online, which have been reported to the various agencies. I feel I am engaging with a broken record and banging my head against a brick wall.

The protests have been carrying on for weeks now and I think it is time for the authorities, and maybe, even the police to step in and hold meetings to deal with the issue. There has been a call to hold round table discussion with those affected – parents, teachers, LGBTQ activists, campaigners and councillors, to look for a way forward. That has yet to materialise.

I’d really like to say we are winning, but already, with the government being reluctant to act, and trying their very best to appease a community so as not to appear Islamophobic, it seems we have a battle on our hands which is not going to go away. I’ve heard of carefully co-ordinated WhatsApp groups which are to trying to mobilise other Muslims across the UK, plans to try and ban the forthcoming Relationships and Sex Education lessons which come into effect in 2020, and petitions to remove the teachers who are at the centre of maelstrom.

To me, this seems like dark days. We have LGBTQ activists and allies, supporters of the ethos to teach equality, diversity and inclusion within the classroom, yet it seems we are being thwarted in every direction. And having MPs such as Roger Godsiff and Esther McVey wading into the issue does not help our cause and sets us back.

Before these protests started, I was feeling extremely buoyant as I had just co-ordinated the first LGBTIQ+ Intersectionality and Islam Conference in Birmingham, and felt it was a creative way to empower and inspire those LGBTQ Muslims who were feeling isolated, struggling and trying to cope with their dual identities. Little did I realise that the protests would overshadow what I was trying to achieve, but it has made me acutely aware that, in the month of Ramadan at a time when we as Muslims, whether we are practising or Spiritual, are meant to be reflecting on our deeds, actions and speech.

I’m also aware that with Eid just around the corner, when we are supposed to be celebrating the theme of togetherness and happiness, we are all being demonised and vilified, whether it’s homophobia or Islamophobia.

Personally, I feel the protests have to stop and it is absurd to try and allow one aspect of the protected characteristic to trump the other. The one silver lining I have to take away from all of this is the fact that, though I have been an openly proud member of the LGBTQ community for many years, I have always wanted the conversation about faith and sexuality to be more open and transparent. Having protests at the gates of a primary school is not the ideal way one would expect, but at least the conversation is happening now.