Katharine McPhee on Waitress and her creative crush on Sara Bareilles 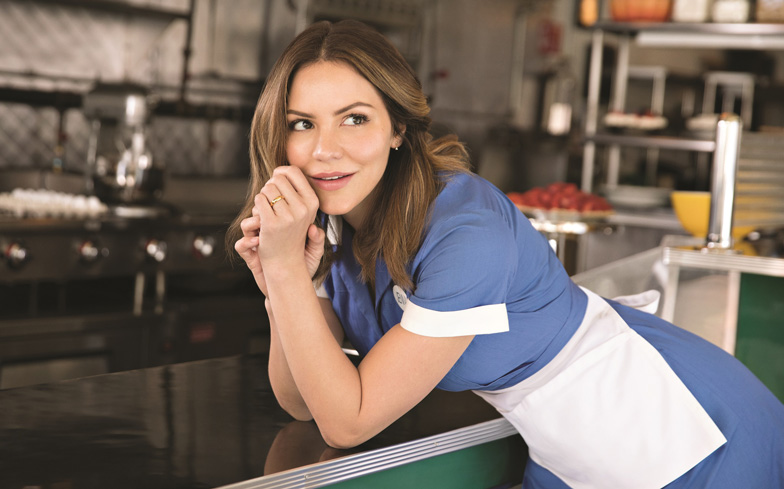 Wasn’t 2013 a wonderful time to be alive as a musical theatre geek? NBC’s Smash on telly each week, every Broadway actress (and legend) you could ever think of making a starring appearance, and the soundtrack of majority original music being filled with bop after bop.

Yes is the answer, yes it was! But six years later and the wounds of the show being cut after just two seasons almost healed, being sat in front of Smash leading lady, Katharine McPhee, was like the greatest throwback, if not the perfect excuse to relive old YouTube clips from the show moments before we chat. But is she up for that stage adaptation we’ve longed for and been promised so many times?

“Yeah, I would totally be,” smiles Katharine during her first week of rehearsals for Waitress – Sara Bareilles’ new West End musical that finds her in the leading role of Jenna, a pie baker stuck with life. “As the time goes by, I’m a realist so I’m not sure what the reality is of something like that happening. Also I’m practical. I’m 34, if it gets going in like six years, I’m not going to be the young ingenue.”

Quick to dismiss such an idea that the original Karen Cartwright couldn’t play her again if Smash did ever come to the stage, we take a bite into Kat’s latest project: Waitress.

“That sense of despair in her relationship and feeling stuck, I really relate to and the fantasy of something that is a drug in some ways – a new relationship,” she tells us of why moving to London to tell a story of this kind connected with her more than she’d first expected. “Why this show works is to take a sensitive thing like an affair, which is clearly wrong, but the show does a beautiful job of not justifying it but redeeming the characters as human and they make mistakes and can turn it around into a positive way. The show does that really, really well!”

We join Katharine in the midst of Waitress rehearsals to discuss swapping New York for London, her creative crush on Sara Bareilles, and why the queer community can always count on her.

First thing’s first… do you actually get to eat pie in this show?
There’s a couple of characters that actually do get to eat the pie, but I’m not one of them. I don’t eat anything on stage which is funny as I’m on stage the entire time and never eat a slice.

So is that a good thing or are you actually missing out?
For someone who is body conscious and I fluctuate here and there, it’s a good thing I’m not eating pie on stage every day!

It might be cool as you are doing a lot of running around…
Oh, don’t worry, there’s goodies backstage and you’re always being tempted by somebody with this or that.

And I hear there’s pie cooking in the foyer?
Yes, there’s a little oven that will be at this theatre, the Adelphi, and you will smell pie when you walk in which is the best smell ever!

Thinking back to when you first came into Waitress on Broadway, why was this a story that connected with you?
Much like Jessie Mueller (original Broadway Jenna), the thing that she said drew her to this role was originally the music because it’s infectious. Sara (Bareilles) is such a storyteller, and I remember the movie, and I loved the storytelling in the songs so thought that I would love to play this part. They came to me funny enough a year later to see if I was interested and I got the role. It was amazing, I had just finished my season on a show called Scorpion, people weren’t sure if the season was going to come back and I was going to do this on my hiatus. Finally a Broadway show because I’ve been offered a couple and I thought that if I wasn’t going to originate something, I wanted it to be a show that feels doesn’t feel tired, feels fresh, and that people are still excited about it. I felt that this was the one and this was a role that I could really do well in and bring myself to it. It was an amazing time in my life to star on Broadway and to be asked to London.

What part of Katharine do you see in this character Jenna?
If it’s a friend or a working place in a relationship or romantic where you feel dependant on this person in some way, and yet it doesn’t feel healthy, I definitely felt that in a certain point in my life where I felt like I needed this person to make decisions. That feeling of being trapped and I connect to that. The part I don’t relate to her is, and I used to be like this when I was younger, but you don’t talk about it, wash your hands and keep going on with your day. Jenna is someone who is in denial, so I’m not like her in that way. If there’s a problem, I want to address it and not have baggage. That sense of despair in her relationship and feeling stuck, I really relate to and the fantasy of something that is a drug in some ways – a new relationship. It ends up being that catalyst for her to get out. It’s straddling an interesting subject because why this show works is to take a sensitive thing like an affair, which is clearly wrong  but the show does a beautiful job of not justifying it but redeeming the characters as human and they make mistakes and can turn it around into a positive way. The show does that really, really well!

Sara told me at the end of last year that, although the show was written after the rise of the #MeToo movement, it feels very timely.
When I started in March (on Broadway), #MeToo was really hot. Now it’s still big but it’s calmed down a little bit. We would have those conversations a lot that it’s an interesting show that purposefully you don’t know when exactly the time is. Is it 2008? Is it 2018? It feels so relevant to what’s going on today and they didn’t plan that, but again it’s a story that rings true universally and I think they’re really smart about how they built this show that it doesn’t pigeon hole into a certain time period, and it just so happens that right now it’s really ringing true for people, men and women.

Are you conscious of the impact this piece will have on people away from the theatre in their own lives?
I was thinking last night about the stage, the theatre, that I was in on Broadway and my last day. You walk across the stage to the dressing room and I took a moment to take in the whole theatre. It’s a really profound feeling to take a moment and realise how many lives, not just with me but this show and this role, how many lives have been touched through the song and through the story – it’s a powerful feeling and it stays with you. I had that memory last night that I was excited to do that again. A lot of times, you see shows and it is just meant to take you out of your life for two hours or whatever, and that’s great! Some shows stay with you for a little bit and this show, for some people, it does that which I think is really special. In terms of your connection to the LGBTQ. Do you recognise that connection through things like Broadway and starring in Smash?
Oh yeah, I love it. Have you looked at my Twitter? I have people come up to me since I’ve become more active on it and – not that it has anything to do with LGBTQ – but the community is a spirited community that I say to people is like my alter ego. I get to feel a little bit more embraced by that community. My mom is a voice teacher and my whole childhood, I’d come home and they’d be people in my living room waiting to go in. She’d have all the students, probably 20s, but a lot of them were gay – women and men – and every couple of months people would come in and out and some for years. I remember that was my
first connection. I’ve been immersed in gay culture and the community for a long, long time and they make the world so colourful.

We mentioned it earlier but there was talk of a Broadway adaptation of NBC’s Smash. Are you still game for that?
Yeah, I would totally be. As the time goes by, I’m a realist so I’m not sure what the reality is of something like that happening. Also I’m practical. I’m 34, if it gets going in like six years, I’m not going to be the young ingenue.

You definitely can be.
Why thank you! As time goes by and things change… I’d love to be part of it in any capacity but I’m not sure if it’ll do anything.

I definitely know enough theatre fans and gay people that would support it.
They would love it!

What’s it like working with Sara?
I don’t know if you watched her co-host the Tony Awards?

Yes.
She’s funny, inclusive, kind. I don’t know her like on a really, really deep level, but I think she’s so open and she’s great. To be able to be a fan and then all of a sudden have her as a colleague is really cool. I’m excited she’s going to come to London and spend more time with her. Anything musically, bring it on. Tell me what you think and I think she’s incredible! And it’s not every day you get to spend time with a now seven-time Grammy nominee…
It says six on some of the posters! We need to update them. Seven times? She needs to win. I love these banners here that has my picture with above it saying ‘Grammy nominee’. It makes it look like I’m a nominee.

And finally, what can we all expect when Waitress opens at the Adelphi?
I’ve never been to the Adelphi. How are we going to fill it? I’m so excited to get into the theatre. This rehearsal week has been great for me as it’s been a brush up! I get to work with Diane Paulus (Director) and there’s so much detail. I’m excited to get into the theatre as that’s where the magic happens. I was telling the other cast members, the joy for me is not learning the part but knowing the part and then getting to live in that every day.