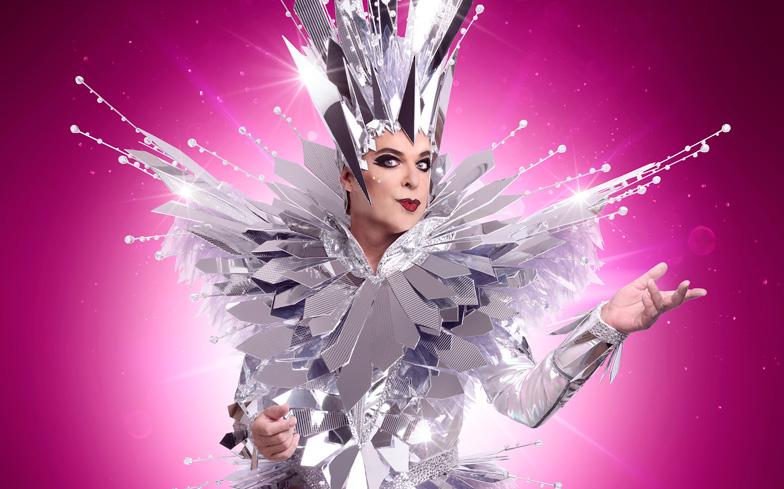 It’s that time of year again (Oh, yes it is!) as the magic of pantomime returns to the world-famous London Palladium with an all-star cast.

Following the success of Dick Whittington last year, comedy genius Julian Clary is set to cause a riot once again, this time as The Man in the Mirror. But how will he make it through a Christmas season alongside Dawn French? And what’s this about him wanting Cardi B in the cast?

Another year, another Christmas at the Palladium in Panto. Did you not learn your lesson last year?
Yes, hello again. Thrilled to see that Gay Times is still being published. Nice for people in the provinces whose only gay contact is the first Thursday of every month at the White Swallow or a mix and mingle at the gentlemen’s latrine at Homebase. Yes, I’m slumming it at the Palladium again. I was hoping for Babes in the Wood at Hartlepool but Gok Wan nabbed that one.

Where will the magic take us to this year?
We’re doing Snow White this year. My scenes mostly take place in the cottage, which is very exciting. It’s good for me to be stretched. And you’re paired with Dawn French this year which sounds like trouble waiting to happen…
Paired? I think you must be mixing us up with Mel and Sue. I’m always heavily medicated throughout the winter months, so there will be no trouble from me.

Dawn is very down to earth – some might say common. She doesn’t kick off as long as she gets her Cornish pasty delivered from Greggs at lunch time. Being from Cornwall she takes her makeup off with clotted cream, so there’s a faint whiff of dairy produce about her. But apart from that, I have no complaints.

Who else is joining you in the show this year?
I wanted Cardi B but according to her agent she’s busy. So we have to make do with Paul Zerdin, Gary Wilmot, Charlie Stemp, Danielle Hope, Vincent and Flavia and some old has been called Nigel Havers.

What do you think it is about panto at the Palladium that makes it such a success?
I think it is all down to the refreshments on sale in the foyer. Kale salad with a urine dressing this year. Delicious. You’ve entered in on a giant bell and spun around on a flying motorbike. Can you let us in on any secrets about your giant entrance this year?!
My entrance is the best thing about Christmas for many people. I don’t want to spoil the surprise – but look out for a dimly lit scene set in a lay-by near the Palace. There is a white transit van driven by a day release prisoner. If the tech rehearsal goes according to plan I’ll be shooting out the back of that vehicle while Nigel Havers sings She Was Only the Woodcutter’s Daughter, but she Soon Matured in the Wood.

And finally, what are you hopeful we can all get from an evening at the Palladium at Snow White?
A hitherto unrecorded STD or a sample of my DNA splashed across your forehead (if you’re in the front row.)