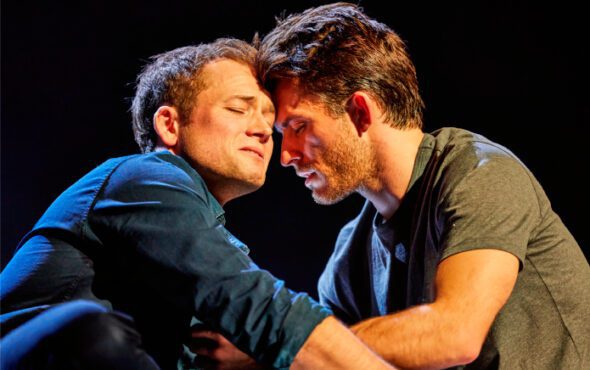 Without wanting to make this review one long, protracted innuendo – we’ve really been looking forward to Cock. With a cast led by beautiful and talented duo Jonathan Bailey and Taron Egerton, this revival of Mike Bartlett’s comedy about identity and sexuality does, in theory, tick pretty much every one of our boxes. It also stars Jade Anouka – who we’ve seen before, and really rate – with the renowned Phil Daniels completing the cast.

It focuses on the story of John (Jonathan Bailey), who lives with his long-term partner, M (Taron Egerton). Up until the point we meet them, we assume they have been living as a conventional gay couple, but John now has a problem – he’s decided they’re incompatible. He leaves, and returns with a further dilemma – he’s had sex with a woman, W (Jade Anouka), and he doesn’t know what to do. Over the course of 100 minutes (no interval) we see John’s identity crisis play out through a series of conversations individually with M and W and, most entertainingly, one with both of them – which also sees M’s father F (Phil Daniels) join for reinforcement.

There’s a lot to enjoy. The dialogue is genuinely very witty, with some incredibly biting lines which had us simultaneously cringing and laughing out loud. It’s full of neat observations, too. There’s some fine acting on display – Jonathan Bailey is convincingly narcissistic and toxic, Taron Egerton is particularly strong when he appears to be losing the power struggle in their relationship, Jade Anouka has a commanding stage presence, and Phil Daniels – although in a fairly minor role – has many of the funniest punchlines, and delivers them perfectly. For all that – something just doesn’t seem to sit quite right. We found it rather jarring that John simultaneously decries labels as outdated, yet spends the entire play obsessing over whether he’s gay, bi or straight. It also feels like it misses the mark a bit in today’s queer discourse: when it was written in 2009 we could imagine this was pushing some boundaries, but its central dilemma – whether sexuality, and sexual identity, are fixed or whether there’s a scale and an element of choice – probably won’t land with audiences in the same way as it did before; it feels like the conversation has moved on.

The performance is punctuated with some Matrix-style slow motion scenes which we weren’t entirely convinced by – the stylised sex scenes work, but we felt that many of the others didn’t really add anything. The staging and lighting are reasonably effective, although we weren’t sure that the minimalist nature of both was an ideal fit for the overtly theatrical acting style. We still enjoyed our evening with Cock – our central couple make an entertaining double act, especially when they’re bickering – and there’s solid acting here from a quartet of talented performers. It just feels a little underwhelming – what we assume was an exciting, fresh and provocative piece of theatre in 2009 is now just an entertaining play. Enjoyable, but not essential.

Tickets for this review were provided by Seatplan who have a mission – to encourage their users to add their seat view photos, to help future audience members choose the best seats. You can check out their interactive seating plan for the Ambassador’s Theatre here.