Jiwandeep Kohli: ‘Our shared identities can help us lift each other up’ 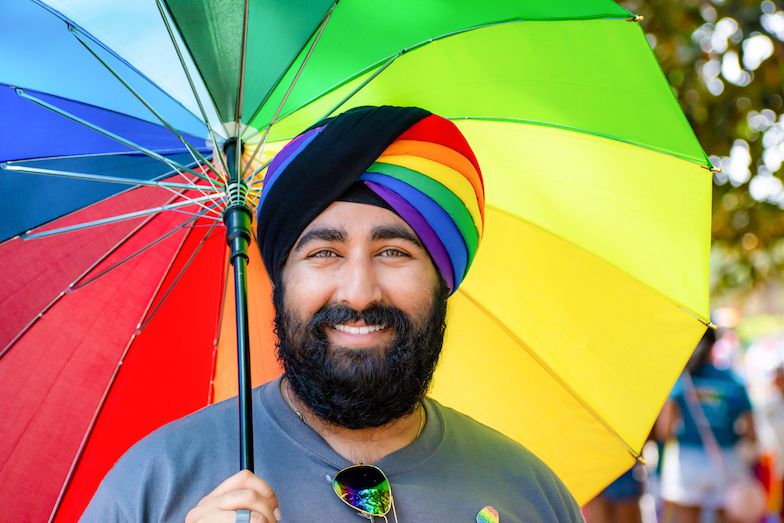 I was scrolling through my Twitter feed on 1 June, admiring a series of Pride month posts. They caught my attention because until that day, I had mostly been using Twitter to keep up with new science and complain about graduate school.

I felt compelled to contribute my own Pride tweet though, so I dug back in the archives of my camera roll for an almost year-old photo and wrote up an alliterative expression of some of the aspects of my identity of which I am proud. I didn’t think much of it – after all, this wasn’t the first time I’d shared this exact photo on social media. For whatever reason, however, this tweet launched me into 15 minutes of viral fame and set the stage for a series of much deeper conversations about Pride and identity.

The question of identity has always been at the forefront of my mind. I am a Sikh, and as an expression of that identity, I wear a turban. The turban symbolizes a commitment to stand up for equality and justice. It’s a uniform I wear to make certain that I can be easily identified by others as a source of support. Wearing a turban is an enormous responsibility – it represents a pledge to do honest work to benefit other people. It also means standing up against attacks on justice in the larger community. Sikhism was founded in India during a time of religious persecution, and one of the values that have carried through since that time is imperative to stand up for all those who are oppressed, not just those with whom we personally identify, whether in terms of religion, class, gender, or other aspects of identity.

It was with these values that for San Diego Pride in 2017, I chose to make another aspect of my identity, my bisexuality, as visible as my religion. This made perfect sense to me, as Pride’s roots in protest are not dissimilar to those of Sikhism. In June that year, I had seen a photo of a man in a colorful turban at a Pride parade, and our Pride festival falls in San Diego falls in July. With the benefit of this inspiration, some extra time, and a great number of safety pins, I crafted a rainbow into the layers of my turban. What better way than with a Pride rainbow to show that my values for inclusivity and egalitarianism extend beyond just religious freedom? Not many people in the places I’ve lived know what a turban symbolizes though, and so what is meant as a sign of integrity can sometimes engender confusion or fear, simply because of its ‘otherness.’ I’m often the first person in a turban that people meet or even see in person, so I’m used to stares and furtive glances. The looks I got on the day I wore my Pride turban for the first time were different though – strangers smiled at me, ran up to talk to me, and asked to take photos with me. Their sheer joy was palpable, and it was with that positive reinforcement that the Pride turban became a yearly tradition of mine.

So on the first day of Pride Month this year, somewhat impatient that I would still have to wait more than a month to don my rainbow turban again, I tweeted a photo from the previous year along with this message: “I’m proud to be a bisexual bearded baking brain scientist. I feel fortunate to be able to express all these aspects of my identity, and will continue to work toward ensuring the same freedom for others.” The immediate criticism I received for my omission of commas notwithstanding, I knew that this tweet had the potential to unleash negative backlash, but I figured it wasn’t very likely to make it beyond the progressive, liberal twitter bubble of scientists in which I lived. This was clearly a naïve stance, but not just because of the propensity for negativity on internet, for which I was fully prepared. It was actually the immense positivity that caught me by surprise. I had no idea of the massive number of people who would resonate with my story, with any one or more of the aspects of my identity that I had put on display. The messages poured in. They came from queer people and straight people. They came from Sikhs and non-Sikhs. They came from scientists and non-scientists. They even came from some fellow purveyors of pastry after people realised that was what I meant by “baking” brain scientist. All these people said essentially the same thing; they saw themselves in me. They saw their identity portrayed in a positive light in mass media, and for many of them, it was the first time. And they were proud of me for it.

I’m proud to be a bisexual bearded baking brain scientist. I feel fortunate to be able to express all these aspects of my identity, and will continue to work toward ensuring the same freedom for others. #PrideMonth  #PrideTurban #LoveIsLove pic.twitter.com/SVhc0iwDF0

There were of course the overt racist and homophobic comments, which I had and continue to have neither the inclination nor time to engage with. There was, however, another specific kind of recurring criticism sprinkled throughout the less sophisticated vitriol, which boiled down to the idea that I should not be proud of being bisexual, simply because that is an immutable quality, not subject to choice. That as such, the very concept of Pride as it exists for the LGBTQ community is inherently flawed. After all, Pride always comes before the fall. Being told that I am not allowed to be proud gave me pause. I sat for a minute to reflect on the statement that I had made, wondering if I was indeed wrong for feeling proud. This was especially unnerving because humility is one of the other major values I strive to keep. Is it even possible to reconcile the two?

It was at this point that I received a very special message. As I stepped off an airplane in the Toronto airport for a layover on my way to a conference in Rome, I observed that I had been launched further into public view by a retweet and reply from none other than former President, Barack Obama. I thought I had already reached my capacity for surrealism with the tweet having gone viral and the string of interview requests, but his reply left me further bewildered and speechless. What a strange world we live in, in which a lowly grad student can garner the attention of a former president on social media. If I had any rumblings of regret about my tweet, you can bet they were entirely assuaged by his response: “You’ve got a lot to be proud of, Jiwandeep. Thanks for everything you do to make this country a little more equal. Turban looks great, by the way. Happy Pride Month, everybody!”

You've got a lot to be proud of, Jiwandeep. Thanks for everything you do to make this country a little more equal. Turban looks great, by the way. Happy Pride Month, everybody! https://t.co/SO7mgnOkgl

It was in his reply that I found an important distinction. He thanked me for the things that I do – for my actions. Our identities are inextricably intertwined with our actions, and we should certainly feel Pride in actions that have a positive impact. I can be proud to be bisexual, because it motivates me to be visible in an effort to normalize this identity in a society that is often hostile toward sexual minorities. I can be proud of my turban and beard, because the religion my parents gave me inspires us to fight for equality and justice. I can be proud to be a scientist, because my research has the potential to help thousands of people. I can be proud to be a baker, because sharing food with others is an expression of love. Finally, in a world where the predominant message often seems to be that we have to tear others down or risk being torn down ourselves, we should be proud that our shared identities can help us lift each other up instead.