Gloria Estefan on her daughter coming out, drag queens playing her and On Your Feet 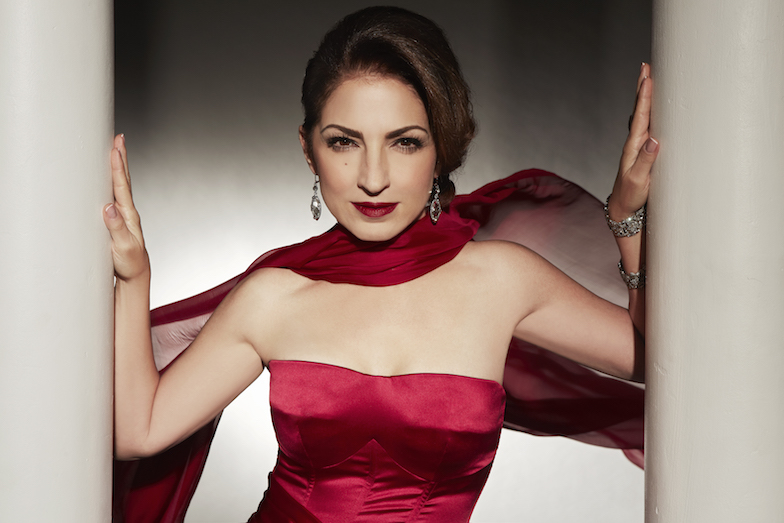 After we narrowly avoided waiting photographers and a gaggle of sneaky fans that managed to find their way outside her hotel, Gloria Estefan greets us with a large hug and even personally pours us a cup of tea – much to our gratitude.

“I love coming to London, it feels like home,” the Rhythm is Gonna Get You singer smiles. The undisputed queen of conga is on British shores for the much-anticipated stage adaptation of her and husband Emlio Estefan’s life. Introducing: On Your Feet.

“It’s a damn big risk any time you step out of your comfort zone and do something new,” Gloria laughs, explaining that On Your Feet actually came from a dream she had years ago. “One morning he comes in and I told him that I dreamed an entire musical. I could hear this music but there was this new music, very Latin, and I wish I could write down what I heard as it was incredible. But, the weird thing, I was sitting in the front row. This was 1990. I’m in Chicago for rehearsals for Broadway and I wanted to check every seat and how it looked. Finally, I sit in the front row and it was one of those things where you get a flashback. This is my dream. I started bawling like a baby.”

Here, we speak to the music superstar about lip-syncing drag queens, why she’s thrilled ballads are rising back to the top of the pop world, and why her daughter coming out to the world was “very, very brave”. Does that level of stardom of having people waiting to see you ever become normal?
Erm… no! It changes from when you’re at your peak and when the music is right on the radar. I enjoy being able to go out and go around rather than trying to sneak out, so I enjoy moments of where you’re not so well-known. I always make the music for the music, not for notoriety.

And you’re a big fan of Twitter. You’re funny on there.
That’s my communication direct and I love that there’s no editing. Before you couldn’t get a message out to your fans as you had to go through someone. I speak to lots of people via DMs and try to chat as much as I can, although it is like a relationship. It takes time and is hard sometimes between Instagram and Twitter – it’s a lot!

Social media can be tough at the best of times, never mind when you’re in the public eye.
I’m very careful what I put on and I avoid getting into the fray of some things, especially politics as I have fans on both sides. I respect them. I’ll make social commentary for sure, but it’s a fine line. I studied communications as it’s fascinating to me and to have written all my life and being able to communicate through lyrics with people, I know the power of the spoken word and I know it’s destructive power. You’re here in London as your life with husband Emilio comes to the stage. Did you ever envisage a musical coming into fruition?
It’s funny as it’s nothing either Emilio or I would have thought to do. First of all it’s a damn big risk any time you step out of your comfort zone and do something new. But funny enough, right after my accident, I had to talk myself into getting out of bed, and I’d been a big psychic my whole life and told Emilio some key things that were going to happen to us. A couple of weeks before, he found me crying in the shower at 3am, he asked what’s wrong and I said, ‘I have a feeling something terrible is going to happen but I don’t know to who’. Cut to that, one morning he comes in and I told him that I dreamed an entire musical. I could hear this music but there was this new music, very Latin, and I wish I could write down what I heard as it was incredible. But, the weird thing, I was sitting in the front row. This was 1990. I’m in Chicago for rehearsal for Broadway and I wanted to check every seat and how it looked. Finally, I sit in the front row and it was one of those things where you get a flashback. This is my dream. I started bawling like a baby.

Does your life being retold and brought to a new audience make you vulnerable to all those emotions again?
It’s exciting, and we shared things that we wanted to. Some things people have no idea about, and some things that were tough because – what’s the point? We wanted to do the show with what our music has been able to do, which is connect. Connecting with people on a human level and not just entertaining them. If you want that, you’ll get that, but we go beyond.

Some of the big music acts topping the charts are repping the ballads like you famously did, the likes of Adele and Lady Gaga. First, what did you think of A Star is Born?
Yes, I love Lady Gaga and think she’s amazing! She’s a force to be reckoned with, she really is a triple threat. This girl has so much talent and it’s great to see her blossom, explore and do these things she’s doing. I loved her on American Horror Story as I’m a huge fan of that show and I’ve been following her career. I remember she mentioned me in one of her documentaries that she used to get in front of the mirror and pretend to be me. That inspires me that I may have inspired artists within music. And Adele, what a beautiful voice that reaches into your soul. I’m a ballad person, this is what I write mostly and what I can play on the guitar. Yesterday I get here and Sam Smith posted about… did you see? I died. Pull up your phone. I reposted it. I’m so incredibly happy about it. He wrote ‘Today I am Gloria Estefan’ and he put ‘I love you Gloria’. He can werk it. He works it better than me! Let’s talk about your relationship with the LGBTQ community. I cannot even count the number of times I’ve seen a drag queen lip-sync to a Gloria Estefan song!
Listen the Everlasting Love video, I was so pregnant I couldn’t do a close up, so I said that I’ll get the me that does me better than me. We had a contest all over the US – I think there’s one girl in there playing me but the rest were all drag performers. I ended up taking two on the road with me from the video. I think it’s fantastic and I love it – love, love, love it!

And you continue to use your voice and platform to speak up today.
I’ve done it from the beginning because I believe it’s human rights. It’s human rights to have every person to be who they are, and to be able to enter into a contract with marriage. It has never been an issue to me. And y’know, the gay clubs were the ones that broke us everywhere. They were the ones that played our music before anywhere else. Your daughter came out as LGBTQ. How did that change your life?
I’m very proud of her. She’s one of the most beautiful, talented, loving, kind humans. One of the things I love with both of my kids is that they’re humble and care about people. It was a surprise to me when she posted that on Instagram. She didn’t give me a heads up and I mean, I knew and knew her girlfriend, but that’s very brave. I think she’s very, very brave to express herself in whatever she wants.

What’s your message to those queer people that currently feel powerless?
You have to speak up, now and always. You have a voice. Power is in numbers and you have to speak up through your vote. Silence is our biggest enemy.

The musical ON YOUR FEET! The Story of Emilio and Gloria Estefan is at the London Coliseum from 14 June – 31 August onyourfeetmusical.co.uk