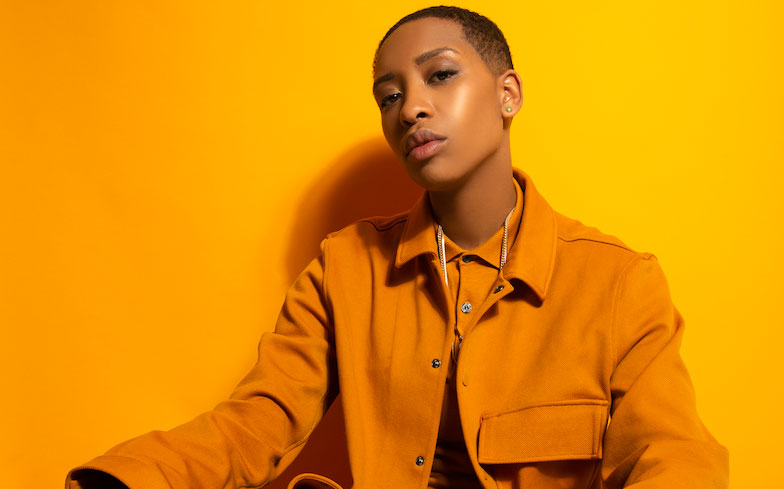 “I think if I was younger and saw a queer woman of colour on BBC primetime playing a doctor, that would have been memorable for me,” actor Genesis Lynea explains to us as we meet in London.

“In fact when I was younger, I think I wasn’t even aware of my sexuality or even the absence of women of colour on screen – blissfully unaware, I guess.”

Currently appearing on screens in hit hospital drama Casualty, the absolute importance of their role on the show isn’t lost. With a generation of LGBTQ teens having a greater understanding of their identity, it’s something that inspires Genesis to keep pushing forward – to be seen, and heard.

“I think young queer people are very open, educated and aware of their surroundings and the portrayal of LGBTQ people in the media. It makes me have so much faith in the future generations to take ownership over their identities and be proud of who they are.”

And while the future remains her focus, running away from the past isn’t an option. It can, she hopes, help build her future.

“My name is Genesis, the most biblical name you can have so I will never forget my roots, but I also know I’m my own person and I’m here to do things only I can do. There is only one of us and that is our power! That’s what makes us all unique.”

Here we speak to the actor about the power of representation on television, why we shouldn’t be afraid to break away from the expectations of the binary, and why her queerness isn’t ever going to be hidden away.

It’s unusual to not see you dressed in hospital gear having spent the last few months following you on Casualty. How’s life been since you join the show?
Casualty has been a beautiful surprise. I auditioned four days before I got a phone call to pack a case and get on the train to Cardiff. It was such a quick turn around. My first day was a massive frenzy of adrenaline and information. Imagine this; get picked up at 6:55am, straight into makeup, into scrubs and then walked to set. On the way through, shaking hands with so many people who are throwing introductions at you, a quick blitz through medical 101 and then action. Eventually you get used to it and get into your own flow. You begin to not find it as hard to learn all the lines and spew out the medical alliteration. It becomes your normality and you forget you’re on television and that people watch you and they get connected to your journey.

Do you think about the visibility your role gives to a young queer teen, and particular a queer teen of colour?
I have been approached by a lot of young black men in particular saying ‘well done’ and ‘It’s so nice to see you doing your thing’, which really blows my mind because I would have never thought that the show was accessing young black men. I hope young queer teens feel seen and heard and that their stories matter with more and more new parts being written, especially with the guest artist storylines. Another regular character like Marty, who is a queer brown male nurse played by Shaheen Jafargholi also supports with the visibility for young queer teens of colour. I think if I was younger and saw a queer woman of colour on BBC primetime playing a doctor, that would have been memorable for me. In fact when I was younger, I think I wasn’t even aware of my sexuality or even the absence of women of colour on screen – blissfully unaware, I guess. I think young and queer people are very open, educated and aware of their surroundings and the portrayal of LGBTQ people in the media. It makes me have so much faith in the future generations to take ownership over their identities and be proud of who they are.

You speak very openly about not being defined by the way you conduct yourself. Why is this important to you?
Fear has wrecked so many lives. It’s the number one killer and will carry on ruling the world unless we break the cycle. I don’t want to live my life in fear of not being feminine enough, straight enough, gay enough, or good enough. It’s a constant battle as an actor because you are your business and you are also in the business of conducting yourself in a certain way. It’s paramount for me to feel comfortable in my own skin in order to then enter a character’s world without fear. It was actually Gabriel Mokake, the photographer I worked on this shoot with, who forced me to go to my audition for drama school at Arts Ed. He truly believed in me.

How has this attitude come into play with your life?
Coming from somewhere like Bermuda, where only just last month did they have their first Pride parade ever, you’re consumed with the idea that you can’t conduct your private life publicly and you can’t be anything other than a straight cis woman. That you have to be a good Christian who minds their business, doesn’t ‘act up’ so not to embarrass yourself or your family with your conduct. Whispers rule the world on such a tiny island because it is only comprised of 60,000 people over a 26 miles radius. There’s limited perspectives and not a lot of room for flexibility for other ways of thinking. We see now this is changing, slowly – but there is movement! My mother worked really hard my whole life to take me away from that toxic viewpoint and allow me the freedom to be myself. I have got to honour that!

Have you felt pressure from others to conform to the traditionally feminine identifying female actor role?
Everyday. When I first came out of drama school and started auditioning, I was so conditioned to being a clean slate, a blank canvas. So much so that I always wore a heel and a dress. As I’ve grown personally, I realised I need to go in as me. They need to see the real me, I don’t want to put on an act to be myself as well as put on an act to be the part I’m working for. So now I will go in with jeans and trainers and be comfy. Obviously if that character is a girl who wears heels then I’ll whack ‘em on no problem.

How would you define your identity today, and do you think it has changed as you’ve grown and understood who you are?
I identify as a writer, a Bermudian, a storyteller, a lover of music and sports, a daughter, a sister, a girlfriend, a lover of people and a very proud queer woman of colour. I’m not saying that I’ve never been with men or will never go back there, but I know that currently I’m attracted to women and can’t see myself engaging with someone who identifies as male. Women are the most beautiful creatures ever and nobody can deny that. I think my identity is based more on me as a person and the people I connect with as opposed to solely my sexuality. Yes it’s part of my identity, but not my only sense of identity. I love that identities have expanded and are now encompassing everyone and we are discovering new ways to identify ourselves. I think we spoke before about how I’ve always been the gay girl but never invested time getting to know other people’s stories and identities because I came to rely on the ‘fend for yourself’ instinct that I think a lot of queer people have beaten into them – survival of the fittest as it were. I look forward to the next chapter of life where I can get to understand the LGBTQ community even more and fully immerse myself and celebrate that pride with the rest of the world. To no longer feeling ashamed.

What’s the biggest hurdle you face as a queer woman of colour in the acting world?
Remaining visible and not conforming to only heteronormative roles, but also striking a balancing with not becoming the exotic current and cool alternative.

You’re an original member of the British stage show SIX. What’s it like being part of the legacy for a show that celebrates women?
It’s incredible, especially because it came from such humble beginnings. All six of us auditioned for a workshop of a new piece on the wives of Henry VIII. The piece is about the strength of six incredible women. We bonded over the material and before we knew it was this new West End show that is spreading across the globe, bringing light on female British history, and showing how wrongly judged and misunderstood these six women were.

You worked with your now girlfriend Aimie on SIX. How did you both meet?
Many people think we met during SIX but it was actually during In The Heights. She was playing Daniela, a Puerto Rican hairdresser, so the combination of the accent, the long black thick wig, the red dress and red lipstick was too much for anyone to deal with. I mean she didn’t know straight away I was totally floored by her – eventually she let me take her out!

Alongside The Bodyguard, Wild Party and Jesus Christ Superstar, you were also part of the brilliant piece Sylvia. Why do you think this show connected with people so much?
Just like SIX, Sylvia is a brand new British show with women at the centre fighting for identity and a voice. Sylvia Pankhurst is very much known as Emmeline Pankhurst’s daughter but people don’t really knew her story. When you have a piece saturated in enigmatic British funk, hip-hop and soul, a piece conceived and written by two powerful females who focus on the journey for the right to vote in the country, I guess it’s totally refreshing for the British public.

Taking things to your personal life, what was life like growing up with your dad who is a Jehovah’s Witness?
My dad found ‘the truth’ when I was nine and so I was quite young and my mother and father had actually divorced by then. I’d fly over to Bermuda to visit him for the summer and be engulfed in this different world that included going out in the ministry, knocking on doors and going to meetings with the brothers and sisters. I’ve never had a birthday card, Christmas card, and hardly any presents since I was nine from my dad. It was a strange contrast to my life in London with my mum and stepdad. I guess I always wanted to please him and do what he thought was right and I can honestly say I came close to wanting to become a Witness. Even now, I appreciate their values and respect their belief in the Bible as God’s word, but unfortunately it’s too much of a conflict with my sexuality, my spirituality and overall my identity.

What’s next on your list of projects or roles you’d love to tackle?
I’ve got to be involved with James Bond someday. It’s always been one of those ambitions. Hint hint, wink wink. Congrats to Lashana (Lynch). She’s definitely one of those women who are paving the way for black female actors. Next up would be anything that is gritty, uncomfortable or action led. I’d love to be in a comedy, albeit I don’t know if I’m that funny… 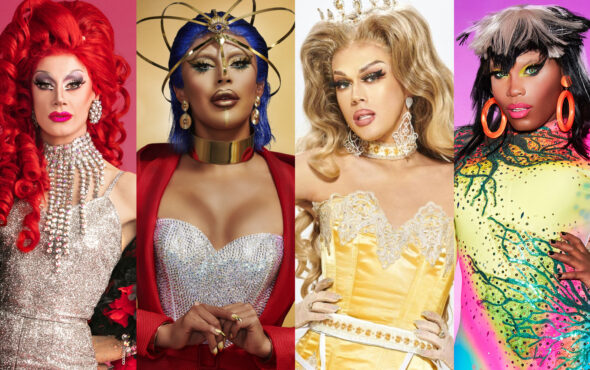