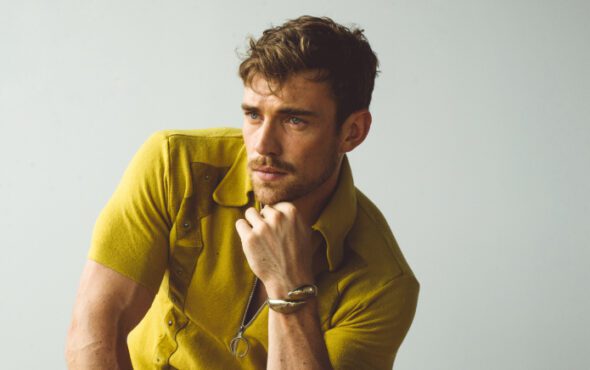 Zane Phillips’ character in Fire Island is a far cry from his brooding yet loveable demigod on Legacies.

The actor, who recently rose to fame as Ben/Prometheus on the The CW fantasy drama, is making his feature-film debut in the Andrew Ahn-directed comedy, which launches 3 June in the UK on Disney Plus.

Inspired by Pride and Prejudice, Fire Island is led by Joel Kim Booster (who also wrote the film) as Noah, who embarks on a week-long vacation with his queer circle to the titular LGBTQ+ hotspot in New York.

In the brand new issue of GAY TIMES, Zane reveals that his character Dex is a “sex-positive man” with an OnlyFans who ‘thinks’ he’s socially progressive.

“There’s a certain brand of boy where they’re good-looking and know the power that comes with that,” he says, “and they become uncomfortable when they can’t really express that power.

“Here’s the thing, I play the character, so I will tell you that my own chronic insecurity is the only thing keeping me from being like this person. He’s very physically confident. He’s there to be the drama, honestly. Shit gets to go down.”

Zane says he manifested a role in Fire Island after hearing of Joel’s intention to make a gay version of Jane Austen’s iconic novel. “I didn’t know [Joel] before doing this project, but I followed him. I was like, ‘I wanna be in that.’ I saw myself as more of a Jane at that point, but whatever. I had never wanted to be part of a project more,” he gushes. “They took a chance on me, despite having very few credits to my name!”

For Zane, it was comforting to be surrounded by members of his own community on the set. He says of a prior conversation with Ahn: “Just being able to say, ‘I don’t have to worry about how my voice sounds like, right?’

“Even within our own community, we’re always fucking censoring ourselves and making sure that we’re living up to an ideal that comes from outside the community. We’ve all internalised it and now we’re torturing each other at any given point.”

One of the central themes of Fire Island is how queer men oppress one another, but more importantly, the film portrays the beauty of being LGBTQ+ and the chosen families we make along the way, rather than the constant strife.

“To show a queer space in such a loving way… It feels almost like, dare I say, The Birdcage,” Zane continues. “It shows a queer space with such love and makes you want to be there. It’s very unique and powerful, and it looks gorgeous.”

On 12 May, it was announced that Legacies will end with its current fourth season.

In response to the news, Zane told fans on Twitter: “Not sure if I can quite say the right thing here – this show and universe means a lot to so many different people and I’ve had the blessing of being just a small part of it – but to everyone, from the team at Legacies to the fans, I just wanna say thank you.

“For making me feel both welcome and celebrated. I’m grateful we got the story that we did.”

Zane then praised his “number one” co-star Ben Levin, who plays Legacies’ resident werewolf Jed and his on-screen love interest, saying he “would have done many more seasons with ya, gladly”.

For making me feel both welcome and celebrated. I’m grateful we got the story that we did. This will always represent something really meaningful to me ❤️special shout out to @thebenlevin for being My Number One – would have done many more seasons with ya, gladly

Ben and Jed’s relationship made history for The Vampire Diaries franchise as the first MLM romance. Because of this, their relationship has been heavily championed on social media, with fans giving them their own ‘Bennifer’-esque ‘ship’ name: ‘Benjed’ or ‘Jedetheus’.

Although Zane admits he’s “truly terrified” of looking at social media due to his “bad social anxiety,” he’s grateful for the outpour of love for his character.

“I’ve already had people reach out to me and say, ‘I don’t know how I feel in my life and this storyline is huge to me…’ I do read things and take it to heart. Every single queer story is important, but it helps bring a feeling of meaning to what I do, and a feeling of purpose to something that I enjoy doing, which is acting and being a performer.

“This doesn’t exist in a vacuum, this does have material importance.”

You can read our full interview with Zane Phillips via the GAY TIMES app, Apple News+, Readly, and Flipster.