Hilary Duff has expressed her gratitude to the LGBTQ+ community for continuously supporting her career.

Since her debut in the late 90s with Casper Meets Wendy, the actress and singer has developed a passionate queer following thanks to roles in Disney Channel’s iconic Lizzie McGuire series and TV Land’s Younger, as well as films such as The Lizzie McGuire Movie, A Cinderella Story and Material Girls.

The LGBTQ+ community has also rallied behind Hilary’s successful pop music career, which includes fan-favourite anthems such as Come Clean, What Dreams Are Made Of, With Love, All About You and Sparks.

With 15 million records sold worldwide and four consecutive top five albums on the US Billboard 200, including her number one smasher Metamorphosis, Hilary remains one of the best-selling Disney Channel stars of all time.

Ahead of the release of How I Met Your Father, which sees Hilary in the lead role as Sophie, we asked the star if there was a particular moment in her career when she first realised she had a devoted LGBTQ+ fanbase.

“I mean, I felt it from Lizzie [McGuire],” says Hilary. “More so when I started my music career. Then probably the most when Dignity came out, when I started leaning into a little less rocker and a little more glam vibes! I don’t know, it was never like a moment of me realising, I think it just always was.”

Two of Hilary’s childhood friends are gay, “so it’s always been really normal for me and I think it’s crazy that we’re still normalising it. I mean, it’s a great thing but its just taken far too long. I can’t believe it’s even a topic still.”

She remembers a show at G.A.Y in London during her Dignity era – which recently went viral on TikTok after fans imitated her infamous With Love choreography – where she watched in awe as drag queens performed her biggest songs.

“I was like, ‘Oh my God, this is a wild wild scene!’ and they were so much fun!” she tells us. “I really feel like the whole entire gay community supported me from the very, very beginning when nobody would take me seriously as a singer.

“So, I feel like I owe the community everything.”

Hilary, LGBTQ+ icon, adds: “I feel really lucky, because I can’t tell you the amount of times people have come up to me and been like, ‘You helped me come out,’ ‘You helped me this,’ ‘You helped me that.’ When I’m writing an album or singing a song, you don’t really realise all the people you’re touching. 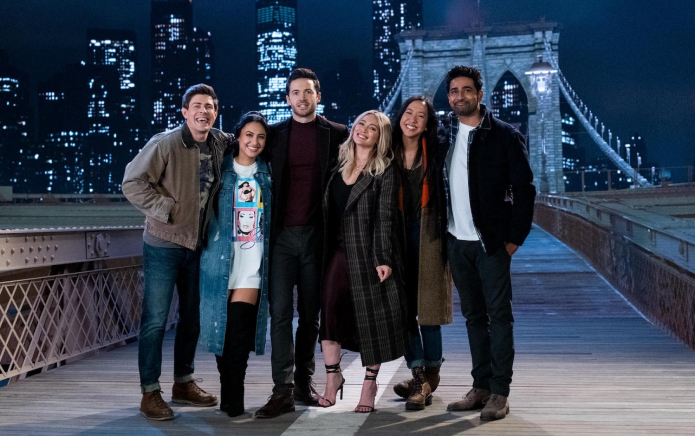 “But that particular community is just so vocal for my career, being there since Lizzie. Lizzie really hit at a time where they were forming who they were, and for whatever reason they felt like she was a safe space or I was a safe space to be right there along with it, confide in or be a friend to. And for that I’m extremely grateful.”

Hailing from Isaac Aptaker and Elizabeth Berger, the same duo behind This Is Us and Love, Victor, How I Met Your Father is a standalone sequel to the beloved Emmy Award-winning series How I Met Your Mother.

The Hulu comedy also stars Christopher Lowell, Francia Raisa, Suraj Sharma, Tom Ainsley and Tien Tran, the latter of which makes history as the franchise’s (can we call it that?) first major openly queer character.

See below (or here) for our full interview with Hilary, Chris and Tien.

The first two episodes of How I Met Your Father are now streaming, only on Hulu.