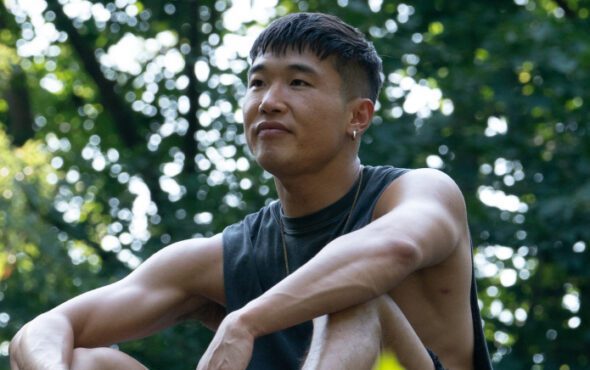 Joel Kim Booster says a sequel to Fire Island is “not off the table”.

Released on 3 June to universal critical acclaim, the Pride and Prejudice-inspired rom-com follows two best friends (Booster and Bowen Yang) as they embark on their annual weeklong vacation to the titular gay hotspot.

Fire Island, also written by Booster, has been lauded for its rejection of harmful queer trauma tropes and for its celebration and glorification of LGBTQ+ culture (and Marisa Tomei’s Academy Award-winning role in My Cousin Vinny, of course).

Since the Searchlight Pictures film launched on Hulu in the United States and Disney Plus in international territories, viewers have been ‘demanding’ a sequel on social media, (See below.)

The people demand a FIRE ISLAND sequel starring Bowen Yang’s character but it’s based on “Sense and Sensibility” and called PROVINCETOWN. pic.twitter.com/jSKmOiCWoL

Such a classic rom com.

So like when are we getting that Fire Island sequel

And of course, forever proud of Conrad Ricamora for being an incredible Darcy. THE ICE CREAM, the push and pull of his relationship with Noah, the genuineness that eventually breaks through. Always loved a Darcy but Conrad pulls it off so well. FIRE ISLAND SEQUEL, WHEN???? ❤️❤️❤️ pic.twitter.com/tzk667tLFT

oh my god this movie was great 😭😭 fire island sequel WHEN

So the Fire Island sequel can go 2 ways. Ether we get a Mykonos/P town vacation. Or a Crazy Rich Gay Asians sort of thing and I would love to see it! pic.twitter.com/K237bJJ581

Fortunately, Booster says a sequel or a spiritual sequel set in another popular gay destination, such as Mykonos or Puerto Vallarta, and starring the original cast is a possibility.

“Yeah, a real anthology series!” he teases. “While I don’t know that I necessarily feel all the way inspired to write another gay vacation movie at this time, I would definitely do anything to work with this cast again.

“Maybe what will happen is I’ll do an And Just Like That… sort of style film in 20 years from now. We’ll all return to Fire Island and we’ll see where these characters are in 20 years.”

Andrew Ahn, director, also tells GAY TIMES that he would “totally love to hang out” with the cast and crew for another film.

“I think, for me, there’s something really special about that group of friends, both as characters and also as people,” he says.

“I really hope that we get to hang out again and at the very least, maybe we can actually just go on vacation and not have to make a movie while we’re doing it. But, if we get to do both of those things, even better.”

Ricamora, who plays Booster’s love interest Will, is also “100% on board” for a sequel set in the aforementioned gay destinations.

“As long as they book my plane ticket! We have to specifically shoot it on location, in those places,” he reveals, “because I’ve been dying to go to all those places. To be able to spend another shoot with everybody that’s in this cast would be a dream come true.”

In his cover interview for GAY TIMES, Booster says the film stemmed from his need to reassure queer people of their worth.

“I remember sitting, terrified as a 16-year-old like, ‘Oh my god, what kind of world is waiting for me out there as a gay person? Is there happiness out there for me?’” says Booster.

“A big part of wanting to do this project was for me to say, ‘You will find your queer family, and through those people, you will have all of these wonderful experiences and create such an amazing tapestry of joy in your life.

“Not just “despite being gay”, but because you’re gay.’ That’s really what I wanted to get across with the movie.”

You can read our full interview with Joel Kim Booster and the cast of Fire Island via the GAY TIMES app, Apple News+, Readly, and Flipster.