Released to universal critical acclaim, Cicada is based on Fifer’s personal experiences with being molested as a child, and subsequent PTSD, as well as Brown’s trauma from being hospitalised in a drive-by shooting.

The film presents semi-fictionalised versions of Fifer and Brown as they reenact their whirlwind romance, including how they first met and helped each other overcome their traumatic pasts.

With Cicada playing various LGBTQ+ film circuits since it premiered at Outfest in 2020, we asked Fifer and Brown if they’ve heard from audience members who have experienced similar trauma to Ben and Sam.

“Both of us have got a lot of DMs,” said Fifer, who made his directorial debut with Cicada. “We released virtually, so when I was working on this film I always pictured just one hug from an audience member.

“We had a premiere in New York and that one moment, the first guy who came up, made it all worth it. But the community is so large and so quiet, I think a lot of people might watch the film and not want to be like, ‘Oh yeah, I was molested.’

“It’s not that kind of story. Sheldon, remember that one guy in the beginning who hit us both up? He was Black and had been molested and had been in an interracial relationship. It was so bizarre, he had gone through everything.” 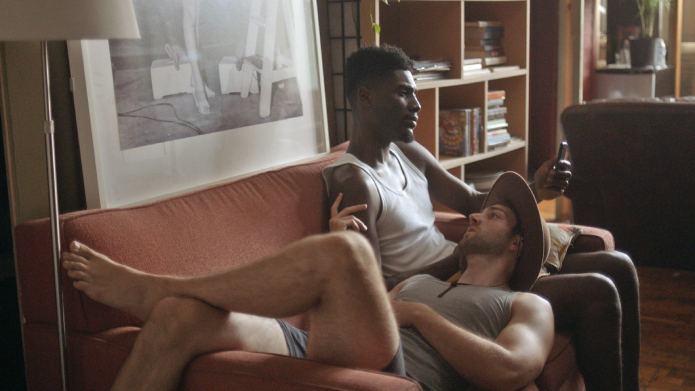 Brown, who also explores the intersectionality of being a Black gay man in the United States in the film, said: “These are experiences that many people face, whether you’re queer, or whether you’re dealing with trauma in the ways that we go through or not, and rarely do we ever get a chance to see realistic queer characters, played by queer people on screen, telling truths.

Brown continued to describe Cicada as a “universal” film featuring intricate themes that “even extends outside of trauma that I feel so many people can relate to, and it’s fresh because people haven’t seen that.”

He added: “I hope that it continues to grow and leave a footprint on people.”

In our interview, Matt and Sheldon also reflect on the drama’s rare depiction of an interracial relationship, why reliving their trauma was a “cathartic” experience for them and their hopes for the future of queer storytelling.

You can read our full interview with Ben Fifer and Sheldon D. Brown via the GAY TIMES app, Apple News+, Readly, and Flipster. The issue also includes interviews with Olympic athlete Gus Kenworthy, Queen of the Universe winner Grag Queen and World of Wonder co-founders Randy Barbato and Fenton Bailey.