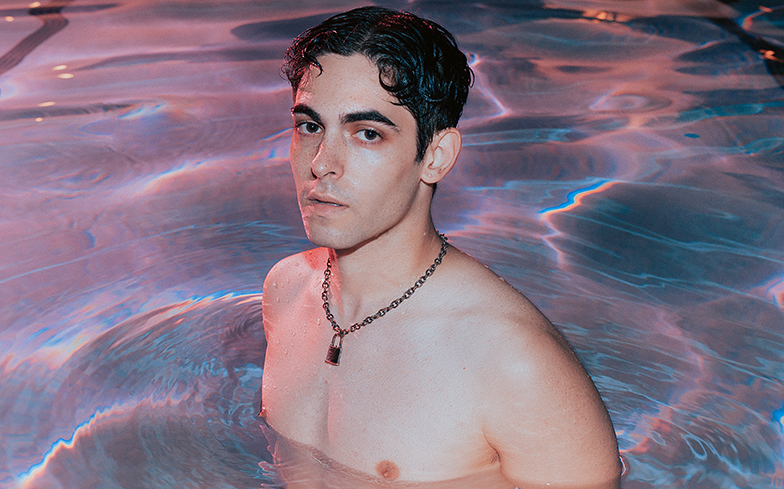 “To be an artist you have to be real and authentic. People admire that.”

Elliot Jones is a pop star for the Lana Del Rey generation. His latest single I’m In Love is an unashamedly joyful queer love song that blends silky vocals with hazy dream-like production and an irresistible chorus that’s begging for mainstream radio play.

“I’m very ambitious when it comes to love,” he says of the track. “I romanticise something that hasn’t even happened yet, or fantasise about what could be, so I really just wanted to put that feeling into a song. It’s a reflection of how stupid in love I get.”

To celebrate the release of I’m In Love, we spoke to Elliot about the rise in openly queer artists breaking the mould, the wonders of being gay, and the ‘hypnotising’ albums that defined him when growing up.

How would you describe your sound?
Well now it’s really heading into a dream-pop world. It’s definitely still pop, but I’m venturing into that dreamy sound, with a rhythm and a beat to it.

Your new single I’m In Love is great. What’s the story behind it?
I’m very ambitious when it comes to love. I romanticise something that hasn’t happened yet or fantasise about it, so I really just wanted to put that feeling in a song where it’s like, you’re super crazy about someone you don’t really know, and that initial lustful feeling. That’s why it sounds as dramatic and overblown as it does. It’s a reflection of how stupid in love I get.

I feel like a lot of young gay men are like that when it comes to relationships. Why do you think that is?
I don’t think we have a choice! There’s not as many options so we just have to dive in. I don’t know, I would actually say we’re kind of the opposite – I feel like gay men don’t fall in love easily. The stereotype is that lesbians fall in love easily, but gay men are kinda more like, ‘Let me scour the oceans and settle down when I’m 55’, so I don’t know… [Laughs] I guess everyone is different. I think gay artists are like that for sure, especially if you think of people like Sam Smith and Frank Ocean. Maybe gays are emotional in general, so when you’re an artist too those feelings are heightened.

When did you first decide that you wanted to make music?
I was always a little attention seeker as a kid, and I was very into the arts. I was a theatre student actually for 10 years, so for a while I did think I was going to be an actor, that’s where I was heading, but as I was getting into acting the thing that was missing for me was that I couldn’t express myself, I was just playing a character when I felt like I had so much to say and express. If I wasn’t writing the script then I was just reading other people’s lines, but as an artist I want to write my own lines, so that’s why I ventured into music. I was like 16 when I got the idea that music would be my thing.

Who would you say some of your main influences are?
The main big ones in terms of lyrics are Lana Del Rey, Frank Ocean and Amy Winehouse. I don’t think my music sounds like them, I think the music is more geared towards dance-pop artists like Years & Years. I was definitely trying to do something a lot more experimental with this song, so all the pop girls like Charli XCX and Tove Styrke and even Tove Lo are definitely influences too.

It feels like there are so many more openly queer artists popping up over the last few years. Why do you think this is happening now?
I think there are a few reasons, obviously we’re growing to be more open and accepting towards queerness, and because of that people in the entertainment industry are able to say they’re a gay songwriter, or a gay choreographer, or a gay record executive, whereas before we were kind of on our own. Now there’s a sense of community in the music industry so everyone can flourish together. Also, I think people are more interested in it now, there’s this whole side of life that wasn’t spoken about in the mainstream and now people want to hear about it. Just look at Lil Nas X.

There’s been a lot of dialogue lately about queerness becoming more mainstream, and as a result being co-opted by straight artists…
I think that’s been going on for a long time, it’s not something particularly new. Gay clubs in New York invented disco and house music, and then you look at all the top DJs and it’s all straight white men. So I don’t necessarily think it’s something new.

I think the difference now is that queer culture is starting to be seen as cool – in the past it was taken from and then hidden away, but now it’s being brought into the spotlight.
Well yeah, that’s the good side of it. As long as people are getting credit for it, as long as all these female pop stars are bringing the queer artists up with them – which I think they are doing – then maybe it is a good thing.

Was there ever a part of you that felt you shouldn’t be open about your sexuality when it comes to the music?
I’ve never been worried about that, really. It’s one thing if you have a record deal on the line and people are telling you not to come out, but I have nothing to lose. Obviously there was a sense of pressure while growing up and coming out, but that’s never really had anything to do with my music.

That’s good to hear. One of the traditional arguments that’s stopped musicians coming out as gay when they’ve achieved success is that they’ll no longer be relatable to a mainstream, heterosexual audience. Do you think that’s a valid concern anymore?
The thing is, I don’t want to say it’s a valid concern and that people shouldn’t express themselves to the fullest just to please other people because obviously art has to be truthful, but then the reality sets in and you do have to think, ‘Will people actually relate to this?’ But no, you can’t censor yourself to please other people – and I think people like that! Especially nowadays, people like uncensored art and saying it how it is. I feel like people can read when something’s not authentic. When I chose to come out and do this, I knew that to be an artist you have to be real and authentic, and people admire that in artists.

We’ve talked about some serious topics, but it’s important to celebrate queerness as well. What’s your favourite thing about being part of the LGBTQ community?
Oh man, there’s so many things. First of all, I love that everyone has a story, there are challenges or difficulties they’ve faced which makes us all so resilient. And I love that it’s people from every part of the world, from every walk of life, it’s so different. Everyone has their own story. And we’re very creative! I don’t know why being queer and being creative goes hand in hand, but I’m glad it does.

With the age of streaming we’re living in, it feels like just focusing on singles is the way forward. But do you still think there’s value in releasing albums that have a solid concept and structure?
I do like when an artist is just releasing singles constantly and keeping us in the loop with where they’re at, I love how Ariana Grande is doing that and every month or two she releases something so you know what she’s working on, but at the same time I also love to just be in one person’s mindset. I love listening to Lana Del Rey or Frank Ocean and be in that person’s headspace for an hour or so. I do think there’s still value in that. We’ve been saying for a while that the album is dead, but does it really ever die? It’s turning into something else, but people still like to sit down with more than one song. And people like the deep cuts – especially the gays.

Are there any albums that defined you as a person?
Born To Die by Lana Del Rey, Channel Orange by Frank Ocean, Back To Black by Amy Winehouse, Pure Heroine by Lorde, anything M.I.A. ever did like Arular. I could go on and on, but those are the ones that I would listen to in high school, I’d be sitting on the bus in a dream state listening to them, especially Lana and Frank. I remember being so hypnotised by them, and you really feel like you are them when you listen to their music.

I remember being like 16 or 17 years old and listening to Lana Del Rey imagining that I had a daddy.
Right? Exactly! That’s still a huge influence for me when I write, I love those really dramatic and cinematic lyrics.

What are your plans for releasing new music? Can we expect an album soon?
I hope an album, yeah! You can definitely expect more singles to come, but an EP or an album is up in the air at the moment. I’m not gonna pull a Kanye or a Frank Ocean and say something’s coming when it’s not. But hopefully soon! I’d really like to do that. I have all the concepts for an album, it’s just about putting it all together. It takes a lot of time.