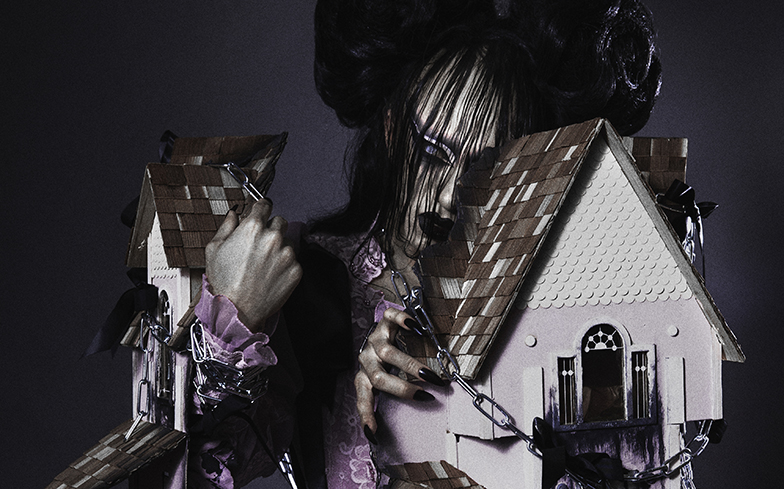 Vander Von Odd is one of the most exciting faces of alternative drag – and proof that the artform isn’t a one-size-fits-all box.

The gender-queer performer took home the crown on the first season of The Boulet Brothers’ Dragula – the gritty little sister of reality show behemoth RuPaul’s Drag Race – throwing a middle finger to glam, decorum and heteronormative expectations, and they’ve continued to shock the world with their horror-inspired looks and performances in the years since.

“There was a huge pressure to be palatable in order to be employable when I first started out,” Vander says when we ask if they faced opposition for being an alternative queen. While they’re celebrated for their aesthetic now, they know not everyone is so lucky – and they want to change that.

“Dragula celebrated me and my work in its raw form and so that pressure immediately melted away. I hardly ever face criticism now, but I was on a TV show that expedited my career and gave me a following and the privileges that came with that were immediately apparent. I may no longer face that criticism, but others definitely do.”

We spoke to Vander about the rise in popularity of alternative drag, what effect they think RuPaul’s Drag Race has had on queer scenes, and why all types of drag are valid.

How did you first get into the drag scene?
The traditional way: I went to as many shows and events as I could in drags, took every tip spot and unpaid gig that came my way until I started to make a name for myself. About a year and a half in The Boulet Brothers’ Dragula happened and it fast-tracked my career immensely.

Where do you get your inspiration from?
I grew up in a very small border town in the desert. I had no access to the internet or life outside of my town for that matter. What we did have was a mom and pop video store, a small movie theatre, and a public library. I coveted movies and books because they expanded the very limited possibilities of my reality and so I fell in love with storytelling. Now, as a filmmaker and a drag artist, it’s my job to tell stories and I build them through the lens of all the stories that fuelled me.

What’s the most important message you want to share through your drag?
It’s a message of autonomy, of empowerment, of self, and of shamelessness. I think drag performance, at its core, forces us to bare our truths and face our fears and it takes a certain kind of nerve to get in drags and step out into the world and onto a stage. It’s a powerful statement of self and that’s what I connect with in any drag performer, regardless of genre or style. When I’m on stage I am God, and I am my own best creation. I think everyone should allow themselves to feel this way.

You’ve mentioned before that you’re very inspired by Barbette – do you think younger generations have a responsibility to learn about historic queer figures like them?
More importantly I think it’s our responsibility to share this knowledge and encourage young people to seek out queer history. I’ve had many a queen roll their eyes at me when I didn’t catch a reference or recognise a name. It deters people from wanting to know and so I make a conscious effort to make people feel excited about historic queer figures and events. A few of my heroes are Sylvia Rivera, Barbette, and Fakir Musafar and I would encourage anyone to look into their incredible lives.

Of course we don’t expect you to appear on Drag Race, but what is your relationship with the show? What impact do you think it’s had on the drag scene?
For me it’s clearly had both positive and negative repercussions. It’s a situation where you take the bad with the good. There’s no denying that Drag Race has thrust drag back into the public spotlight and drag artists by large have benefited from the uprising in interest. That being said, commercialising an artform cannot go without consequence and I think shows like The Boulet Brothers’ Dragula are shifting the culture and the attention onto the vast and diverse beast that it’s always been.

How important do you think it is to have shows like Dragula that celebrate alternative types of drag and queer performers?
I can summarise this in one recurring anecdote. I’ve been booked in many cities, particularly conservative or pageant heavy cities, where alt drag artists have approached me and said the exact same thing: “No one ever booked me in my town until Dragula happened.”

Do you think we’re seeing a rise in performers embracing alternative drag queens and shows?
Absolutely. That comes back to the power of representation and what it does for underrepresented communities. Even drag bookers who are only interested in alt queens because of the rise in popularity are still booking them and as gross as that sounds, that’s still some weirdo getting paid for their art where they weren’t before and I think that’s fucking cool.

Your look in the photoshoot with the doll’s house is incredible. What’s the story behind that?
I’m extremely lucky in that I have amazing parents who saw me through the awful experience of growing up queer in a small, conservative town. As they get older the idea that they won’t always be with me becomes a little more real and it terrifies me. My dollhouse performance essentially goes through the motions of grief and having to let go. The dollhouse is painted in the color scheme of our first family home and it’s the memory of that time with my parents. I’ve chained the memory onto my body, refusing to let go, but over time the house begins to deteriorate and rot. In the performance, I break the house down the center, undo the chains, and set it on the floor where I say goodbye to it and then walk offstage, leaving it behind me and allowing it to be a memory and not a heavy weight that I refuse to let go of.