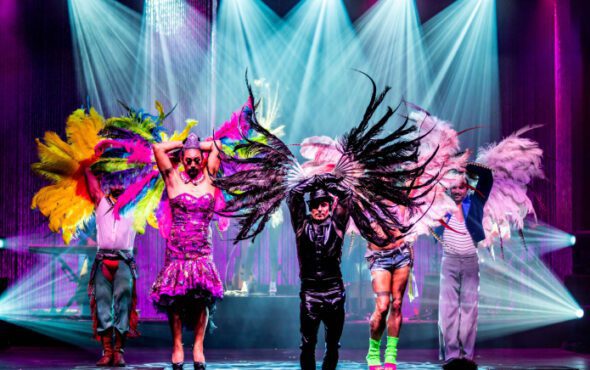 We’re not quite sure how to explain Briefs, for those who’ve not seen the Australian troupe before. It’s quite the theatre spectacle – part burlesque, part cabaret, part circus, part comedy and a whole lot of fun. For their new show Bite Club they also have a live band, fronted by vocalist Sahara Beck who performs a number of original songs. During the show they describe the performance as a series of real-life music videos and that’s a pretty good summary – each song is accompanied by something unique and rather wonderful indeed.

When we walked into the Queen Elizabeth Hall the show had already started, as the performers – in rather eye-catching attire – were working their way around the auditorium. Initially we weren’t quite sure what they were doing but it turned out they were selling raffle tickets to the audience. The raffle is a bit of lighthearted fun, and those who don’t win can partake in the pain of jealousy (which is actually really quite entertaining). The winner is unveiled during the evening with their own amusing set-piece.

The show itself is a real mixture of performances – we didn’t know we needed to see sock puppets or a treadmill on stage until we’d seen Bite Club. We received an email warning that the show contained full-frontal nudity – there is actually not very much at all, although when it arrives, it is not unwelcome. Otherwise there’s a mixture of aerial routines, juggling, choreographed dance numbers and a whole lot more besides. The original songs are great and Sahara is a fantastic vocalist – we’d happily sit through a concert of these songs, and having such impressive visual performances alongside the music is an absolute treat.

We had a really wonderful evening with Briefs: Bite Club. The live music element is a big departure from their usual show and this may not be for everyone, but we thought the new direction worked well. It’s a pretty unique concept, bringing lots of different ideas together, and the standard of the performance is very high throughout. If you’re able to catch it this week in London, or next month at the Fringe in Edinburgh, you won’t be disappointed – it’s a great fun night out.