Ashley Roberts: ‘Burlesque film was based around story of Pussycat Dolls’ 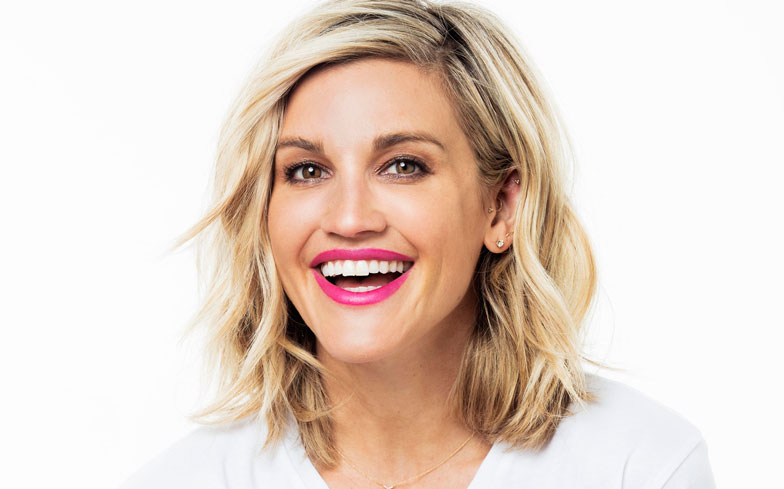 Ashley will make her premiere alongside RENT and Eurovision star Lucie Jones in Sara Bareilles’ hit musical – the pair will play Dawn and Jenna for a limited season this summer, starting 17 June.

No stranger to performing on stage, Ashley took to the Strictly dance floor and showed off her best Buttons moves – taking her all the way to the final. But it wasn’t the idea of singing or dancing that sold Ashley on joining the cast of Waitress.

“I can of course sing and dance but I really love comedy and taking the piss out of myself and being a bit silly,” she tells GAY TIMES. “This really was a great role for me to show that side and it’s just a kick-ass show so I can’t wait to eat pie while you watch the show – which is always a bonus!”

We speak to Ashley about joining the cast of Waitress, her very own Pride pie, and she reveals that Christina Aguilera and Cher’s iconic movie was originally based around the story of The Pussycat Dolls. *screams*

Congratulations on making your West End debut in Waitress. Are you excited?
I am all the way up there. When I went to see the show, Sara Bareilles was the seller for me. I love her music, she’s fantastic and an amazing singer/songwriter. And then to go to the show and be pleasantly surprised at how comedic it is. The script is great and it’s so clever how they manoeuvre the sets around. It’s such a great show so I’m super excited. And to get to play Dawn who is such a quirky little eccentric person, it’s going to be a lot of fun!

Did you take a lot of convincing to step into the world of theatre?
Well I’ve got to be honest, musicals weren’t a big dream of mine as a kid. I wanted to sing and dance and listen to pop music and I had that, so it wasn’t until I did Strictly [Come Dancing] that I was like, ‘I really love performing’. I love each week coming up with these characters. David, who is an amazing casting director, asked, ‘Will you come see Waitress and see if you’re into it?’ I don’t know if people fully know, I can of course sing and dance but I really love comedy and taking the piss out of myself and being a bit silly. This really was a great role for me to show that side and it’s just a kick-ass show so I can’t wait to eat pie while you watch the show – which is always a bonus!

Do you like doing things that are perhaps unpredictable or things that others might not expect from you?
What I like is to be able to be creative and to dive into different avenues that really get to showcase all the different sides of my personality, I guess. I’ve been very fortunate to get opportunities to come in and try different things under the entertainment umbrella. This really spoke to me. Maybe people that don’t know me from my public figure, but people who do really know my know this side of me so it’s now getting to showcase that. Maybe it is unexpected to my audience, but people who know me go, ‘Oh my God, this is perfect!’ I love the idea of challenging yourself because the West End is a huge platform that can make you hugely vulnerable as well.
Yes, hunny, it is intimate. You are up in the situation and, yeah it is! The thing is, it’s nice to feel stretched a bit. If you love something and have a passion for something, it’s fantastic and you can become a teacher or guru or whatever is your craft. But to be able to stretch yourself, dive in and prove to yourself that you can do it is really rewarding. And then you get to meet so many different kinds of people in the process. The cast have been really warming to me which has been great.

Are you excited to get to meet fans and more of the British public?
Yeah, I am! The UK has been so amazing to me, I feel like I’ve been adopted by the Brits. I fully accept it. I’ve been so gracious to the opportunities that I’ve been given over where. It’s home to me now and… I like it!

Waitress also champions female empowerment at a great level. Did this message connect with you when you watched it?
Absolutely! What’s great as well about this show is that there’s some real and raw flawed moments of being a human and walking through all the experiences or yourself or maybe somebody you know, loved one or relative – whatever it might be. You have that to connect to you that humanistic story, but then it’s also got the comedy that lifts the spirit and great music. I feel like it really ticks all the boxes.

Related: Gay Times is partnering with musical Waitress for a special Pride event

GAY TIMES is joining Waitress for a karaoke in June. With that, what would go into your very own pride-themed Waitress pie?
My Pride pie… it would definitely be colourful and full of fabulousness… maybe a bit of latex. Sure, why not. Some sparkles, some unicorns and some chilli flakes. And boots on top. Like at the knee ones.

We should totally make this!
Now that would be dangerous!

Was there ever a discussion about a Pussycat Dolls musical happening?
Erm… was there ever a discussion? There actually might have been at some point. I think the story Burlesque that Christina Aguilera started was kinda based around our story. I think they may have tried to create something but it just never happened – but it could! It’s a great idea. Would I want to play myself? I don’t know. I think I’d like to sit back and watch.

Finally, why should fans come and see you play Dawn in Waitress?
I’m not just saying this because I’m in it, but it’s a fantastic top quality show. The comedy is so fun, the music is fantastic and there’s something in it for everybody. I really do think that. It’s just a good show. You leave feeling good!