Amanda Lepore on Tr*mp, trans progression and why she’s such a f*cking legend 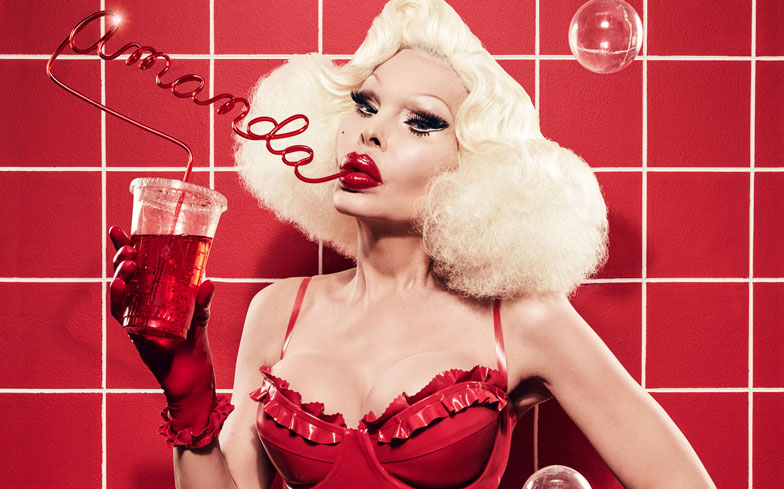 Amanda Lepore is an icon… alongside being an entertainer, model, muse, author and blonde bombshell. Her words, not ours – not that we’d disagree with any of the previous.

Her legendary look, live performances and outspoken championing of trans rights has had the fashion world and the queer community as her biggest supporters since day one. Unapologetically not giving a fuck about the societal norms or approaches towards plastic surgery, the David Lachapelle favourite has defined her own outlook on the world.

“I would never let anything get in my way… I just did my thing,” Amanda tells Transparent actress and former GAY TIMES cover star Trace Lysette when we bring the pair together for Amanda’s cover interview. And while they share equal amounts of affection and mutual respect for their successes, their unity comes strongest when talk turns political – and Amanda goes in hard on the current White House resident.

“I think that we have such a strong base that not even the President can get in the way at this time,” Amanda dismisses before swinging for the knockout punch on Trump. “I don’t really feel threatened by him, I just think of him as an asshole. I mean I just don’t even deal with him, like he doesn’t exist.”

Out of the blocks and ready to take down the haters, Amanda and Trace spill the T on Trump, trans progression and why she’s such a fucking legend. TL: You are an icon! What do you think makes people connect with you on so many different levels?

AL: I think it makes people wanna be free and be themselves. I guess that applies to all different sorts of people. I think people that don’t fit in maybe, or don’t want to be basic.

TL: Yeah, right. I mean why be basic when you can be different and be yourself! TL: Throughout your career, you’ve been outspoken and a pioneer for queer rights. How far have trans rights come in your lifetime?

AL: I would never let anything get in my way so I didn’t really think about it, I just did my thing. I do think that it’s much more in the media with Instagram. There’s more social media, I think. I became known from modelling with David Lachapelle and before that from talk shows.

AL: That was a lot of exposure and I think Instagram and social media helps a little bit with that. Almost any little kid can find someone online to relate to on any different level.

Related: Gottmik opens up for the first time about being a trans male drag queen | Amplify by Gay Times

TL: Totally, it’s much more accessible. I remember seeing talk shows and they weren’t really the best representation of trans women. Sometimes they’d be more of a complete conversation and try to humanise the trans women… I remember you were on Phil Donahue, right?

AL: I did Joan Rivers and…

TL: You did Joan Rivers! She was a little more respectful, right?

TL: Right because you were a club kid so it was a secondary topic or not at all.

AL: Yeah, it wasn’t at all. It was more written about with David (Lachapelle), I think?

TL: We definitely have more of a conversation and laws in place in certain places in this country, not all obviously – we’ve a long way to go. I think I’ve seen progress in my lifetime.

TL: We still have a fight ahead of us! TL: What impact did David Lachapelle have on your life and your career?

AL: He had a really big impact because he really loved using me and he thought I was really beautiful but lacked the confidence for that. I couldn’t think about being a model, it was like the furthest thing from my mind. He would love me being naked so it was a freedom, kinda… it just gave me the confidence I think to be loved by the people from art, the fashion community, and good people. I’d always get nice press. It was an amazing thing and really changed my life.

TL: That’s awesome! I think that, as trans women, we don’t really grow up being validated for our beauty.

TL: Even if we get a lot of attention, we don’t always get validated for our beauty. I never really considered myself beautiful until maybe my twenties where I started to understand my own unique beauty, but it wasn’t until this year that I got signed to a modelling agency and that was a whole different kind of validation… It’s crazy how much of that we don’t get because of our journey.

AL: Oh yeah, and it has backlash, too. People would freak out about the plastic surgery but I don’t really get it anymore because everyone caught up with me. Like Kim Kardashian, Nicki Minaj and all those women.

TL: Plastic surgery has been normalised.

AL: It’s kind of a standard of beauty now and they basically do everything that I do.

TL: We were these self-made women in all aspects of our lives, right down to our bodies, and now cis women have kind of normalised surgery to a point where – and I think it’s great, I think it’s awesome – that people can do body modification to whatever makes them comfortable, as long as it doesn’t become addictive or ruin your life which is a whole other topic. I think I’m a proponent for people wanting to do what they want to do with their own body.

AL: Yeah, of course. It’s all about comfort, y’know?

TL: Comfort and self-improving. Being like who you think you are, as long as you are doing it for you and nobody else. TL: Is the rhetoric and crap that President Trump’s been spewing around trans people, trans rights and the LGBTQ community in general something that worries you?

AL: I think that we have such a strong base that not even the President can get in the way at this time. I don’t really feel threatened by him, I just think of him as an asshole. I mean I just don’t even deal with him, like he doesn’t exist.

TL: Dismiss this little blip in time that we have to deal with him.

TL: I think it’s just a call to action, if anything. We’ve seen the flow of our civil rights come and go over the years…

AL:And it makes people want to fight more, I think. We just get stronger in the end. We’re winning!

TL: Do you have a career highlight that stands out as a big moment for you?

AL: Probably going out naked. Nobody really did that before… it made people happy. It could have backfired really badly. People weren’t offended by it and really liked it. To this day, in my acts I always take off my clothes. I don’t go completely naked anymore but… pretty much.

TL: You used to do parties and get on stage fully nude, right?

AL: After I started performing, I always went out naked but I was more not naked I think in the Club Kid days, even when I go-go danced I remembered they had ‘topless night’ where the girls were supposed to be topless and I didn’t take off my top.

AL: I don’t know. Maybe the way they’re brought up? Issues? The way they live? Parents? Mothers? Jealousy? Morals? There’s a lot with it. Excess baggage? Lots of baggage. TL: You responded to RuPaul’s comments in regards to trans women last year. How do you think these remarks harmed the connection between the drag and trans communities?

AL: Well I think it’s a competition show and it’s RuPaul’s show so…

TL: I don’t even know what your remarks were?

AL: I said that I know there’s so many cis women, generic women and trans women that do drag and get dressed up. Everyone likes to be girly to dress up, not just boys.

AL: And even I got energy to dress up from biological women that were drag queens.

AL: With the hair pieces, the makeup and just really exaggerated. I loved those ‘self-created’ women and so, to me, it’s not just the boys. It’s everything but… it’s RuPaul’s show so they can do it but hopefully there’ll be spin-off shows of that where they have trans and bio-girls competing in a spinoff show or something.

TL: I would love that! I think I probably said similar remarks. I know that, for me, that drag is more of a performance. I don’t think it should be limited by who should do it. Any gender can do drag. I remember being a teen and sneaking into the gay clubs to see the showgirls and the drag queens. The first drag queens I ever met were trans women working in the clubs. Drag for me was my introduction to being a woman as a teen and expressing myself, and also my introduction to acting.

AL: Of course, like that’s kinda ironic that we can’t wear makeup and high heels, wigs, hairpieces, lashes and all that – and boys can. It’s kinda crazy. Makeup and all the stuff that goes with it.

TL: There’s some awesome cis women who do drag as well, too. It is RuPaul’s show but I hope they do begin to open the door to more and more people.

AL: Gia Gunn was trans on the show so maybe they’re opening up…

AL: Maybe they’ll just lighten up about it more.

TL: Okay so this is the last one. The word queer has been reclaimed by a lot of people in the LGBTQ community. What are your thoughts on this word?

AL: It’s definitely an old-school word first of all. It just really represents our individuality and differentness. It’s not necessarily just homosexuals but a lot of different things. I think it’s a good word.

TL: Sometimes people would mean it as an insult.

TL: You’re right, it’s definitely a good word now. Did you ever find it a put-down?

AL: It’s not a put-down like it was many moons ago.

TL: Do you identify with the word queer or do you prefer a different term to describe Amanda?

AL: I definitely am in that category but… I just feel like a woman. No matter what people identify me with or what category I am in, I still have that. I still think of myself as that so it doesn’t really get in the way. It’s a good group to be in, for sure. It’s definitely good times!

More information on Amanda can be found here.