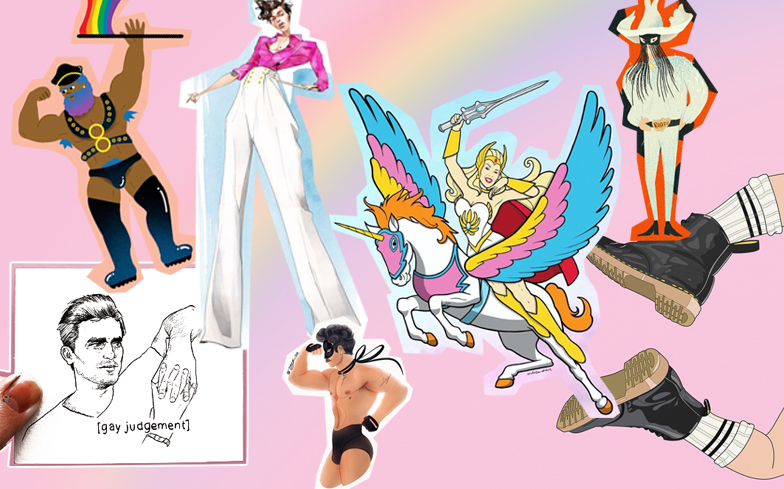 We’re always on the lookout for new profiles to follow and what better way to spread love in our community than to give that love (and those follows) to some amazing queer artists we’ve come across whilst scrolling through the gram. Here are seven we’re obsessed with at the moment.

Ever wondered what Britney would look like as a storm trooper? Well us neither TBH, but now we’ve seen it we’re completely obsessed. Manchester based illustrator Andrew Ahern is busy drawing all your fave gay icons including Miss Spears and Patsy and Eddie, all with his signature twist – luckily for you, you can grab a piece for yourself from his online store too.

When we saw London based illustrator Mark’s drawing of this iconic shady moment from Project Runway we fell in love with his work on the spot. Follow him for brilliantly witty and timely illustrations that somehow describe exactly how you’re feeling. Plus he’s just started experimenting with digital work, and we have two words… LAURA DERN.

From his ever-changing fashion illustrations of your faves Timothée Chalamet and Harry Styles, to his beautiful intricate work of hot guys in crop tops, Christian Cimoroni has been on our radar for quite some time. Most recently from Christian, a hot boys for Bernie sketch that would make us vote in a heartbeat.

Tampa based illustrator James Jeffers figures are high up there on our list of things we’re obsessed with at the moment. His style icon series perfectly depicts the guys he admires, from the legendary Mr Mercury to the artist’s fave Orville Peck. Drop him a follow.

Queer Chicano Artist Miguel Hernan’s incredible line work and illustration is completely next level. From his ability to capture figures with just a few elegant strokes, to his more intricate figures picturing heart throb cowboys and pretty boys in leotards, we want to own every piece he’s ever drawn.

Putting a cheeky spin on queer illustration, you know you’re in for something sassy from the moment you spot the name Twinkle Stinkhole. Follow him for everything from a gobstopper leather ball-gag, to a penis hot dog print we really hope he makes into wrapping paper (hello Christmas gifts), his work is wonderfully weird in the absolute best way.

Gay Stuff Studio’s bio reads ‘Celebrating diversity and love with art’ and what better way to combine two things we’re always looking for. Illustrating couples who are so rarely focused on, such as this adorable transgender guy and his girlfriend, to lesbian mermaids and Marsha P Johnson, his work is one to watch (and follow).